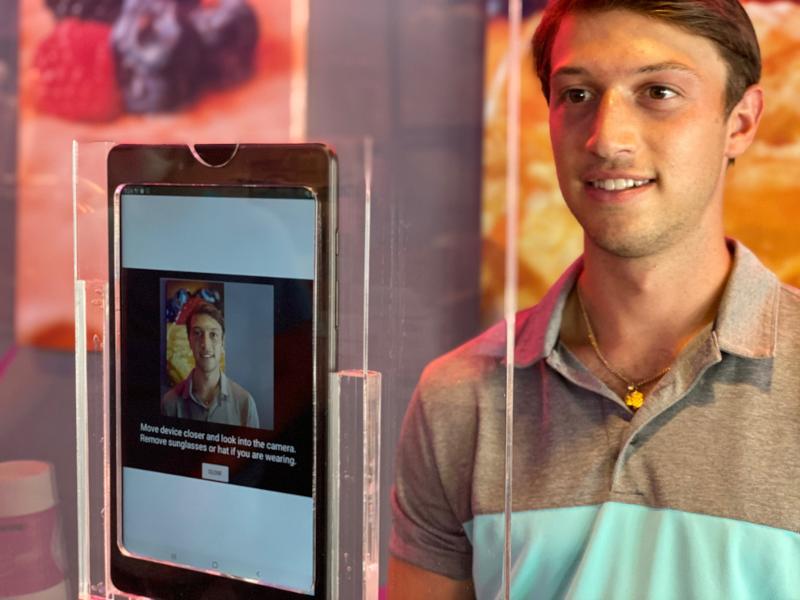 In this installment, RB takes a look at a product that allows customers to pay for a meal by scanning their face.

The technology: Los Angeles-based tech company PopID is using facial recognition technology to allow customers to pay with their face at restaurants. Its PopPay platform is in place at more than 100 restaurants, including a “dense network” of about 35 in Pasadena, Calif.

It builds off the company’s PopEntry product, which allows people to gain entry to a workplace or building via facial recognition.

Pay-by-face has been in use in China for several years. As of 2019, 100 million Chinese had registered for some form of the technology, according to business publication Nikkei.

How it works: Consumers register for PopPay and take a selfie that will identify them within the system. They can then add money to their PopPay account, which links to their bank account. Restaurants can install PopPay with tablets at the counter or drive-thru or via in-store kiosks. The customer can then order as usual and select PopPay as their payment option. The tablet will then scan their face to identify them and draw funds from their PopPay account to the restaurant.

Benefits: Pay-by-face is contactless and social distancing-friendly because the customer can pay from several feet away.

Restaurants that have used it have seen increased throughput, particularly in the drive-thru, said John Miller, CEO of PopID parent company CaliGroup. A case study of Chinese pay-by-face technology by the Nielsen Norman Group found that a transaction took between 10 and 15 seconds.

And when people log in to a kiosk using their face, they tend to spend more money, Miller said. The company reports a 4% increase in average ticket size when people have paid via a PopID account.

But perhaps the biggest benefit for restaurants is lower payment processing costs. Restaurants pay 1.6% and a fixed 10-cent fee per PopPay transaction, which is lower than most credit card processing fees. That’s because PopPay customers load funds onto their account in one transaction, so PopPay is charged just once by the credit card company.

PopPay was modeled after Starbucks’ rewards program, which has a similar function, Miller said.

Drawbacks: Consumers remain wary of facial recognition technology. Only 32% of consumers feel comfortable having their face scanned by a private company, according to a study by software-review company GetApp. That could limit the number of consumers who actually choose to use something like PopPay.

Governments are also cracking down. In September, Portland, Ore., passed one of the strongest bans of facial recognition technology in the U.S., outlawing its use by both government agencies and private businesses.

Miller emphasized that PopPay is entirely optional, and a customer can opt out at any time.

“It’s different from what other people are using facial recognition for,” he said. “This is a consumer service where you only get your picture taken when you decide you want to.”

Cost: 1.6% plus a 10-cent fee per transaction. The software and tablet are free.

Use case: California-based fast-casual chain Lemonade started using PopPay at the checkout in one restaurant about seven weeks ago and has since added it to two more.

“The guests seem to really like it, and it’s very easy for our team members in terms of how to process the payment,” said Robin Robison, COO of Lemonade parent company Modern Restaurant Concepts.

Lemonade started using PopID’s other product, PopEntry, to perform health screenings for staff after the pandemic began. Because they were already familiar with the company, they decided to give PopPay a try, Robison said.

Usage remains low. Lemonade processed 51 PopPay transactions in September across the three locations that are using it, she said. But she pointed out that most of Lemonade’s orders are digital for now as dining rooms remain closed in LA County, where all three are located.

“It is new, and it’s also new to our guests that do happen to walk in. They’ll ask about it, they’ll ask what it is,” she said. She expected usage to increase as more dining rooms open and guests become more aware of the technology.

Lemonade is still assessing PopPay, but if it continues to go well, Robison said the chain would likely roll it out to all of its 22 locations. Lemonade and its sister concept, 27-unit Modern Market Eatery, are already using PopEntry in all of their restaurants.

RB's take: PopPay certainly plays into consumers’ demand for fast, contactless transactions, and anything that helps boost throughput and reduce fees is a win for restaurants. However, it’s a still-new technology that might appeal only to a small segment of customers for now. For concepts such as Lemonade that are tech-forward, it could make sense.