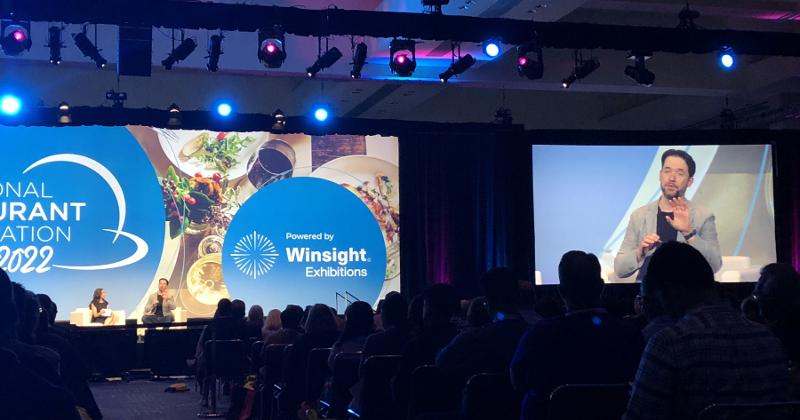 In a 15-minute stretch on Saturday afternoon, Reddit co-founder Alexis Ohanian reeled off a series of rapid-fire takes on some of the hottest topics in technology these days.

NFTs? They’re like paper, and “we just invented the papyrus.”

Web3? “Fascinating tech” that could change how artists are compensated for their work (thanks to the blockchain).

The metaverse? It already exists. “There will not be one singular metaverse. There will be just places where we spend our time and our attention.”

His comments hopefully dispelled some of the mystique around these buzzwords that have forced their way into restaurateurs’ vocabulary over the past year. The bottom line, he said, is that technology is going to continue to become a bigger part of consumers’ everyday lives.

TVs will get bigger. Sound systems will get crisper. Food will materialize almost out of thin air. “Push a button on your phone, boom, there’s a falafel.”

That portion of the presentation may have left operators in the audience feeling a little queasy. How the hell do you compete with instant falafel? But, the entrepreneur and venture capitalist said, consumers’ ongoing digital immersion doesn’t mean they’ll stop going to restaurants. It could actually have the opposite effect.

Ohanian knows a bit about restaurant technology. His first startup, My Mobile Menu, was an app that allowed people to order food via text message. Born in the pre-smartphone era, it quickly failed, and was followed by Reddit,  envisioned by its founders as "the front page of the internet."

Ohanian's roots are in the online world. (He even admitted to officiating a wedding in the online game "EverQuest" in his younger years. "I was a half-elf bard," he recalled.) Nonetheless, he said: “We are still a species that needs offline interaction.”

That element of human nature seems to be on display in restaurants right now. Despite inflation and lingering COVID fears, people are dining out at close to pre-pandemic levels. But Ohanian predicted this “euphoria stage” of pent-up demand will wear off. And the ease brought by technology will ultimately raise the bar for what people expect when they dine out. “The offline experience just has to be that much better,” he said.

That doesn’t mean consumers will only go out to eat for a 10-course meal, he said. A good experience could mean “pure efficiency” in the form of a top-notch grab-and-go operation. The point is, he said, restaurants need to be “intentional and thoughtful” about why people visit them, “knowing there is tremendous competition for attention.”

“Any restaurant that understands that deeply and then invests in that is gonna thrive,” he said.

One way restaurants can stand out, he suggested, is by taking cues from sneaker culture and its obsession with scarcity. Instead of new shoe drops, restaurants could create rotating menus or limited-run items that tap into consumers’ fear of missing out.