Police say they likely averted a mass shooting of employees and guests of a Marriott hotel in Long Beach, Calif., by arresting a cook who had shared his intentions with a co-worker to open fire at the airport property.

The suspect, 37-year-old Rodolfo Montoya, was upset over “human resource issues,” the authorities said. The nature of those employment issues was not revealed.

A search by police of Montoya’s home found multiple firearms, including an illegal assault rifle, and hundreds of rounds of ammunition. Montoya had also assembled what the authorities called “tactical gear” along with high-capacity ammunition magazines.

He was charged with possession of an assault rifle, making a criminal threat and manufacturing and distributing illegal assault weapons. Montoya’s bail was set at $500,000. 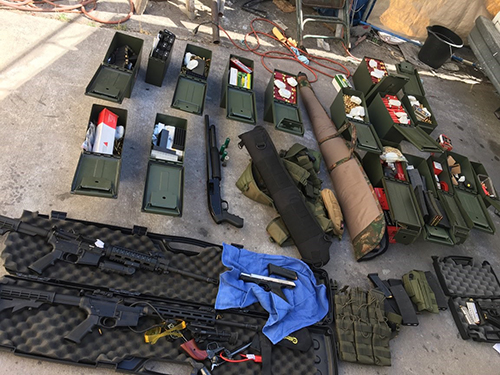 The authorities said they were contacted Monday by the hotel after management was alerted  by the hotel employee in whom Montoya had confided.

“In recent months, we have seen several tragic incidents that have resulted in many lives lost,” Chief of Police Robert Luna said in a statement, referring to such incidents as the shooting deaths of 22 people in El Paso, Texas, and nine individuals in Dayton, Ohio, both in early August. “The witnesses who came forward and the diligence of our employees involved in this investigation very likely prevented a threat of violence and saved many lives.”

A number of recent multiple shootings have occurred in department stores and retail complexes.