Restaurants added 31,100 jobs in January, according to federal data released Friday, as the industry returned to a rate of hiring that has been relatively normal for the past seven years.

But the better news for restaurants is that the economy added 200,000 jobs for the month and generated the strongest wage growth since the recession—numbers that could help support industry sales growth. 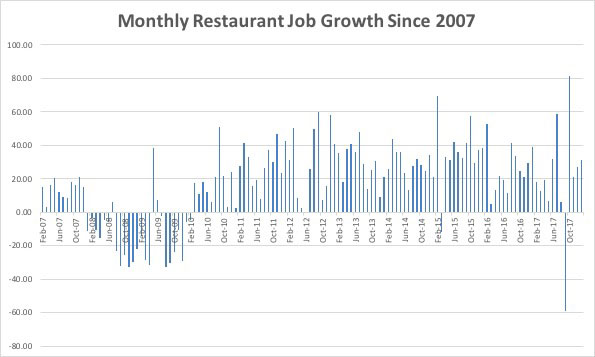 Stocks declined on Friday, in part due to speculation that higher wages could prompt an increase in interest rates. Restaurant stocks were also mostly down in morning trading.

Restaurants have been adding jobs at a higher-than-normal rate for much of the past five years, and in January one out of six jobs the economy created was at a food or drinking place.

And restaurants added jobs at a 0.26% rate in January—twice the rate of the broader economy.

Restaurants have added 250,000 jobs over the past 12 months as the industry has expanded despite questions about overall traffic and sales growth. 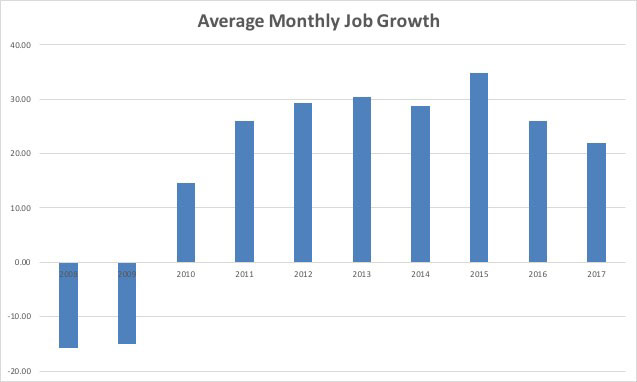 That job growth has helped intensify competition for workers, driving up wages in many markets.

Wages for leisure and hospitality workers grew 3.9% in January. That’s a slight decline from the 4.1% rate in December but remains much higher than wage growth in the broader economy.

The higher wages have generated profit concerns among restaurants amid weak traffic and concerns about the industry’s pricing power. Restaurants have raised prices much higher than have grocery stores in the past two-plus years—menu prices have increased 7.6% from December 2015 through December 2017, while grocery prices over that time have fallen 1.5%.

But if wages grow at a higher rate for the overall economy, that could provide some boost for sales that offset those profit concerns. In addition, the industry is hopeful that tax cuts this year could give consumers more cash that they use to spend eating out.