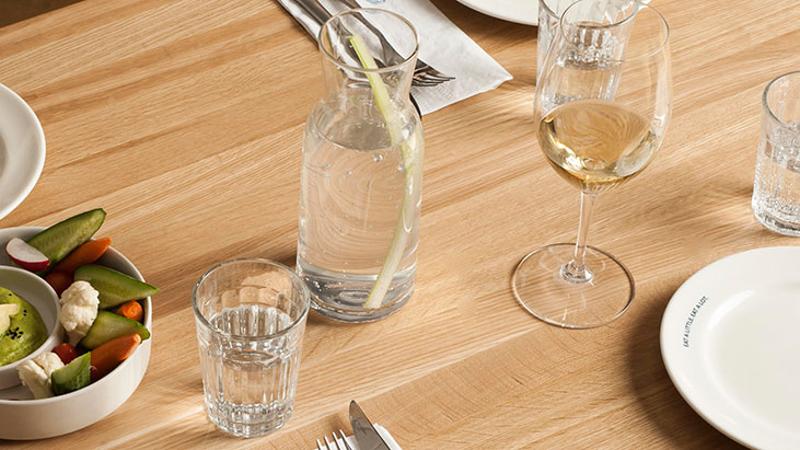 About three in 10 consumers are increasingly drinking water at restaurants instead of other beverages for health reasons, shows Technomic’s Beverage Consumer Trend Report. However, many seem to be choosing tap water over bottled water for cost reasons.

In response, Earls.67—a prototype of Earls Kitchen + Bar in Calgary, Alberta—started testing a new idea last summer: housemade carbonated waters in flavors such as guava and celery, cola, and pineapple star anise. The flavored waters are priced at $2 per glass and do not come with free refills.

It’s obvious from the presentation that this isn’t just tap water. We add a garnish to the flavored waters that make them look like a one-time buy, and we’ve never been questioned by guests about it,” says Bogue. The garnishes match the waters—for instance, the celery iteration features a spiralized celery ribbon—and also prevent staffers from accidentally pouring tap water into the glass, says Bogue.

The problem with spa water

Execs who travel a lot have likely run across spa water: that jug of fruit-infused water in a hotel lobby. Many restaurateurs are intrigued with the offering, but at this point, they are learning that infused water can’t be offered at a cost to guests unless there is added value beyond cut-up fruit.

Bogue says, “I was adamant that I didn’t want to charge for spa water. Our infused-water lineup needed to be more valuable, made with extracts, distillates and good garnishes.”

Beverage Director Mat Snapp, who is considering adding a similar option to his self-serve drinks at Fox Restaurant Concepts’ fast casual Flower Child this summer, agrees. “We have to make sure that the value perception is there. You need to offer some specific benefit or flavor component that someone wants to buy,” he says.

At the original location of Beefsteak, Jose Andres’ fast casual in Washington, D.C., water infused with cucumber and basil sits out for guests to help themselves to—but it’s free. Pat Peterson, Beefsteak’s executive chef, says, “It just doesn’t make sense to charge for it. Guests love it, but they don’t see the value in packing up some veggies and throwing it into a water tower.” This particular water isn’t too costly for the veggie-focused restaurant, as it is able to use its leftover veggie pieces from service in the water.

Still, charging for it has been a challenge for him, too. Peterson has found success at some other Beefsteak family restaurants by positioning an infused water as an agua fresca as opposed to flavored water. It’s a way to enhance the value perception and be able to charge guests, he says. In addition to appealing to health-conscious consumers, he adds, the drinks are a middle-of-the-road option that allow operators to offer a lower price point than craft sodas.

“Look at your entry-level entree price and your workhorse in your beverage program, and try to keep [the signature water option] in the 20%-30% price range of the entree … Anything above is risky,” says Peterson. “There’s a great craft soda out there that costs a lot—$4.50—and when we’re charging $8.50 for a bowl, proportionately that doesn’t make sense.” But the higher the quality of the ingredients used, the higher the cost per ounce, he adds. “It’s a balancing act.”