The newest tenant of the Rosedale Center mall in the Minneapolis suburb of Roseville, Minn., is a 30,000-square-foot laboratory filled with just about every trend and experiment in the restaurant industry.

Revolution Hall has a fast-casual service style. Murals were done by local artists. There are self-order kiosks and the restaurant has its own mobile app. Robotics and other labor-saving devices dot the operation. The restaurant is cashless.

It’s also a food hall, the latest in a generation of multiconcept restaurant spaces catering to consumers looking for different experiences.

That it’s in a mall makes it different. Food halls are supposed to be in urban areas with lots of foot traffic, not suburban, drive-to malls. Yet to the folks behind Revolution Hall believe their more egalitarian concept is what a food hall should be—while being potentially more profitable.

“There’s cheaper rent, a bigger space and parking,” said Matt O’Neill, the vice president of culinary for the concept’s owner, Craveable Hospitality Group, and Revolution’s co-creator. “And we have seating. One problem I see at most food halls is you can’t find a seat and some people are eating over trash cans.

“We have 780 seats. You can grab some food and you’re guaranteed to get a seat.” 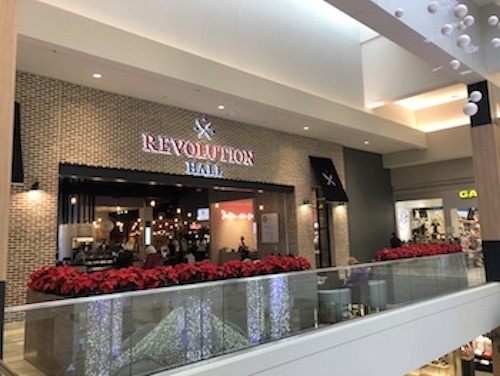 Revolution has two floors with stations that serve coffee, tacos, sandwiches, pizzas, waffle sandwiches, noodles and sushi. It has two bars and expansive seating with frequent power outlets. Outside the sushi kiosk on the second floor is a mural of Paul Bunyan eating noodles with Babe the Blue Ox. Its bakery, Piecaken, has already committed to making and shipping 5,000 of the pie-cake combinations that are its namesake.

The food hall opened two days before Thanksgiving, part of an $80 million remodel at Rosedale, one of the busiest malls in mall-happy Minnesota. The location is one of the center’s anchors, a former Borders that has gone through a succession of tenants since the bookstore chain shut down in 2011, such as a furniture store and its share of pop-up Halloween shops.

The hope clearly is that Revolution can end the location’s revolving door while further upgrading the mall’s food offerings. Rosedale has abandoned its traditional food court as part of a new remodel but instead boasts several different restaurants, including a Panera Bread, a Chipotle Mexican Grill, Big Bowl, Crave, Green Mill and others.

And Craveable hopes that the location will thrive. The mall is visible from a busy nearby freeway that connects Minneapolis with suburbs closer to St. Paul. Many of those drivers get a good view of Revolution Hall.

Craveable is the New York-based company behind concepts such as Caputo Trattoria, Prime Steakhouse and Henry at Life Hotel.

Many of the company’s restaurants are upscale, and O’Neill himself has a fine-dining background—he worked with New York restaurateur Daniel Boulud for a time. Boulud, he noted, is the culinary director and an investor in the robotic restaurant Spyce. “We’re all fine-dining people,” O’Neill said. “We take those techniques and apply that to a fast-casual model.”

Revolution was designed to be more efficient than most restaurants and certainly food halls. Much of the food prep is done from a central kitchen and then shipped out to the kiosks. “We get efficiencies with preparation,” he said. “So one guy is slicing the onions for the burgers and the pizzas.”

Revolution has numerous robotics and other devices to help workers at the kiosks finish the preparation. There are a trio of sushi rolling machines, for instance, as well as a roller for the pizza dough at the Neapolitan pizza shop in the back corner, where the pizza oven has a turntable inside so workers don’t have to constantly turn the pies.

“We think the use of technology is easier for employees, faster for guests and more consistent,” O’Neill said.

He said the robotics and the efficiencies don’t take away from the upscale heart of the operation. O’Neill said this while sitting near the company’s burger kiosk, Saltbrick, which will soon have a box to dry age the beef, and also near the second-floor whiskey bar.

“We’re still cooking from scratch in the back,” he said, adding that a more efficient, fast-casual service model helps given today’s labor environment.

“Training is an issue,” he said. “Turnover is an issue. The world is evolving. If you push back against it, it won’t work out.” 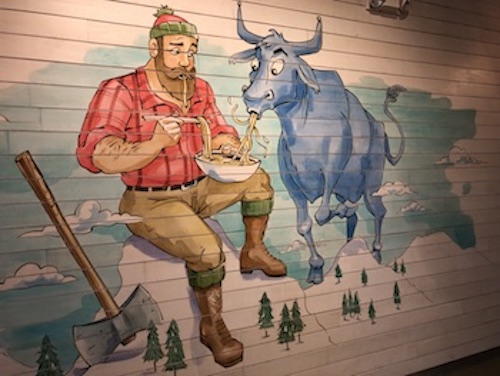 Some of the operation could be too forward, such as the fact that the restaurant is cashless in a mall frequented by younger consumers. “We may be early,” he said, but added that it’s safer for employees and makes it easier for customers.

The self-order kiosks, however, are not—a growing number of restaurants are using them, and O’Neill believes they will help improve service and speed while giving customers the option of ordering from all of the food options. And the restaurant has a dedicated station where such orders can be picked up.

But the biggest risk remains the mall itself.

Growing use of e-commerce has hammered mall traffic in recent years. Malls have therefore turned to restaurants to generate that traffic and fill spaces.

While Rosedale recently debuted a new anchor in the retailer Von Maur, it lost another one with the closure of a Herberger’s, not far away from the Revolution Hall.

Still, O’Neill pointed to a recent, busy Saturday as proof that people still like going to malls. And he believes the concept can benefit from that, while helping the mall get more customers.

“I believe this is definitely the extension of how food outlets within the mall will work,” he said. “We want to prove to them that we’re not a food court. We’re something very different.”