The IHOP family-dining chain is spinning off a fast-casual venture for urban markets called Flip’d by IHOP.

The new concept—roughly half the size of an IHOP—will feature many of its mother brand’s popular menu items, including buttermilk pancakes, fried chicken, egg dishes and burgers. But a number of the items will be tweaked for portability and easier eating on the run, says IHOP President Jay Johns. A Flip’d signature, for instance, will be a pancake-lined bowl that patrons can garnish at a Build Your Own Pancake Bar and carry out with them. Patrons can similarly opt for a bowl of oatmeal and choose their toppings.

Other items customers won’t find in an IHOP include burritos and lunch and dinner bowls, along with grab-and-go baked goods and some ready-to-eat salads for takeout.

The expectation is that most of the food will be eaten off-premise. Seating is minimal, and most of the savings in floorspace come from the elimination of a dining room, Johns says. Research showed that many people in high population areas pick their morning stop because of its coffee and then “tend to settle for the food that’s available there,” he explains. The point of distinction for Flip’d, he continues, is the promise of quality, freshly prepared fare that requires no sacrifice in convenience. 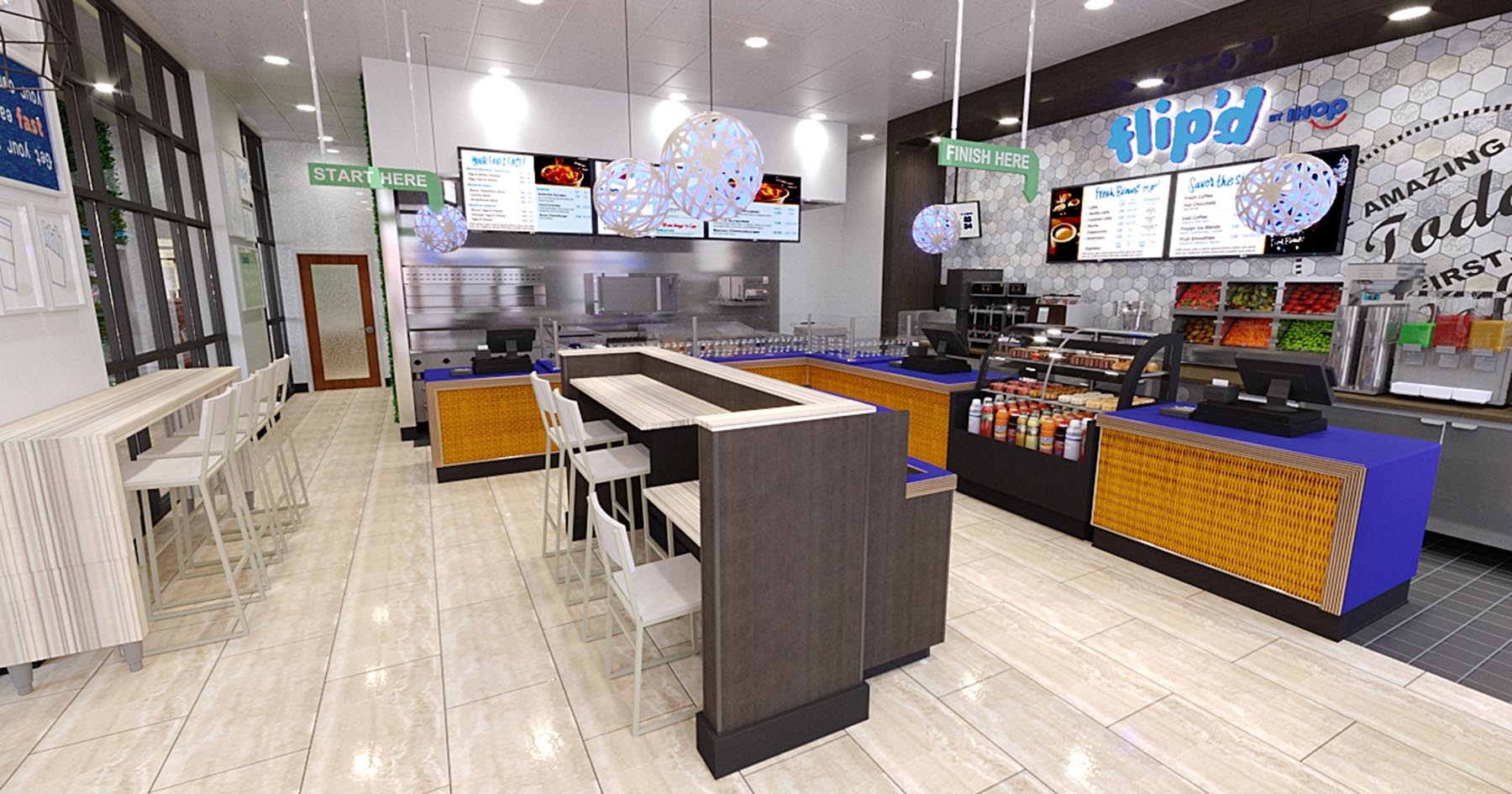 Drop-in patrons will be able to order at kiosks as well as at the counter. Takeout customers can order and pay ahead and pick up their orders from a shelving unit of cubbyholes. Delivery will be offered through IHOP’s third-party partners, and the focus on highly populated urban settings will facilitate “a big play for catering,” Johns says.

Breakfast will be the “hero” at Flip’d, but the concept will also push for significant lunch and dinner business from consumers looking for convenience, he continues. He voices hopes that all of the units will stay open 'round the clock, as many IHOPs do.

Johns stresses that Flip’d is its own concept, and not merely a smaller IHOP. “It was really important to us that we didn’t just shrink an IHOP and that we turn it into something different with a different menu,” he says. “If you shrink a 4,000-square-foot restaurant”—the typical size of an IHOP—“you still have a 4,000-square-foot restaurant, just smaller. We had to signify that this is really different. This isn’t meant for a family going out to breakfast on a Sunday.”

Flip’d will feature a display kitchen. “A lot of people don’t realize that the food in an IHOP is freshly made on-premise,” says Johns, adding that customers will be unlikely to have any false assumptions about food prep at the new venture.

The concept features a second production line where the staff can prepare delivery and catering orders.

Without servers, Flip’d will probably require at least nine to 10 fewer employees than what’s needed for an IHOP. Most units will be around 2,000 square feet, though the format can be adjusted to fit an available space.

“I’d like [sales] to be the same or more than an IHOP’s, but a lot will depend on the location,” says Johns. But the cost will be significantly lower because of the smaller footprint and lower labor needs.

IHOP’s headquarters team will be responsible for the rollout and support of Flip’d, at least initially. The concept will be offered to the pancake chain’s current franchisees, as well as operators of its sister brand, Applebee’s. IHOP is 100% franchised.

“This is IHOP growing our business,” says Johns. “Everything we’ve been doing and everything that’s been done under my leadership has been to bring IHOP to more people. The more locations we have, the more likely we’ll be top-of-mind.”

The first Flip’d, a franchised location, is scheduled to open in Atlanta in April. Other targeted sites include Dallas, New York City, Chicago and Boston.