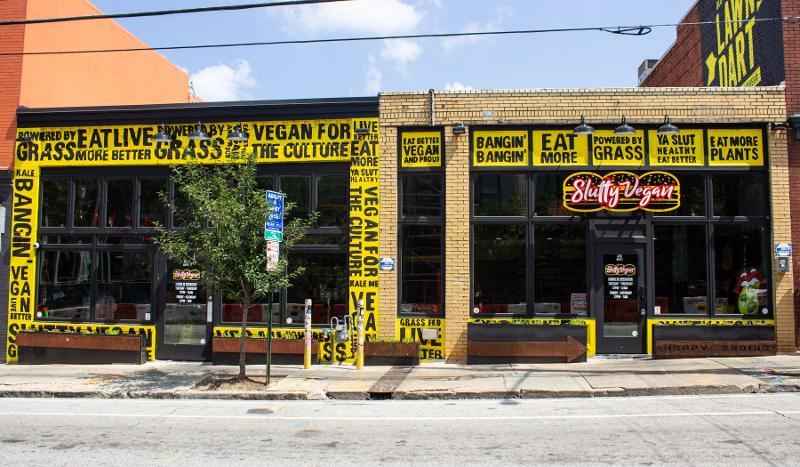 “To have the New Voices Venture Fund and the GOAT of the restaurant industry, Danny Meyer himself, to have them a part of this team is a recipe for success,” Cole said. “I’m excited about the people I’m involved with.”

“I had never seen vegan food presented in such a fun way,” Meyer told Forbes. “Leaders are often defined by the degree to which people want to follow them, and I saw people following the leader.”

During the pandemic, Cole took all of the seating out of the restaurants and turned that real estate into retail areas selling shirts and hats and “anything you can think of,” she said.

“We do extremely well in our retail department, and we don’t even fully advertise it yet,” she said. “People want to wear the brand.”

Cole said about 97% of the customers coming in for vegan burgers like the One Night Stand (a plant-based patty topped with vegan bacon, vegan cheese, caramelized onions, lettuce, tomato and Slut Sauce on a vegan Hawaiian bun) are meat-eaters.

The quick-service brand plans to add a salad and a kids’ meal in the near future, she said.

Dennis launched his New Voices Fund at the end of 2020 to support Black women entrepreneurs in many industries. Meyer started his EHI fund more than four years ago and has since invested in growth chains and tech companies such as Dig, Goldbelly, Salt & Straw, Joe Coffee and Bentobox. In January, Meyer’s group closed on its second fund, which raised $332 million in capital commitments.