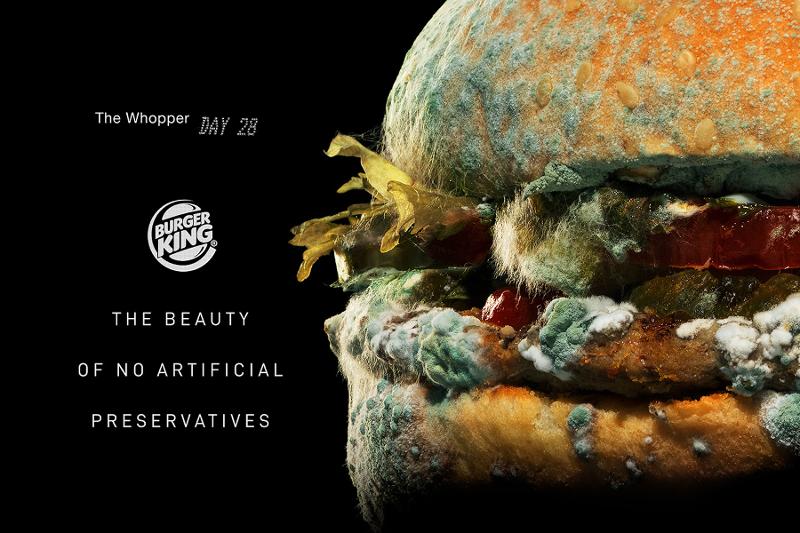 It’s safe to say that Burger King is breaking new ground with its latest ad campaign.

The Miami-based burger chain Wednesday revealed an ad with a decidedly less-than-ideal version of its signature sandwich, the Whopper.

The company said it has a Whopper with no preservatives, colors or flavors from artificial sources in more than 400 locations in the U.S., with plans to add the more natural version of the burger to all locations by the end of the year.

The company has also removed MSG and high-fructose corn syrup from all food items and said that more than 90% of its ingredients in the U.S. are free from artificial colors, flavors and preservatives.

The ad features a photo of a Whopper clearly left in a damp and dark spot for too long. While the photo itself is well done, it is clearly unlike typical food photography. The ad features the tag line “The beauty of no artificial preservatives.”

For Burger King, the campaign and the shift away from artificial preservatives puts the company on the same level as numerous competitors that have removed artificial ingredients from many of their products. The ad, however, brings a Burger King-like marketing move to that shift.

“At Burger King restaurants, we believe that real food tastes better,” Fernando Machado, chief marketing officer for Burger King owner Restaurant Brands International, said in a statement. “That’s why we are working hard to remove preservatives, colors and flavors from artificial sources from the food we serve in all countries around the world.”