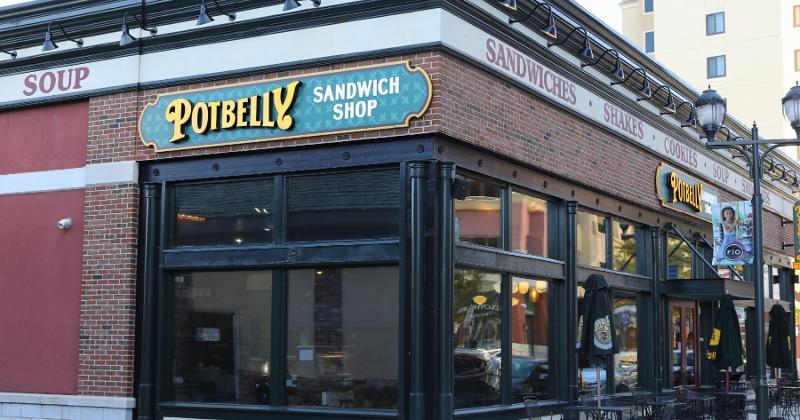 Sales at units in central business districts were up nearly 40% in the third quarter. /Photography courtesy of Shutterstock.

Potbelly Inc. reported a second consecutive quarter of record average unit volumes on Thursday, saying its stores in central business districts and airports are coming back and all units are building strength with catering.

President and CEO Bob Wright said Potbelly’s average unit volume reached $23,383 in the Sept. 25-ended third quarter, an upward trajectory that continued into the fourth quarter with AUVs of $25,244 in October alone.

Wright, whose CEO contract was recently extended through 2025, has set a goal of reaching AUVs of $1.3 million by 2024. Expecting to hit AUVs of between $1.14 million to $1.16 million for the year, the company is well on its way, he said.

For the third quarter, Potbelly’s same-store sales grew 15% and restaurant-level margins expanded to 10.6% from 8.7% a year ago. That improvement was boosted somewhat by a 3.6% increase in menu prices during the quarter that will put pricing up about 9% for the year.

But, despite higher prices, Potbelly is seeing more demand from guests, and is stealing traffic from its peers, said Steve Cirulis, Potbelly’s CFO.

“You’ve got a consumerwho’s facing inflation, and they do their own calculus in terms of what they want to enjoy and what they can afford and where they think they’ll get the most value for their money. And we’re pleased to see they’re choosing us and at a rate that’s increasingly more so than our fast-casual competitors,” Cirulis said during an earnings call with analysts.

Revenues of $117.6 million, a 15.7% increase year-over-year, also set all-time records and the company swung to a profit, with net income of $9 million, or 31 cents per share, compared with a loss of $2.9 million, or a loss of 10 cents per share, a year ago. Adjusting for the benefit of a $10 million federal Paycheck Protection Program loan last year, net income was $0.03 million.

Sales improved nearly 40% at units in central business districts, and more than 23% at airport locations, the company said. Those locations were hit particularly hard by the pandemic and have been slower to recover.

During the quarter, Potbelly promoted a Gyro Sandwich LTO, as well as a S’mores Cookie and a Pumpkin Shake. Targeted promotions through the chain’s 2.3 million-member loyalty program—which added 115,000 new members during the quarter alone—also helped.

Wright said the company has been pleased with the new Potbelly Digital Kitchen program, launched as a test earlier this year, that is being expanded to more stores. The system, which digitizes both makelines, is designed to improve speed, accuracy and throughput, as well as create efficiencies.

Potbelly has kept digital sales steady at about 36% of revenue while growing in-store sales, and Wright said, “We’re still expecting a lot more out of our catering business as it continues to return.”

Not only is office catering coming back with the return of workers to downtowns, Wright said they have also found success marketing Potbelly sandwiches for “social and celebration occasions” across the system.

Potbelly also announced the first two expansion deals since the company launched a renewed franchising push earlier this year. The company signed two franchise development deals that will bring a total of about 25 new locations to Tampa and Orlando in Florida, and Central Illinois over the next seven to eight years.

With about 400 company-owned units and 40 franchised now, Wright has set the goal of growing the chain to 2,000 units by 2024, with 85% of those franchise-owned. Potbelly plans to refranchise 100 units as part of that process.