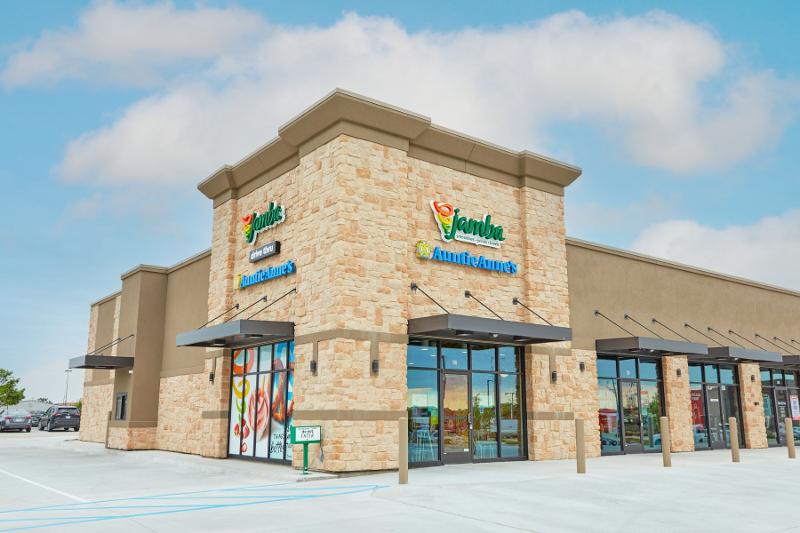 Cinnabon and Auntie Anne’s are looking to move outside the mall. But they don’t plan to do so alone.

The two snack concepts are as much a part of U.S. mall culture as The Gap and teenagers. Yet parent company Focus Brands, the Atlanta-based brand operator, is eager to find more development opportunities outside the confines of fluorescent lights and food courts.

This comes after the company opened its first ever Auntie Anne’s drive-thru, which was cobranded along with Jamba at a location in Wylie, Tex., last May. The company has since signed a deal with an operator who will take the cobrand to the Dallas-Fort Worth market. And other Jamba operators are interested in adding the pretzel concept to their restaurants.

“Cobranding has been around for many years at Focus, but primarily in the captive market/mall space,” Brian Krause, chief development officer with Focus, said in an interview. “Where we’re starting to lean in more, we continue to evolve the cobrand outside of those mall locations. That’s where we’re starting to see more of those open over the past couple of years.”

Focus operates Carvel, Schlotzsky’s, McAlister's Deli and Moe’s in addition to the aforementioned three brands. And the company has not given up its development inside nontraditional locations where Cinnabon and Auntie Anne’s have traditionally been most popular.

Focus has teams dedicated to developing in individual nontraditional-type markets, including malls, universities, travel plazas and airports. “If done the right way with the right development partners, there’s still plenty of room for growth in those areas,” Krause said.

But Cinnabon and Auntie Anne’s have been more fully dependent than other Focus concepts on nontraditional locations and especially malls. Both brands suffered for it in 2020 during the worst of the pandemic.

U.S. system sales at Cinnabon, which operates more than 900 locations in the country, declined 29% in 2020, according to Restaurant Business sister company Technomic. Sales at Auntie Anne’s 1,200 U.S. locations declined 38%. The majority of locations for both brands are located in shopping centers.

Still, it’s difficult for malls to take advantage of current trends like takeout and delivery. And Krause said the chains’ respective customers have been demanding more accessibility for the concepts. “They want to get them when they’re not just shopping in the mall,” Krause said.

The challenge for Focus is that the brands rely heavily on foot traffic, but their unit volumes do not necessarily justify the rents that come with such high traffic sites. That’s where cobranding comes in. By merging two complementary brands, Focus believes they can operate more efficiently to be able to go into such sites.

That makes the 10-unit New York deal so important. The units will be in locations accessible on the street, but which still have “highly captive markets” with a lot of foot traffic that will walk past and presumably smell the cinnamon buns or the pretzels and then walk in and get some. “They’re still high foot traffic markets,” Krause said. “We can go in and test the concept.”

If the test works, it could spur additional development of true outside-the-mall cobranded units with better real estate or drive-thru locations, he said.

“They have both proven they work well together in captive audience venues,” Krause said. “They next step is to bring them out closer to streetside.”

Regardless, the company is being careful about the locations it puts these cobranded units. If they’re going to work outside the mall, they need the right combination of nearby customers. The first drive-thru location, for instance, was across the street from a high school and near other restaurants and a hospital.

“We’re focused on the right demand generators,” Krause said. “We’re going to look at markets where we think the brands are going to be set up for success. We want to be very strategic with where we’re going.”