Domino’s U.S. same-store sales rose 16% last quarter, a strong performance even for a company that in recent years has made double-digit comp growth almost commonplace, and one that bested already-high expectations.

The Ann Arbor, Mich.-based pizza chain was a beneficiary of a pandemic that kept consumers at home. Domino’s is a major delivery player, and the quarantine played into its hands as people made larger pizzas orders more frequently.

The challenge now for the company and its executives is to keep those new customers once things return to normal.

“We’ve seen a significant increase in new customer acquisition over the course of the second quarter,” CEO Ritch Allison said on Domino’s second-quarter earnings call on Thursday. “Our task is to take those new customer opportunities and turn them into second purchases and third and ultimately loyal customers going forward.” 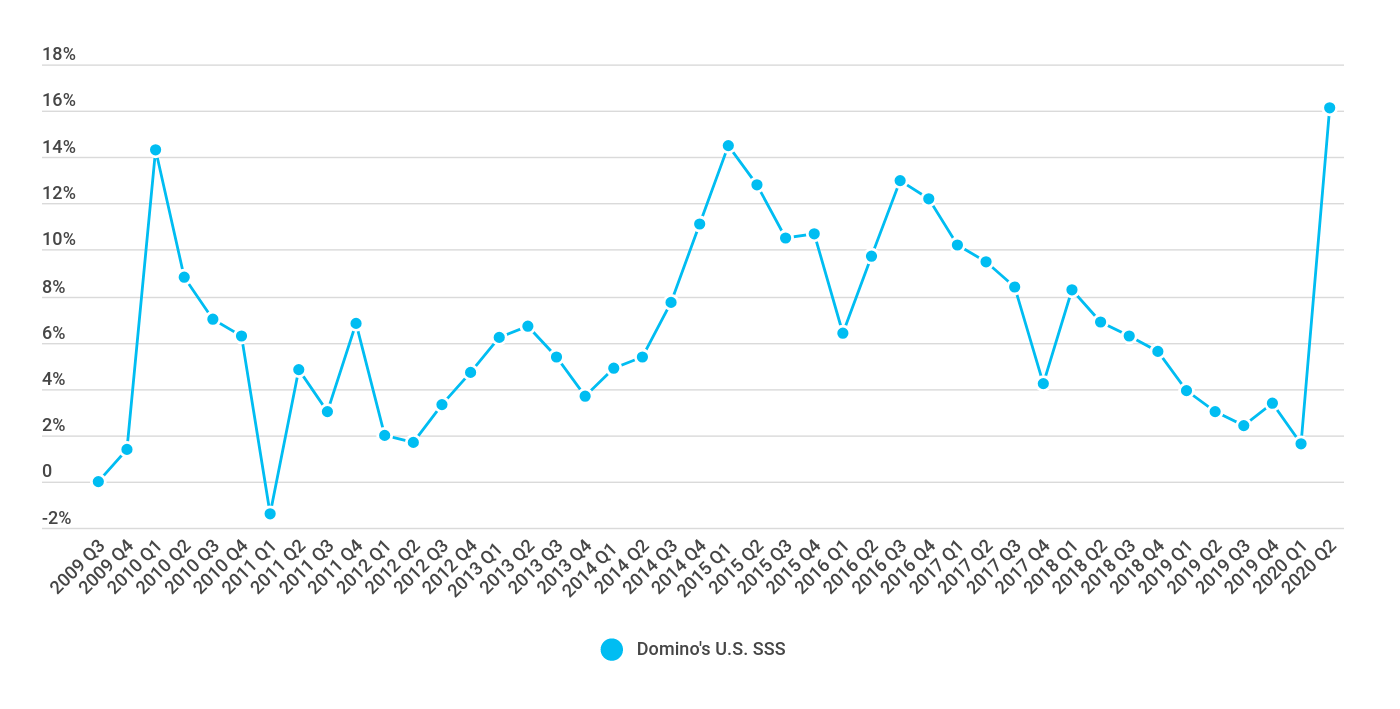 The company saw strong growth in members of its loyalty program, which had its strongest membership growth since the first quarter of 2019, when Domino’s ran a marketing campaign to get customers to sign up.

For Domino’s, loyalty program members order more often. The larger number of members, therefore, gives the company a greater chance to keep more of its additional customers. “We’re working hard to convert these customers into loyal customers so we can continue to earn their business over time,” Allison said.

Most of Domino’s new customers have come through delivery channels, as consumers had food brought to their home more often during the quarantine. Customers have been flocking to service styles they view as safer alternatives, and delivery is a big one.

New customers were less likely to use carryout, Allison said. “There was a lot of caution out there among customers about going into public and to places of business during the quarter,” he said.

To ease consumer concerns, the company has been focused on contactless carryout, what it calls “car-side delivery,” where Domino’s will come out and hand a pizza directly to customers’ vehicles or even place it in their trunks.

“That is really an effort to … create a terrific carryout experience for the customer where they never even have to get out of their car,” Allison said. “Over the long-term, it’s a great way for us to compete against the drive-thru so many other QSRs have.”

Domino’s has also started focusing more on innovation. The chain recently rolled out an improved chicken wing recipe, while adding a 10-piece wing serving to its $7.99 carryout platform.

The new wing recipe is aimed at bolstering sales of a product that has become a lot more popular with consumers of late. “Wings are a rapidly growing category in delivery and carryout,” Allison said. “And as we’re honest with ourselves, our wings needed to improve.”

He also promised additional menu innovation as the company continues to defend its position as the world’s largest pizza player.

Allison said the company doesn’t “launch new products just to create news” but works to generate incremental sales and profitability for franchisees and focuses on permanent menu items with simple operations. He also said that a new item can be an upgrade to its existing menu—something Domino’s has had a history of success with.

“Continued menu innovation doesn’t always have to be something brand new but can be a major renovation of existing products that customers have simply told us need to be better,” Allison said.

He also noted that Domino’s continues to plan on adding new locations in the U.S., even as the pandemic has slowed that recently. The company had been “fortressing” its markets by building more locations closer together to improve delivery times and generate more carryout sales.

“If anything I’m more enthusiastic about fortressing,” he said. “I just see more opportunities to get more stores on the map. When we think about the real estate environment we’re going to have in the near and medium term, there will be a fairly unprecedented opportunity in availability and affordability of real estate out there.”