Like many independent restaurants, the move threatened the company’s survival. So it reopened each of its restaurants in April with makeshift drive-thrus in their parking lots.

Much to the company’s surprise, the idea flourished, with sales frequently reaching precrisis levels.

“It’s all 100% drive-thru,” said Danny Williamson, the company’s president and co-founder. “We’re having a lot of success with it. We’ve hit some pre-coronavirus numbers in the opening days of doing this.”

Perhaps the one service model that has come out of the pandemic looking more important than ever has been the drive-thru.

The window, somewhat controversial for drawing traffic and smog to local neighborhoods, was already quietly gaining popularity as consumers have shifted more business to convenience-oriented visits.

Yet it’s become a major differentiator during the pandemic, so much so that some companies with the windows are returning to pre-coronavirus levels of business.

At a Minneapolis-area Raising Cane’s Chicken Fingers on a recent afternoon, cars could be seen wrapped around the store and into the parking lot of a nearby Target. A suburb away, a Culver’s location has routinely had long lines of customers at its drive-thru. A line of cars spilled out into the road at a Taco John’s on a recent Taco Tuesday.

Twitter users sending in observations said they counted 45 cars at a Raising Cane’s in Houston and 26 cars in a Starbucks drive-thru and saw busy windows at Chick-fil-A and Taco Bell as well.

Executives on fast-food chain earnings calls this week confirmed the success of their drive-thru windows.

Popeyes Louisiana Kitchen, where same-store sales rose 29% last quarter despite a pandemic-induced slowdown at the end of March, had largely returned to that level by late April thanks to its drive-thru.

“In this environment, a drive-thru window is a great option for so many people who want to limit physical contact,” said Jose Cil, CEO of Burger King and Popeyes parent company Restaurant Brands International, on Friday.

Nearly 95% of McDonald’s locations have a drive-thru. Those windows are responsible for two-thirds of sales during a typical year. That number is now 90%. The company has trimmed items from its menu during the pandemic, including All Day Breakfast, in part to speed its service through that window.

“While delivery is up significantly, it’s not the predominant thing that is driving our business,” CEO Chris Kempczinski said this week. “The predominant channel is really the drive-thru.”

For chains that typically don’t have drive-thrus, the window is increasingly becoming an option. Chipotle Mexican Grill is now adding its mobile order-focused “Chipotlane” windows to the bulk of its new units. Outback Steakhouse owner Bloomin’ Brands plans to open its drive-thru, pickup and delivery concept Aussie Grill next week.

For restaurant chains, drive-thrus provide multiple services. They’re considered safer options, and many chains have aggressively marketed their drive-thru business to consumers to remind them of the window. But they also serve as a big signal that the restaurants are open.

That’s important for Starbucks, which closed more than half of its company-owned locations in the U.S.

The drive-thru has helped the company ensure that its coronavirus sales challenges are less severe than they were in China, where in February same-store sales were down as much as 90%.

“In the number of drive-thrus we’ve had open, without even the cafe open, we were delivering roughly 75% of prior-year revenue in those individual stores,” CEO Kevin Johnson said on Starbucks’ fiscal second quarter earnings call.

It’s not just working for big chains, however, as Williamson Bros. Bar-B-Q can attest. 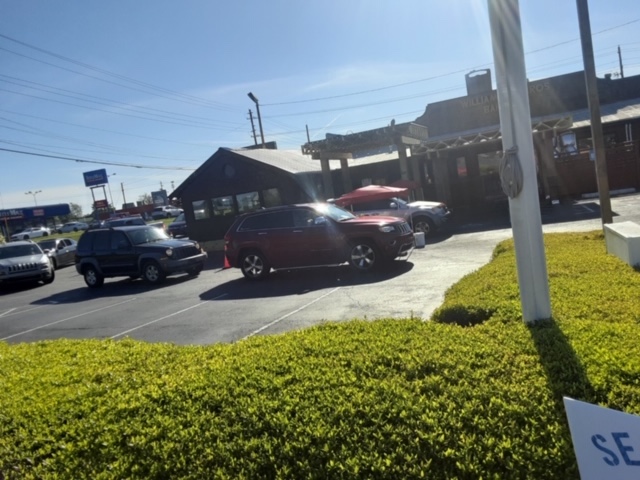 Larry and Danny Williamson, driving a 1988 Chevy Blazer they had won in a raffle, went from town to town in the late 1980s looking for empty restaurants for their barbecue concept. They found one in Marietta, Ga., where they built a barbecue pit and opened Williamson Bros. on March 24, 1990.

Pork, ribs, brisket, chicken and sausage, among other items, are made in bulk at the restaurants’ open pits, and the service is quick. Its three locations typically get a fair bit of takeout, anyway, as customers order barbecue for picnics or other events.

“About 35% of our business is to go in a typical year,” Williamson said. “I don’t want to say we’re experts, but we do a lot of to-gos for picnics, Fourth of July, Labor Day.” 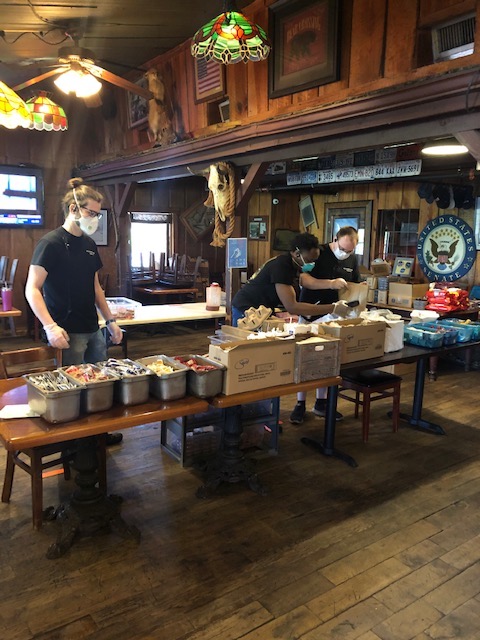 As such, the company had an idea of takeout already. “The only new part, really, was just adding the two-lane drive-thru right up to the door,” Williamson said.

Customers weave their way through the restaurants’ large parking lots, guided by a flag person at the entrance.

Williamson Bros. printed huge versions of its menus, one of which is posted on a giant catering truck at one location, one posted on the building of another, each covered by vinyl.

“We wanted to do something to get things going,” Williamson said.

The reception, he said, was a surprise. “A big, positive surprise,” he said. “We didn’t know what to expect. We didn’t have a drive-thru before. We just got on Facebook, got the word out, and we were rocking.”

Sales are especially strong on warmer, sunny days when people start thinking about barbecue. “We’ll have smoke going, cooking Boston butts and ribs,” he said Friday, anticipating warm, sunny weather for the weekend. “We should do very well this weekend. On these types of days, we could surprise ourselves.”

Georgia, where all three restaurants are located, has enabled eateries to accept dine-in service. So far, Williamson doesn’t plan to take that step until customers feel safe going to restaurants again.

“For the foreseeable future, we’re going to have to include a drive-thru, even if we start limited dine-in seating,” he said. “Maybe through 2021, and who knows after that. Then we might scale down. But until something really changes with the coronavirus, people would rather go to the drive-thru, get it and go home. People feel a lot safer doing this at this point.”