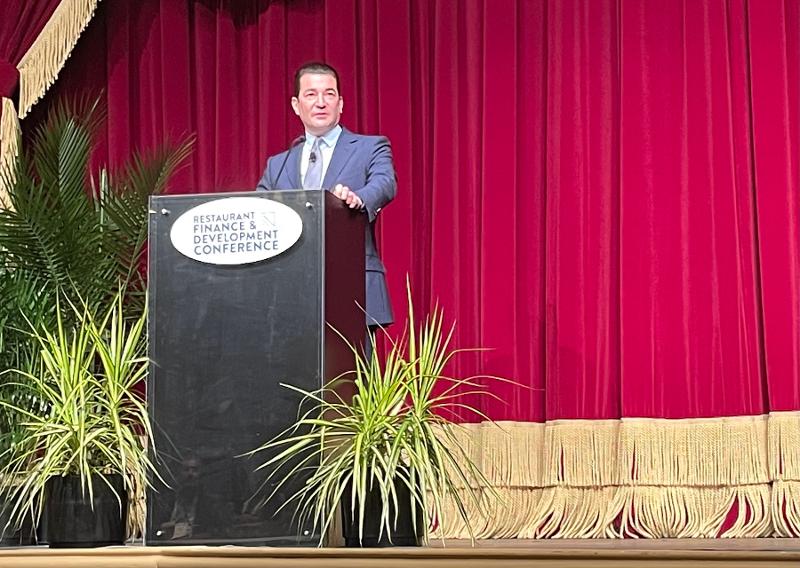 Dr. Scott Gottlieb, the former commissioner of the U.S. Food and Drug Administration, painted an optimistic outlook on the state of the pandemic Monday, suggesting that a high rate of immunity will likely bring down infections after the holidays.

Speaking at the Restaurant Finance & Development Conference, Gottlieb said he believes we’re in “the last major wave” of a pandemic that has upended the economy and the restaurant industry as a whole.

“Barring something very unexpected, which we don’t see happening, we really could be through this,” Gottlieb said. “It’s not something that’s going to dominate our lives.”

New coronavirus infections have been cut in half since the summer surge brought on by the more virulent delta variation of COVID-19, according to data from the U.S. Centers for Disease Control and Prevention.

Cases have plateaued at about 70,000 per day more recently, which Gottlieb attributed to the variant moving into more populated areas.

He does believe that infections could increase come the holidays as people gather together for celebrations, but he believes he will fall thereafter. “It’s going to get a little worse before it gets better,” Gottlieb said.

The impact of the pandemic has serious implications for the restaurant industry, which is why Gottlieb was a featured speaker at the conference. More infections likely keep people from dining inside of restaurants and mandates on masks and vaccines likely have their impact, too. In addition, many believe that an easing of the pandemic will convince people it’s OK to go back to work.

Gottlieb believes many of the mandates in place now, such as masking requirements, could ease next year as cases decline again.

The biggest reason is the rate of immunity among the population, coupled with the quick production of medications to treat the virus. Gottlieb noted that 81% of the adult population has had at least one vaccination shot. About 90% of people who get one shot usually get a second, he said.

The rate won’t get much higher, but the country is well vaccinated. “We don’t get to 90%,” Gottlieb said. “We don’t get that with childhood vaccinations. Still, at those levels, that provides a lot of immunity in the population.”

Many of the remaining population may also have been infected, which also provides some immunity to the coronavirus.

That level of immunity, he said, is also why he disagrees with the Biden Administration’s plan to require large employers to require workers get vaccinated—a requirement set to be in place in early January.

“I have a lot of concerns about this particular mandate,” he said. “First of all, I’m not sure it’s necessary.” He suggested it could get about 4% of the population vaccinated who otherwise wouldn’t get the inoculation.

Gottlieb believes the country should focus on “depth of immunity,” or getting more people booster shots so they do not get reinfected. There is plenty of evidence, he said, to suggest that immunity wanes over time and that almost everybody is eligible for a booster shot.

He also said that mandates should be reserved for healthcare workers or government employees. Gottlieb also suggested that Medicare providers be required to get their patients vaccinated, which would put the onus on the health care system to inoculate older Americans, rather than employers inoculating younger Americans.

The bigger question is whether the coronavirus returns again next fall and becomes endemic, like the flu.

If that happens, that could provoke more responses to limit gatherings. “If COVID becomes a second flu, the combined impact of COVID and the flu is probably too much for us to sustain as a society,” Gottlieb said.