The big buffet chain has been gradually reopening locations across the country with a different service model, typically a cafeteria-style strategy in which employees serve customers items that would have otherwise been in a buffet.

Some locations, however, are shifting to a family-style table-service model.

“We have developed new service models to comply with variations in local and state guidelines that provide our guests an enjoyable Golden Corral experience,” the Raleigh, N.C.-based chain said in a statement emailed to Restaurant Business.

The company said it expects to reopen its 100th location with a modified service model Saturday. 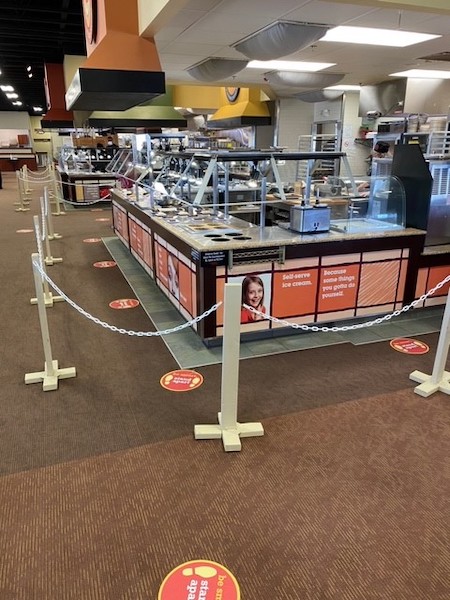 Federal guidelines suggest that self-service options not be reopened, and most states have followed those guidelines.

That means at least a temporary end to self-service beverage stations and salad bars. It has forced fast-food chains such as Burger King and McDonald’s, for instance, to close off self-service drink stations and require staff to serve beverages.

Yet the changes are far more challenging for buffet concepts that were developed with the idea that customers serve themselves from a seemingly endless supply of food options. The changes are forcing some buffet companies to answer some tough questions.

Already, one company has said it would opt not to reopen at all: Garden Fresh Restaurants, owner of salad bar concepts Souplantation and Sweet Tomatoes, filed for Chapter 7 bankruptcy.

Most other buffet chains are at least making a go of it in some format, however. Chains such as Old Country Buffet and HomeTown Buffet have reopened many locations with takeout service. Pizza buffets are giving customers their own serving utensils.

Golden Corral, however, is taking a more aggressive route by reformatting its business for cafeteria-style service.

The 483-unit chain has been the largest buffet concept in the U.S. for years and has been enjoying modest growth even as its competitors have struggled. The chain’s system sales grew by 0.8% last year, according to data from Restaurant Business sister company Technomic. By contrast, its competitors averaged a 3.8% decline.

Even before the pandemic, however, the company had experimented with different models. In one test, the company was trying out different payment and service models in the hopes of remaining relevant to a consumer shying away from traditional buffets.

As the pandemic hit, it shifted to takeout. But in late March, the company opted to close its 35 company-operated locations, furloughing 2,290 workers in the process.

Now the company is gradually reopening its restaurants without that buffet.

In the cafeteria-style model, stanchions are set up around the buffet areas and now-common floor markers tell customers where to stand as they line up for their food. Golden Corral staff then serve customers the food they request, eliminating the need for customers to touch utensils.

In the family-style model, servers bring customers “an endless buffet” of selected items to their tables.

In its statement, the company said it is enforcing “rigorous cleaning standards” for customer touchpoints and is checking customers’ temperatures and adding hand sanitizing stations. Tables are spaced to keep customers apart, and drinks are being delivered to tables.

Golden Corral said its opening would be done on a “location-by-location basis.”

Many locations in states such as North Carolina and Maryland are open on a takeout-only basis. Of those that are open for dine-in business, the vast majority favor cafeteria-style over family-style.

That said, the buffet isn’t completely dead. Fifteen locations have the old service model available now, according to the company’s website. Twelve of them are in Florida.