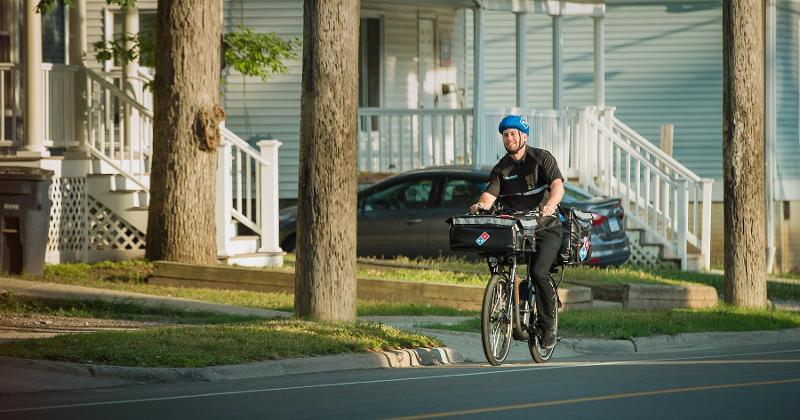 Domino’s Pizza popularized the notion of delivering prepared food directly to consumers’ doors. It was a remarkably successful idea that pulled the entire pizza category with it, and in more recent years, its use of technology vaulted it far past its competitors and gave it a decade of uninterrupted growth.

But now, the Ann Arbor, Mich.-based chain faces pressure from a generation of new entrants that have broadened the types of food consumers can get delivered. The growth of companies such as Uber Eats, DoorDash, Grubhub and Postmates has revealed some cracks in Domino’s delivery fortress.

To push back against those competitors, the company has started marketing “delivery insurance,” guaranteeing that orders will be accurate and on time.

It also started running a 20% off deal after 9 p.m., hoping to get a piece of the late-night market that delivery providers appear to be capturing.

“One of the things that we’ve learned from watching third parties and watching a lot of other delivery activity out there is we think there’s an opportunity at late night that frankly we have not been capturing as effectively as we would like,” CEO Ritch Allison told analysts last month, according to a transcript on financial services site Sentieo.

The company is planning other strategies, too. That includes more technology and operations improvements. And it is focused more on menu development to introduce new products, something it hasn’t focused on as much in recent years.

“We do have some innovation that I’m excited about on the food front,” Allison said. “We haven’t brought any new products forward in a while. Some news there is … due.”

The stakes are high for Domino’s, which has faced investor questions all year about the competitive threat from third-party delivery and its potential impact on the company. Domino’s was built on a foundation of delivery, after all.

The company’s 2.4% same-store sales growth in the third quarter was its lowest in seven years. All of that came from growth in ticket, as operators increased prices and customers ordered more expensive pizzas.

What’s more, the company is getting “terrific growth” in its carryout business, which now represents nearly 45% of Domino’s sales. That suggests its delivery same-store sales have been in decline.

But executives also noted that its overall delivery business nationwide is growing, and that some of the pressure on same-store sales is coming from its “fortressing” strategy of building more units.

“We’ve had some pressure on comps,” Allison said. “But overall, delivery sales are higher than they were a year ago when we look at it in total across our system.”

But Domino’s executives remain skeptical of the overall state of the third-party delivery business, questioning its profitability.

“We don’t have visibility into exactly how long some of these new entrants into the quick-service delivery segment are going to benefit from the financial support of aggregators who are seeking to buy market share,” Allison said. “These players are currently pricing below the cost to serve, offering free delivery or other deep discounts that are currently enabled by investor subsidies.”

The company has long resisted suggestions that it start offering its pizzas on third-party apps, as other pizza chains and companies with self-delivery have done, such as Panera Bread and Bloomin’ Brands-owned Outback Steakhouse.

Domino’s says it can provide delivery at a far better rate than can the delivery providers. There’s also this: It controls the information from those orders.

“We now have more than 23 million customers who are active users in our loyalty program,” Allison said. “And when we look at our broader database of customers, we have 85 million active users of the Domino’s Pizza brand. We have always and we will continue to value this direct relationship we have with these customers.”