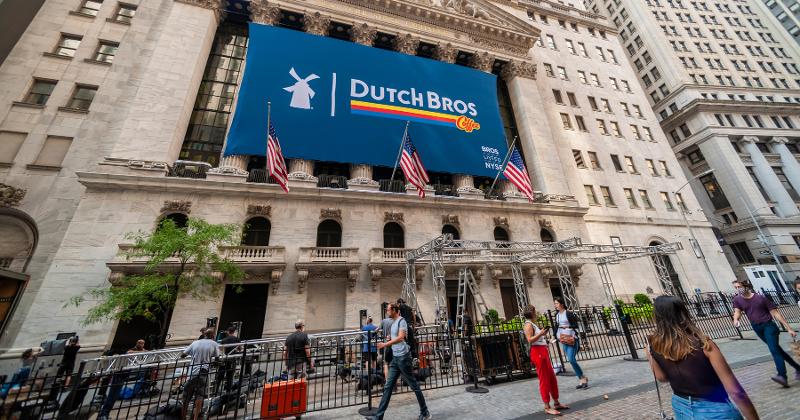 Dutch Bros Coffee, the newly public chain of more than 500 drive-thru coffee shops, said this week that its same-store sales rose more than 10% in the fourth quarter, and 15.3% on a two-year basis.

It also managed to avoid one of the industry’s biggest problems—namely, it was able to keep its stores open.

Company executives said they didn’t experience some of the problems of closed shops or reduced operating hours because of a lack of workers.

They believe this is indicative of the chain’s culture. “There’s great chemistry in the stands,” CEO Joth Ricci said in an interview. “It’s a great place to work. People enjoy it. It’s a different work environment than you might et at other drive-thru locations.”

“I don’t think there’s anything secret to it,” he added.

Labor challenges have been a major problem in the industry in the past several months as strong sales have combined with a smaller workforce to drive up costs for workers and leave many restaurants with shorter hours or reduced services. More recently, the surging omicron variant has exacerbated some of these problems as sick workers left stores without enough employees.

Dutch Bros locations, with just a drive-thru, require a smaller number of employees. In addition, he said, some of the work is outside, which eases some concerns about employees being indoors all the time, which may keep people on site.

But the company has prided itself on a culture of promoting employees from within, then tapping those employees to become store operators as it expands—that way, the culture can remain consistent from one location to the next. That model has helped the chain attract and retain workers.

Dutch Bros added 98 new shops last year, 82 of which were company operated. And the company entered new markets like Texas, Oklahoma and Kansas.

Ricci said at the ICR Conference this week that the company uses its labor in a way that enables managers to tap employees from one store when another one is short staffed. That has helped keep these restaurants open.

Meanwhile, the Grants Pass, Ore.-based chain has seen continued strength from its Dutch Rewards loyalty program. The program was introduced last year and replaced a punch card and quickly became one of the most popular apps from a restaurant chain.

The app already has 3.2 million members. “We have 538 locations,” Ricci said. “Do the math, that’s twice the number of users per store” as the larger players.

Just as notable: 60% of the funds spend at Dutch Bros locations came from loyalty customers, on par or better than some of the most popular loyalty programs in the industry.

The level bested the company’s expectations by a long shot. “We’re probably about one and a half times where we thought we’d land at the end of 2021,” CFO Charles Jemley said at ICR. He noted that getting that up to 70% to 75% is “probably a realistic goal.”