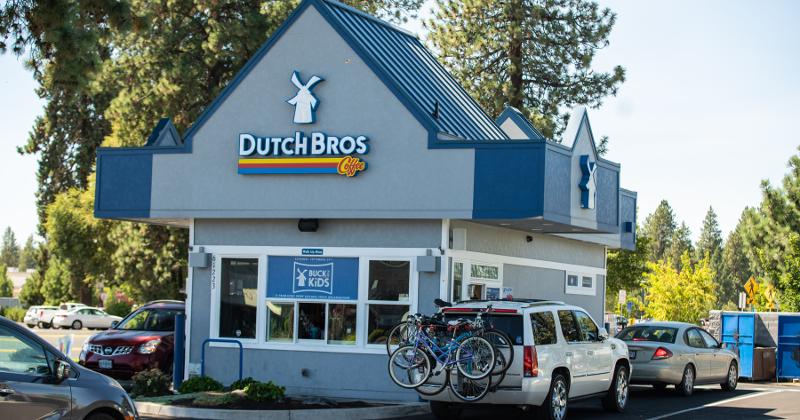 Foot traffic to chains like Dutch Bros fell in June. Inflation may be the reason./Photograph: Shutterstock

Consumers paying higher prices for things like gas and food may be cutting out some of their visits to coffee shops.

That, at least, is according to Placer.ai, a data firm that analyzes foot traffic to restaurants, retailers and other businesses. It noted in a report last week that nationwide foot traffic to coffee chains slowed in June, likely due to higher inflation.

Foot traffic to coffee concepts was down 5.5% in June compared with a January 2020 baseline. By comparison, foot traffic was down 2.5% at quick-service restaurants when compared to that pre-pandemic month.

Placer.ai noted that foot traffic to Starbucks and Dunkin’, the country’s two biggest coffee chains, saw their monthly visits drop in June after remaining consistent throughout much of the year. The firm said that Starbucks’ traffic in June was down 6.6% when compared with 2019. Dunkin’, by contrast, was flat, but slower than it had been through much of the year.

The study also suggests a slowdown in traffic at Dutch Bros, the Oregon-based drive-thru coffee chain. Overall visits to that chain in June were up 178% compared with 2019 levels in June, which is due to a combination of strong unit growth and overall same-store traffic growth during the pandemic. Dutch Bros has been one of the fastest growing chains in the U.S. in recent years and added nearly 100 locations last year alone.

Yet “visits per venue” in the month declined 0.4% in June after increasing 5.9% and 6.4% in April and May, respectively.

The data appears to back up some concerns Dutch Bros executives expressed in May when arguing against overly aggressive price increases. That decision hurt the company’s profits and sent the company’s stock price stumbling. But CEO Joth Ricci said that higher gas prices kept its customers—many of whom are younger and have lower incomes—from going in as often.

“Without claiming to be a macroeconomist, I will tell you that in mid-March, when gas prices jumped the way they did, we saw an immediate flip on our daily sales,” he said. “It was almost to the day.”

Consumer prices rose 9.1% last month, according to federal data released last week. That was the highest rate in 40 years and was driven largely by soaring gas prices. While there is some evidence some of these prices are easing—gas prices have been down for most of the past month—it has also sent consumer confidence plunging.

Coffee chains quickly regained their traffic coming out of the pandemic as consumers used more drive-thrus and visited at different times of day while working at home. But higher gas prices might be making them more reluctant to make some of those extra trips.