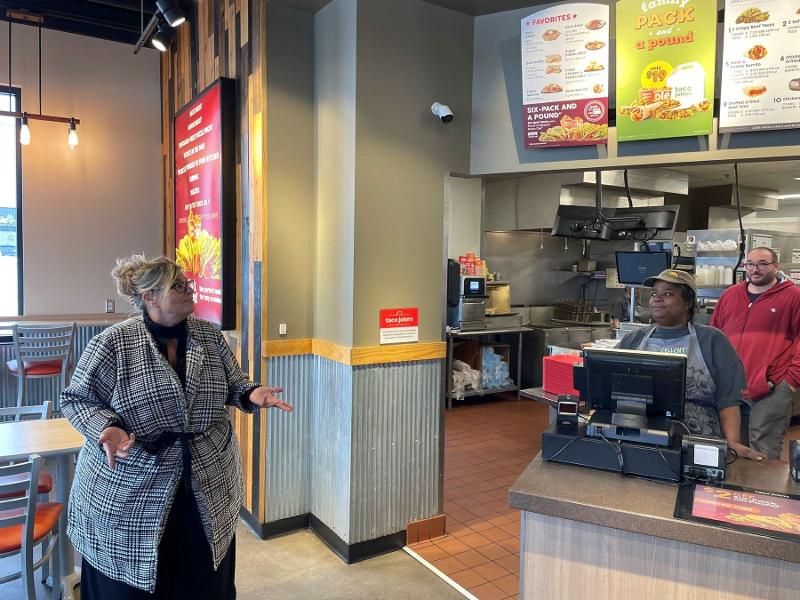 Tamra Kennedy shows off one of her seven Taco John's locations in the Minneapolis-St. Paul area. / Photo courtesy of the International Franchise Association.

Tamra Kennedy got a job at Taco John’s and worked for a franchisee in Minnesota for more than 15 years. When her store became available, she bought it. Today, Kennedy owns seven locations of the Mexican fast-food chain in the Twin Cities.

“Mine is a story you don’t hear about as much in franchising, but it’s out there,” she said during a roundtable in Minneapolis sponsored by the International Franchise Association. “This is a path to small business ownership.”

It’s a story that the association, or IFA, is eager to tell more often, and thus the roundtable, part of the trade group’s “Open for Opportunity” effort, featuring a series of visits to cities across the country. The goal: Give locals a better idea of the opportunities the franchising business model presents.

The real goal is to go on offense. The IFA has spent much of its time in recent years pushing back against regulatory proposals, such as the effort to label franchises “joint employers” of their franchisees’ workers and, more recently, the Fast Act in California that creates a council overseeing regulations involving fast-food chain restaurants.

“It’s about telling the story of the franchising business model, and pairing it with data,” IFA CEO Matt Haller said. At least one reason for the association’s visit to Minnesota: Concerns that Minneapolis could be among the first to follow California’s lead and adopt a version of the Fast Act. That was not mentioned during the roundtable and to Haller’s left was Jacob Frey, the city’s mayor.

Still, the association believes that at least part of the problem with the regulatory environment is a fundamental misunderstanding of the franchise model. In a franchise, a brand like McDonald’s or Anytime Fitness sells the right to operate a brand to investors that pay for the cost to open and operate a business. Operators then pay a percentage of revenues to the franchisor as a royalty.

But the general assumption is that those brands have more control over the stores than they do—and that local stores for such brands are often small-scale businesses.

Critics have argued that the model has perpetuated low pay and poor treatment of employees, particularly at fast-food restaurants. And some brands’ discount strategies or requirements for remodels have sometimes provided a strong incentive for operators to keep their costs low, meaning they keep wage rates low.

The IFA has countered that some of the regulatory efforts go too far and could damage a business model that creates substantial wealth in local communities.

The group believes that it’s preventing franchisors from taking steps to support franchisees. During the roundtable, nearly every franchisee in attendance—including Wendy’s, McDonald’s, Chick-fil-A and Taco John’s, among others—complained about a lack of workers.

And franchisees have constantly requested assistance or ideas on recruiting and retaining workers at Dairy Queen, O’Callaghan said. “It’s something the franchisee is really screaming for,” she said. “They want help. But franchisors are maybe more hesitant than optimal because of the current legislative and legal perspective.”

The IFA also argues that franchisees pay better wages, benefits and training than non-franchised businesses. Workers at franchise firms get 2.2% to 3.4% more per hour, according to a study for the trade group by Oxford Economics. That study also found franchise workers were more likely to reach manager status. Two-thirds of franchisee workers have access to health insurance, compared with 51% for a typical small business. More than three-quarters get paid sick leave, compared with 64% for other small businesses.

When the business model works to its fullest, it can work well for the franchisor while creating wealth for numerous local operators. Many operators are small-scale businesses. One-third of franchisees in a survey for the IFA said they would not own a business if it wasn’t for a franchise. And it’s a more diverse group of owners—26% of franchisees are people of color, compared with 17% of non-franchisees, according to the study.

Local operators can build a connection with their communities, sponsoring events and donating funds to charity. “Franchising as a model is in position to engage in a community that a lot of large organizations just aren’t,” O’Callaghan said.

To be sure, when franchising does not work, it can be disastrous for the franchisee and the workers by extension. Franchisees of the sandwich brand Quiznos closed 95% of the brand’s locations over more than a decade. Subway’s struggles led to more than 6,000 store closures over the past six years, perhaps more closures than any other brand in history. The burger concept Burgerim between 2017 and 2019 convinced 1,500 investors to pay at least $10,000 before the owner closed shop and abandoned the brand, which proved nearly unworkable.

Operating a franchise is only slightly less risky than operating an independent business and any advantage largely disappears after the first year.

That said, stronger franchises have backed their franchisees and kept them afloat during tough times, such as the early days of the pandemic when dine-in shutdowns threatened the health of many businesses.

And many franchisees work actively to encourage their workers to work their way into ownership. Spin the Planet, a 50-unit Jimmy John’s franchisee, shares 25% of its profits with store general managers. But, when they hold meetings with the GMs, the company will also remind them of the times the company helped provide funding so managers in the Boston area and Duluth, Minn., buy their stores when Spin the Planet decided to sell them.

“It helps us tell the story,” Dustin Wetzel, the company’s president, said in an interview. He operates the company along with CEO Dan Vansteenburg.

It certainly helps with recruiting, as many of the company’s general managers have been with the company for more than a decade. That’s never a bad thing, but especially now, when labor remains difficult to find.

UPDATE: This story has been updated to remove an incorrect reference on the percentage of small-scale franchisees.