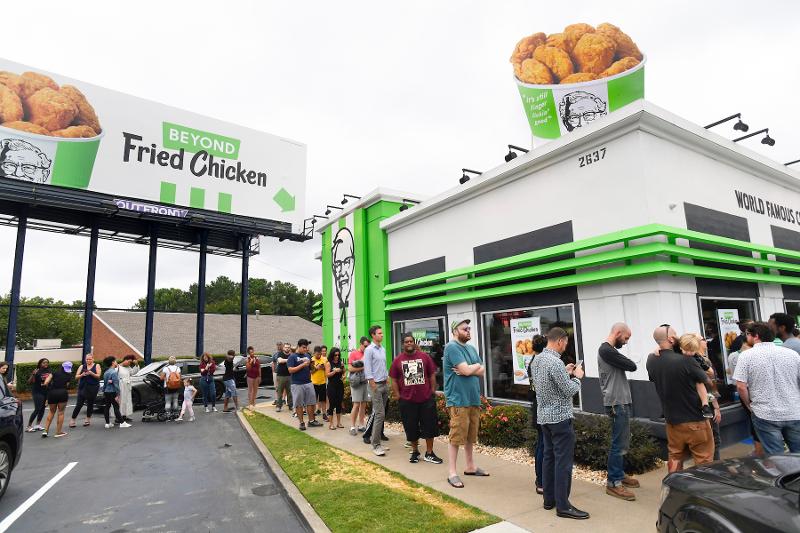 KFC’s test of plant-based chicken was at just a single restaurant in August, and it only lasted about five hours, but the impact for the company was far bigger.

The U.S. fried chicken chain generated 2 billion media impressions with that single-store test, which generated long lines of customers interested in being one of the first to try Beyond Fried Chicken.

Unmentioned, however, was competition from other chains. Rival Popeyes Louisiana Kitchen generated 10% same-store sales growth during the same period. At least some of that came from the Louisville, Ky.-based KFC.

That challenge is expected to reappear in the near future as Popeyes prepares for the sandwich’s relaunch on Sunday.

Still, company executives said they are “bullish on the future” of the company’s U.S. business, citing the chain’s technology initiatives as well as the Mac & Cheese Bowls the chain introduced toward the end of the quarter.

Still, the chain’s marketing win from its plant-based chicken test could set it up for a broader introduction of such products.

The company served chicken nuggets and boneless wings made with faux chicken from Beyond Meat. It was the first major chain to test a chicken analogue amid the current plant-based meat craze.

Gibbs said the company is “intrigued” by the idea and noted that Pizza Hut has conducted its own single-store test of a plant-based product, in Arizona.

“We’re all intrigued by the plant-based alternatives,” Gibbs said. “The success we had with the Beyond test is obviously a good sign.”

CORRECTION: An earlier version of this story included incorrect information on the media impressions KFC generated from the test. It was 2 billion impressions, rather than $2 billion worth of media.