Steve Easterbrook, CEO of McDonald’s, has long said that the fast-food business in the U.S. is a “market-share fight,” a battle over a business that is simply not growing all that much.

His company, perhaps more than any other, has taken out every conceivable weapon in its arsenal to wage that battle—the latest being a planned $300 million purchase of Israeli tech company Dynamic Yield.

The deal, which has yet to be completed, will take McDonald’s drive-thrus into the future, giving the company’s menu boards the same customization properties you find at online retail companies like Amazon. It will highlight menu items based on time of day or the season and will suggest additional items based on a customer’s order. 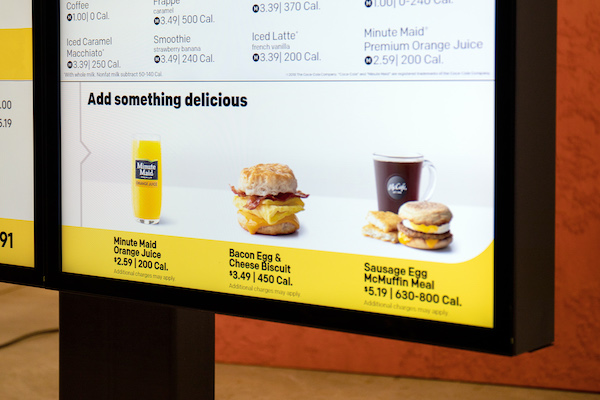 McDonald's plans to give its drive-thru menu boards the ability to suggest items based on time of day, weather or other factors. They will also suggest items to an existing order. /Photograph courtesy of McDonald's Corp.

It’s the type of deal that only a handful of big restaurant companies can afford to make. Essentially, McDonald’s saw an opportunity to upgrade the menu boards in its drive-thrus, where it gets 70% of its business, and simply bought the company that makes the product. It was the company's first acquisition since it bought Boston Market in 2000.

In an email to franchisees obtained by Restaurant Business, McDonald’s USA President Chris Kempczinski said that the technology would enable the company and its franchisees to increase average check, cash flow and speed of service.

The technology will display fewer complex sandwiches during busy periods to improve speed of service, he wrote, and will be added through a software update that won’t require any restaurant downtime.

Operators will pay for the service, but at discounted rates, he said. “We will be one of the first brick-and-mortar retailers to bring decision-logic capabilities to point-of-sale,” Kempczinski wrote.

The fast-food business overall is not growing. QSR chains in the Technomic Top 500 Chain Restaurant Advance Report added just more than 400 locations last year, which was barely a blip for the 170,000-unit business.

In addition, casual-dining and fast-casual chains are finding ways to reduce the convenience edge fast-food concepts have enjoyed for decades—thanks to the advent of delivery, in particular, as well as online and mobile ordering. Some executives liken the current technology race to the addition of drive-thrus at quick-service restaurants in the 1970s.

The largest quick-service chains see these changes and are investing heavily to take advantage.

The company invested $200 million in Grubhub, giving it favorable delivery deals for its KFC and Taco Bell chains in the process.

It later acquired the online ordering service QuikOrder to improve those capabilities at its Pizza Hut chain.

“Technology is playing a bigger and bigger role in the restaurant industry,” Yum President David Gibbs told me earlier this year. “We can scale across industries and brands. Our scale has always been a competitive advantage. It should be a bigger advantage today.”

Starbucks has made a habit of buying small chains to add capabilities to its restaurants—Teavana, for instance, as well as La Boulange bakery.

McDonald’s has been particularly aggressive more recently in using its size and scale to its advantage.

Its most notable investment is ongoing—a $6 billion investment between the company and its franchisees to remodel all of its restaurants by the end of 2020. While franchisees have pushed back on some of the remodel’s requirements, and the company has extended that deadline by two years, it still represents a shockingly fast overhaul of the country’s largest restaurant chain.

Now the company is using its resources to upgrade the drive-thru. McDonald’s wants to improve speed and service in that area, and this could be a key step—all of its U.S. drive-thrus will get the technology, after which McDonald’s will begin adding it internationally.

It’s the type of technology that will give the Chicago-based burger giant a major advantage over its smaller rivals in the coming years.

That could put pressure on those other companies to find ways to keep pace. In that sense, the deal could already be a major win for McDonald’s.