McDonald’s is coming off the best year it’s had since 2011, especially in its ever-important U.S. market.

Same-store sales increased 4.5% in the U.S. in the fourth quarter, and its transactions grew 1% for the full year, the first time that’s happened since 2012.

To get to that point, the company reorganized its management, focused more on value, added all-day breakfast, improved the quality of many of its offerings and added services such as delivery. But the company has also quietly done something else: closed locations.

Since the end of 2014, McDonald’s has closed more than 300 locations in the U.S.—making the ubiquitous chain 2% smaller by unit count.

It ended the year with the fewest locations it’s had since the end of 2010.

One of the better ways to improve a chain’s overall performance is to close underperforming units and stop development. If existing locations are struggling to lure more customers, cut the supply of locations until demand picks up again—or certainly stop increasing supply. That can give a restaurant company an opportunity to concentrate its investments on unit economics.

McDonald’s long ago slowed its unit growth to focus more on generating more sales within its existing restaurants. As a result, it boasts average unit volumes of about $2.5 million—volumes that would be fantastic at any quick-service chain, let alone one with the scope of McDonald’s.

But while it has grown slowly, it has always grown. Between 2004 and 2014, its average annual growth rate was about 0.5%—averaging an additional 67 locations a year. The company added locations even during the recession when many other companies pulled back.

Yet, as its same-store sales began struggling and those challenges became more acute and difficult to manage, the company began culling stores.

Its unit count reduction in 2015 marked the first time in McDonald’s effective history that it shrunk unit count in the U.S.

And McDonald’s rate of decline accelerated last year to 0.84%, a decline of 119 locations. 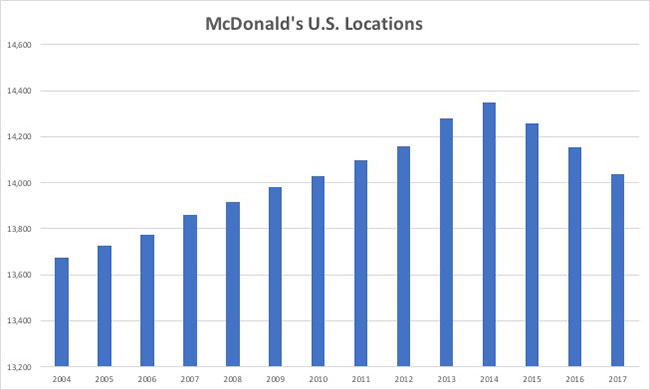 It’s important to note that some units close and others open every year, and all chains will have movement at the margins. Some closures are temporary as a location gets remodeled, for instance.

Then there is this: One of the reasons McDonald’s closed locations, and didn’t open more, was to conserve cash. The company at the beginning of 2015 was facing threats from activist investors and immense pressure to turn around its performance. That led to reduced capital spending and a more inward focus.

The question now is whether McDonald’s will reverse its decline and start adding units now that its sales are back up and that pressure is off. McDonald’s stock has nearly doubled since the beginning of 2015.

On the company’s earnings call earlier this week, CFO Kevin Ozan said that McDonald’s would add 1,000 locations this year. Operators will build 750 locations. But the company would build 250 locations.

It’s uncertain how many of these locations would be in the U.S. But company executives sure sounded like they were intent on growing again.

“Our results demonstrate we completed the transition from turnaround to growth,” CEO Steve Easterbrook said on the call.