For all of the big burger giant’s challenges—complaints from its franchisees, encroaching competition and persistent declines in customer count—it is succeeding where it counts: sales growth.

Since the first quarter of 2017, it has reported average same-store sales growth of 3.2%. That is 310 basis points higher than the average of the other six publicly traded, limited-service burger chains, according to a Restaurant Business analysis.

That outperformance continued in the first quarter of the year, when McDonald’s same-store sales rose 4.5%.

That means that a typical McDonald’s restaurant is on pace to add $123,000 in additional revenue this year.

By contrast, Burger King’s 0.4% same-store sales growth means it is on pace to average $5,000 per location, while a typical Wendy’s is on pace to add $21,000 in revenue with its 1.3% first-quarter growth, based on the chains’ respective unit volumes. 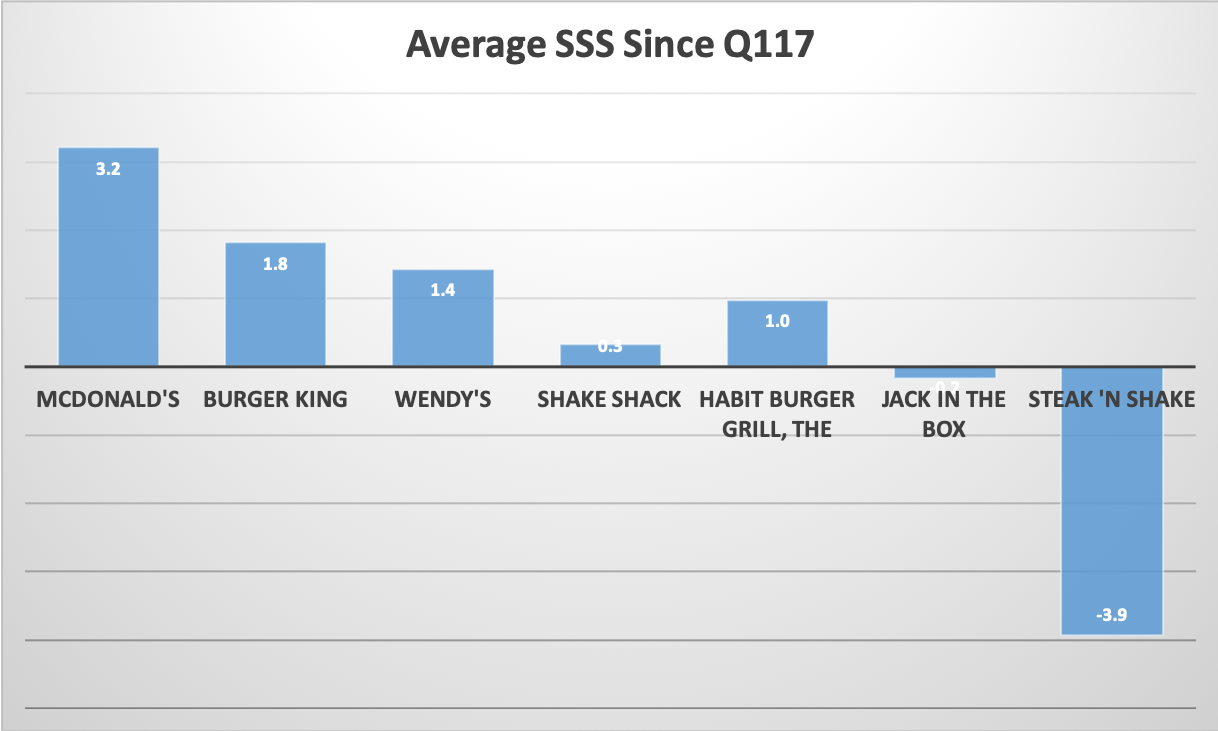 McDonald’s has arguably been the most aggressive and active of any large, publicly traded restaurant chains. It is remodeling almost all of its locations, adding kiosks in the process. It quickly added delivery at more than half of its restaurants. It started selling fresh beef Quarter Pounders and started serving breakfast all day.

For the most part, these efforts tend to generate sales growth. New kiosks, for instance, encourage customers to make larger orders because they spend more time picking out items on touchscreens. The same is true for mobile orders.

Delivery generates a higher average check because customers typically bundle their orders with friends late at night or at work during lunch.

Some of the chain’s other efforts, from Donut Sticks to more expensive breakfast offerings and even a reconfigured dollar menu, led to higher average checks. Franchisees, hit by higher labor costs, continue to raise prices as well.

All of that is translating into higher same-store sales that is besting its primary rivals and adding to its already strong unit volumes.

Still, as Hedgeye Risk Management analyst Howard Penney pointed out rather vociferously on Twitter, the company has been getting these sales through higher average check and not traffic growth, which has been down for five straight quarters.

In the first three months of the year, that average check is up an average of 6.5%, with 2% price and the rest coming in the form of larger orders and costlier items.

As we said last week, McDonald’s may well be pricing itself out of some traffic growth, which it needs to support nearly 14,000 locations and those massive unit volumes. The company now hopes that speed and reduced complexity will help improve traffic.

Still, it seems as if the Chicago-based company is winning the fast-food burger wars. At least for now.