Quick-service chains’ search for sales has taken them to an unlikely place: plants.

Specifically, fast-food chains such as White Castle, Del Taco, Taco Bell, Burger King, and Carl’s Jr. have all pushed meat-free menu items in recent months, hoping that going plant-based will help them lure customers at a time when growth is hard to come by.

But to those behind the menu moves, the strategy isn’t aimed at just vegetarians, but also at meat-eaters who want to eat healthier.

“Greater than 90% of our customers are self-avowed carnivores who want to eat meat, just not every meal,” David Lee, CFO of Redwood City, Calif.-based Impossible Foods.

Restaurant chains have for years offered vegetarian-friendly items, largely to eliminate the apparent “veto vote” from any prospective vegetarian in a dining group.

What’s notable about the recent trend, however, is the chains that are doing it: White Castle, Burger King and Carl’s Jr. are not exactly known for being at the forefront of the health movement.

Carl’s, for instance, has long been known for its marketing aimed at “young, hungry guys,” with ads featuring models eating large burgers.

The company introduced its Beyond Famous Star burger earlier this year, using the plant-based Beyond Meat product, at its 1,100 locations largely because there are a lot of consumers who are cutting back on meat but not giving it up entirely.

“Nearly one-third of the consumer identifies as either flexitarian or say they limit or avoid animal proteins,” said Patty Trevino, senior vice president of brand marketing for Carl’s. 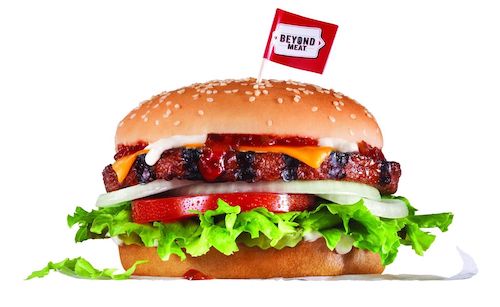 Carl's Jr. says its Beyond Famous Star burger has worked in places such as California, but also in beef-loving Oklahoma./Photograph courtesy of Carl's Jr.

Surveys tend to disagree on whether a growing number of consumers identify as vegetarians. A Gallup poll last year said that 8% of Americans identify either as vegetarian or vegan, the same percentage as in 2012.

“Meat eaters are super interested in the delicious, craveable product they had from a cow, but they’re looking for ways to feel better about their health and the health of the planet,” Lee said.

Restaurant chains, of course, are looking for more ways to drum up sales.

The industry has run into some challenges in recent years, as organic demand for restaurants has appeared to have waned. Industry same-store traffic has been flat or down for the past three-plus years.

Taco Bell has been among the best-performing quick-service chains in recent years, and among all chains in the fourth quarter last year, only Chipotle Mexican Grill bested its 6% increase.

And the chain has intensified its aggressiveness this year, vowing in January to test a vegetarian menu. 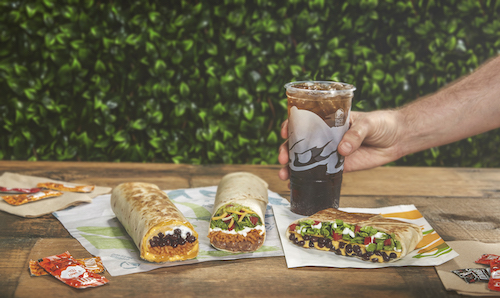 Taco Bell is testing its vegetarian menu in Dallas./Photograph courtesy of Taco Bell.

This week, Taco Bell fulfilled that promise, introducing a menu in the Dallas market that was certified by the American Vegetarian Association. It features vegetarian versions of the chain’s Crunchwrap and Quesarito products, in addition to its 7-Layer Burrito.

The move is a natural one for the 7,000-unit chain, where about 9% of the products ordered are vegetarian. Taco Bell sells some 350 million vegetarian items every year.

Another quick-service Mexican chain, Del Taco, plans to go national with its Beyond Taco and Beyond Avocado Taco, using the plant-based Beyond Meat product.

John Cappasola, CEO of the 580-unit chain, said that “growing demand for vegan and vegetarian options” led to the company’s decision to offer the items. “The response on social media and the results have been impressive,” he said, noting that the products are increasing average check and traffic and bringing lapsed users back into the company’s restaurants.

Carl’s introduced its Beyond Famous Star burger to increase visits to its restaurants. “We are seeing strong response across markets, including California, where we expected this type of menu item to drive, but also in places like Oklahoma, a traditionally beef-driven market,” Trevino said.

She added that based on social media, “We’re bringing in new fans who have not engaged with Carl’s Jr. in years.”

Then there is the surging popularity of the Impossible Burger. In less than three years, the burger has been introduced in 5,000 locations around the U.S., including concepts varying from White Castle to the David Chang-owned Manhattan restaurant Momofuku Nishi.

It has become so popular that Lee frets about the company’s ability to keep pace. “We’re trying to serve every customer who wants us,” he said. “Demand has grown so fast, we’re just sprinting to meet it.”

White Castle said that sales of the Impossible Slider were 30% higher than initial expectations after the burger was introduced a year ago. 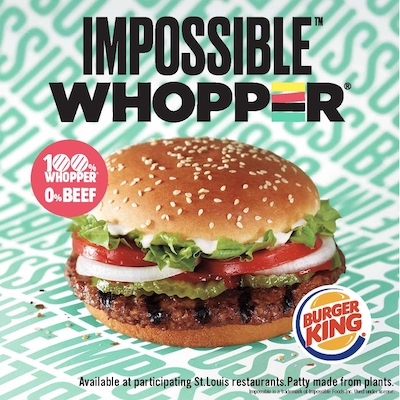 But Burger King, with about 7,000 locations in the U.S., could make the Impossible Burger even more widespread. And the chain isn’t messing around with a new creation: The Miami-based concept put the burger on its premium product, the Whopper, and then tricked customers into eating it for a video on the chain’s YouTube channel.

“It’s not just the coastal elite or fine-dining connoisseurs,” Lee said. “Everybody wants craveability. But they also want to feel better about their choice in picking a burger.

“It’s been great validation to see a sub-$2 Impossible White Castle Slider and an Impossible Slider. It’s meant for all.”