Clay Dover knew that business at Velvet Taco would be good this past Tuesday. Sales had been improving, especially since Texas opened dining rooms last week. Also, it was Cinco de Mayo—on Taco Tuesday.

And yet he was still surprised by the results.

At Mexican restaurants all over the country, the combination of May 5 falling on a Tuesday proved too much for the American consumer to resist—even with a global pandemic.

Even as operators prepared for a busier-than-usual day, they still found themselves surprised.

That included a number of local restaurants, many of which have been working to adjust to wide shifts in demand and new service strategies.

“Our system was completely overwhelmed with orders,” Acapulco Restaurante Mexicano, an eight-unit chain in Minnesota, wrote in a letter to customers this week.

But, he said, wait times were longer than usual, and phone lines were jammed. “It was clear we were underprepared for the very high volume of orders at some of our locations,” Hart said in an email.

“It has given us an opportunity to learn from and fine-tune how we’ll maintain our highest standards of friendly, fast and safe service of our made-to-order tacos as we return to dine-in service while also balancing the new reality of increased off-premise dining.”

At Tacos 4 Life, an 18-unit Mexican chain based in Conway, Ark., business was up 87% over the previous week. The company was also running a promotion for Nurse and Teacher Appreciation Week. “It was a very hectic day for our restaurant and the industry as a whole,” CEO Austin Samuelson said in an email. “Every single one of our locations were busy all day.”

Taco John’s CEO Jim Creel said cars lined up as many as 26 deep at the chain’s drive-thru locations.

The company was expecting a busy day. Sales had turned positive this month as consumers grew bolder about going for takeout. The chain also ran a promotion of five soft-shell tacos for $5.55.

Customers were ordering “mostly tacos,” he said, though everything else on the menu sold well, too.

The improved sales brought a sense of renewed optimism for the Cheyenne, Wyo.-based chain, which had seen substantial sales strength heading into the pandemic, including 11.8% same-store sales growth in February.

“I think Cinco de Mayo and Taco Tuesday combined was just big for the entire Mexican QSR sector,” Creel said. “I kept getting texts from franchisees on Tuesday evening saying they were up 61% or 39%. They were having a blast with it.”

Sales at Taco Bueno, the Dallas-based quick-service chain, were up about 25%, Guillermo Perales, president of the chain’s owner Sun Holdings, said in an interview.

Same-store sales at Mexican quick-service chain Taco Cabana were up 24% on Tuesday, a record for the chain, executives with owner Fiesta Restaurant Group told investors Thursday.

Both Del Taco and Fuzzy’s Taco Shop said they did strong sales, though they didn’t provide numbers. 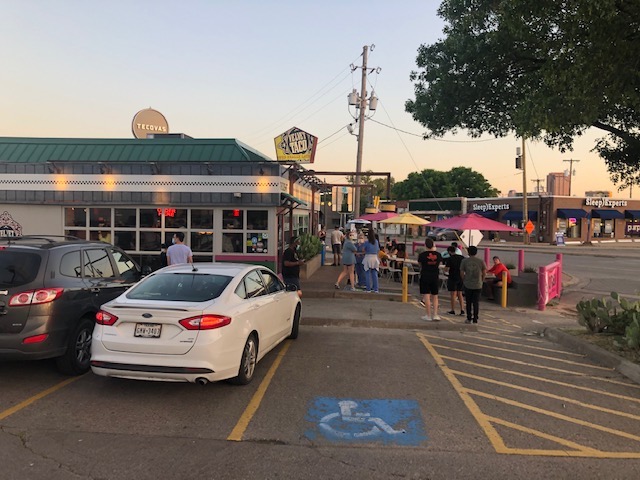 Customers lined up outside a Velvet Taco in Texas. (Photograph courtesy of Clay Dover)

At Velvet Taco, customers lined up socially distanced well into the parking lot, where customers milled around waiting for their takeout orders in the 80-degree sunshine. Sometimes, the company would send out a masked employee to direct traffic—the people, not the cars—and collect customers’ orders.

“You have to take that into account as you’re opening restaurants,” Dover said. “If everybody is standing 6 feet apart and you have 10 people in line, which is not a big deal for us, that’s 60 feet of lines.”

“Guests were accommodating for the most part,” he added. “We didn’t have any flare-ups.”

Nine of the chain’s 14 restaurants are open, eight of which are in Texas. Dover said customers purchased a lot of liquor, with the chain doing 4 times its typical liquor mix. The vast majority of the orders were for takeout, but some customers opted to take their meals to the chain’s patio.

Business was so brisk the chain turned off its third-party delivery apps.