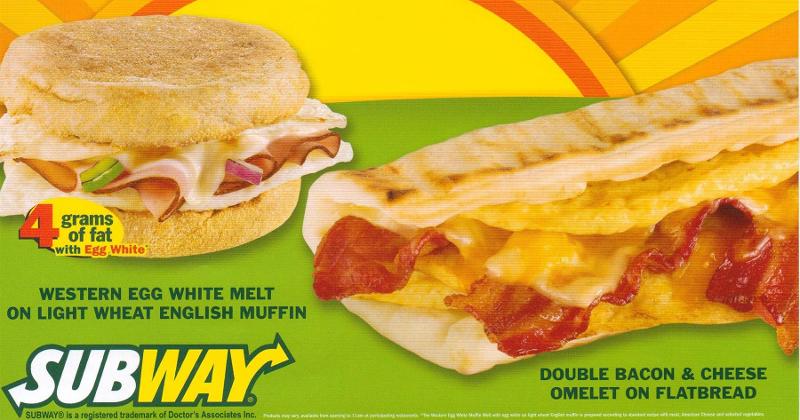 In 2010, Subway added breakfast to its 26,000 U.S. restaurants in a bid to improve unit volumes. After all, employees are already there in the morning, so why not open and start selling breakfast items?

That effort hasn’t really succeeded, at least on a national scale. And Subway executives said that, at least for now, breakfast will take a back seat while the chain works to reinvigorate its store base and its lunch and dinner sales.

“We’re not too deep into breakfast now,” CEO Suzanne Greco told RB in an interview last week. “We decided to put our efforts to” the chain’s broad transformation.

Greco called breakfast a “regional success,” saying that the sandwiches work well in some areas and not others.

She said that the chain would focus its marketing efforts on those regions where the daypart works well, rather than on any national scale.

“From a national perspective, we’re really focused on the overall customer experience, the digital transformation and the core health and wellness as well as the overall quality of what we’re serving,” Greco said.

Subway has tried marketing the daypart more aggressively, such as in 2016. For now, it appears, the chain is going to forgo a broader push to devote its marketing dollars toward getting customers back in the afternoons.

Subway’s traffic has declined 25% in the past five years, and its U.S. system sales last year declined 4%, according to the Technomic Top 500 Chain Restaurant Advance Report. Improving breakfast would theoretically provide an important boost to the chain’s low unit volumes of just more than $400,000 per store, which could keep more of those stores open.

All that said, Subway’s challenge in the morning is familiar throughout the restaurant industry.

For a long time, a number of restaurant chains have added breakfast, hoping that by simply adding the daypart, customers would come in, building sales while leveraging fixed costs.

But breakfast is a challenging daypart to add, and failed breakfast efforts seem to outnumber successful additions. Wendy’s, for instance, has tried a couple of times to add breakfast to no avail, and seems content with its lack of morning sales.

The a.m. meal is more habitual and convenience-oriented than other dayparts, and it’s difficult for a restaurant chain to get customers to break those habits.

Other factors are at play, too, notably location.

More than 30% of McDonald’s sales come at breakfast in part because the chain’s restaurants are located along commuting patterns, so customers can easily get in and out. Plus, most of that chain’s 14,000 locations have drive-thrus that make it even easier.

The same is true with other morning-focused chains, such as Starbucks.

Subway’s prevalence, in theory, should make it a convenient destination. No restaurant chain has as many locations as it does, but at the same time many of those locations are tucked away in strip malls and haven’t been targeted with breakfast in mind. Location matters in the restaurant business.

In the interview, Greco and other Subway executives described a mass effort that could, over time, shift ownership and relocate many of the chain’s units while also shrinking the chain’s overall size.

Perhaps over time that could provide some boost to the business and give reason for the chain to make a more concerted effort to get people to come in for breakfast. For now, it seems, the chain is focusing more on its other dayparts, and that’s probably the way it should be.