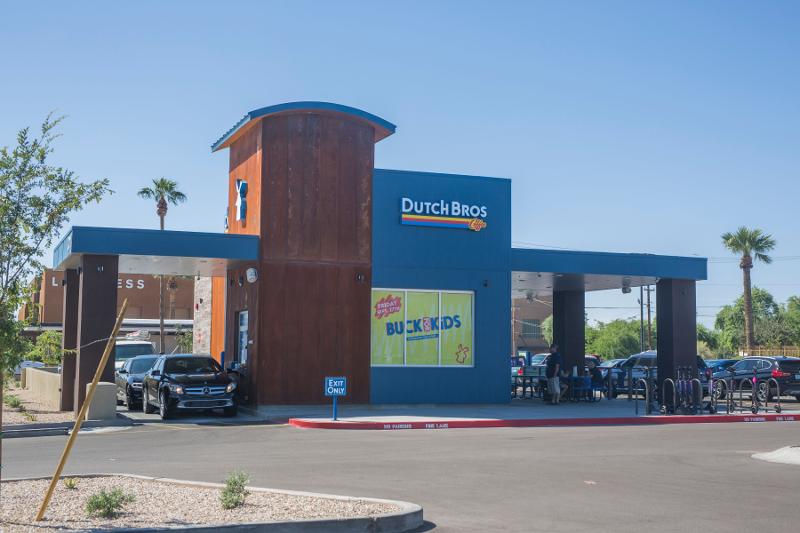 A single company has registered the names of more than two dozen U.S. brands, one of which is Dutch Bros. / Photograph: Shutterstock.

Chad Finkelstein, an attorney with the Toronto-based law firm Dale & Lessmann, was retained earlier this year by some U.S.-based restaurant chains interested in expanding into Canada. He performed a search for one of them and found that its trademark was registered by someone in Edmonton.

Two months later, he did another trademark search for another U.S. restaurant brand and found that its name, too, was registered. By the same person, the apparent owner of a now-closed restaurant in Edmonton called Habit Grill & Bar. It doesn’t appear to be related to the U.S. brand, Habit Burger Grill.

In all, this business owns or has applied for 38 Canadian trademarks, many of them for Habit, Habit Burger or Habit Grill, as well as many other names that may sound familiar to Americans: Dutch Bros, Rusty Taco, Flip’d, Torchy’s, Culver’s, Lazy Dog, Crumbl and Swig, among others. Just about all of them have been filed over the past 18 months.

Most of the companies were not initially aware of the trademark registrations and at least one of them—for Crumbl Cookies—has since been withdrawn. In all, more than two dozen U.S. brand names were registered by the same company, unbeknownst to the actual owners of the brands.

“I’d never thought I’d discover this many,” Finkelstein said in an interview. “Once or twice is a coincidence. But when it’s this volume, it’s not.”

Canada changed its trademark rules in 2019. The country no longer requires people or companies registering for trademarks to prove that they actually use them.

That made it much easier to register trademarks. And it led to growing concerns about “trademark squatting,” in which companies trademark obvious names or names of existing businesses that may want to do business in Canada at some point. They then work to extract some sort of compensation, similar to domain name squatting.

Canadian law is different from rules in the U.S., where companies must show they use a trademark. That makes it difficult for U.S businesses to understand. In Canada, “they’re never going to be asked by the trademark office whether they use [the trademark] or not,” Finkelstein said.

“Canadian trademark attorneys have been yelling about this for years,” he said.

Trademark disputes involving U.S. brands moving into Canada certainly existed before the law change. Target, for instance, somewhat famously had to go to court over its trademark there after a company opened some “Target Apparel” locations featuring a circular red logo similar to that of the Minneapolis-based retailer. That dispute was settled in 2012.

But the 2019 rule change made it much easier for Canadian companies to register trademarks for successful foreign brands. Earlier this year, however, a Canadian judge invalidated an apparent trademark identical to a successful Chinese chain called Ju Dian. The justice in the case said the trademark filed in Canada was a “bad faith” effort to seek “renumeration from the legitimate owner of the trademark.”

In this case, there has been no financial demand by the company that has registered the U.S. brand names. But Habit Grill out of Canada often registered for the trademarks of brand names shortly after those brands received some level of publicity. For instance, the “Chip City” name was registered in October 2022 for the operation of “bakery shop franchises.” That same month, the New York City-based cookie chain Chip City received a $10 million investment from Enlightened Hospitality Investments.

On June 15 of last year, meanwhile, the drive-thru coffee chain Dutch Bros announced that it filed confidentially for an IPO that would take place later in the year. Six days later, the name “Dutch Bros” was registered with Canadian trademark authorities to sell  “coffee, tea, cocoa, bakery goods, pastries, sandwiches.”

Emails to Habit Grill & Bar were not returned.

Finkelstein said there are simple things U.S. brands can do to ensure that they don’t run into this potential problem. First: If you’re even thinking of entering Canada over the next five years, register your mark.

“It’s inexpensive to file a trademark application,” Finkelstein said. “But it can be expensive to get it back from someone who’s applied for it.”

That can be part of evidence later to show that your brand is known in Canada, which could make it easier to justify that your brand is well known among Canadians. “That can matter when courts look at a trademark and who has priority,” Finkelstein said.

Or simply do a trademark search of your brand in Canada. You never know what you’ll find.