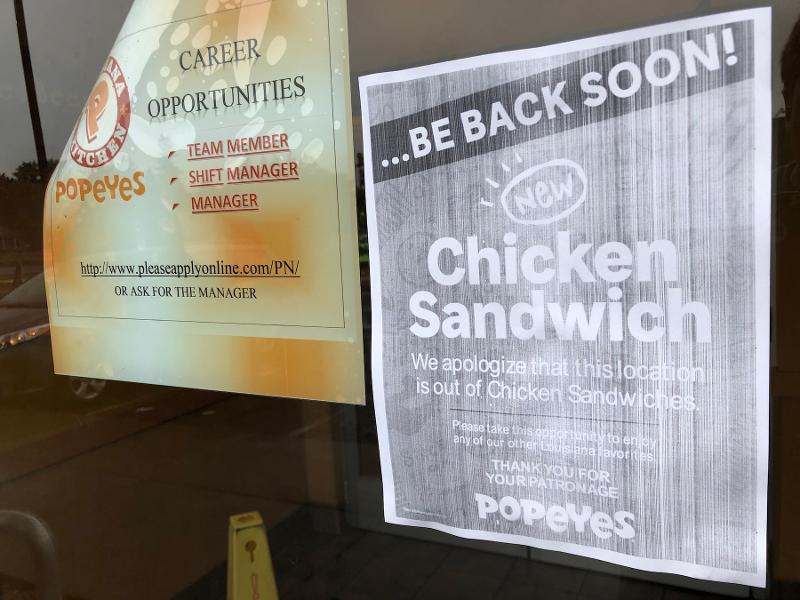 Popeyes Louisiana Kitchen’s same-store sales rose 38% in the U.S. in the fourth quarter, parent company Restaurant Brands International (RBI) said Monday, as the chain’s chicken sandwich proved to be one of the best new-product introductions in fast-food history.

“A good deal of the growth was driven by the launch of the chicken sandwich, which surely ranks among the greatest product launches in the history of QSR,” said Jose Cil, CEO of RBI, on the company’s fourth quarter earnings call. Globally, same-store sales rose 34.4% in the quarter ended Dec. 31 and 13% for the full year.

The company introduced the product in August and then tweeted at rival Chick-fil-A, which went viral and generated interest in the sandwich unlike anything the fast-food business has seen. Cars lined up for as long as an hour for days on end, and the company ran out of product in just two weeks.

Its reintroduction in November proved to be just as popular, driving remarkably strong sales around the country.

Cil noted that Popeyes was the top trending topic on Twitter during its relaunch and the top search on Google.

The media impressions proved to be more valuable than anything Popeyes could do with its ad budget. “We had billions of media impressions and generated earned media worth considerably more than the size of our entire annual U.S. ad fund spend,” Cil said.

Executives said the sandwich helped drive sales of other products. Most customers actually spent more on other products than on the sandwich itself, “resulting in very healthy check levels and incredibly valuable awareness and trial,” Cil said.

Indeed, he said later, only half of Popeyes’ orders in the fourth quarter even included a chicken sandwich.

That is expected to drive unit growth. Popeyes has a 12- to 18-month growth cycle, so that interest should translate into accelerating unit growth by the end of this year and into 2021, executives said.

“The performance in the U.S. of the Popeyes business has created a lot of excitement with our existing franchise partners in the U.S. as well as new, prospective investors that are very interested in being part of this system,” Cil said. “We think long term there is a lot of room for growth for Popeyes in the U.S.”