Robert Thompson began listing all the places where Punch Bowl Social is putting new locations this year, beginning with an opening next month in Milwaukee.

And then he just kept going, listing Dallas, and then Fort Worth for a small-box location, Salt Lake City, Austin, Miami, Washington, D.C., near the Nationals stadium, Phoenix …

“Yeah, this is our biggest year yet,” the founder and CEO of 15-unit Punch Bowl said while on a trip scouting locations for 2020. “We’ve been setting up for it. Some of our C-suite upgrades, that infrastructure will help us put it all in place.”

But Punch Bowl’s expansion won’t simply focus on the chain’s restaurant-slash-entertainment complexes. No, Thompson has big goals, including more entertainment options inside those restaurants such as darts and mini golf. And the chain is planning a boutique hotel.

“When you grow the way we do, you’re always paying attention to whether or not there’s an available on-ramp to the public market,” Thompson said. “The appropriate thing is to hire for the possibility. That’s what we’ve done.”

That includes Stacy Galligan, previously CFO for exercise chain Pure Barre and corporate controller for Smashburger, who was named CFO of Punch Bowl as part of a boost in the company’s executive leadership.

Thompson said the company was looking for someone “with some experience with pre-IPO prep, because you never know.”

There’s no timetable for a possible IPO, but that Punch Bowl is considering such a move now is a clear indication of how far it has come—not to mention Thompson’s sky-is-the-limit plans for his chain.

Thompson created Punch Bowl Social in Denver in 2010 and opened the first location there in 2012. The goal was fairly simple: to take the “eatertainment” idea to a new level.

Such concepts had traditionally centered on the games, choosing to focus on their enormous profitability even at the expense of food quality. But Thompson saw a glaring hole in the market and moved to fill it with a concept that features a bowling alley, shuffleboard and an arcade but also a higher-end menu.

“Nobody has put together the gaming with the scratch kitchen the way we do,” Thompson said.

It’s not like the company doesn’t innovate around its games. Punch Bowl is introducing new dart technology in several locations this year—real dart games with cork boards and steel-tipped darts, but that use cameras to determine where the dart lands to calculate scoring. 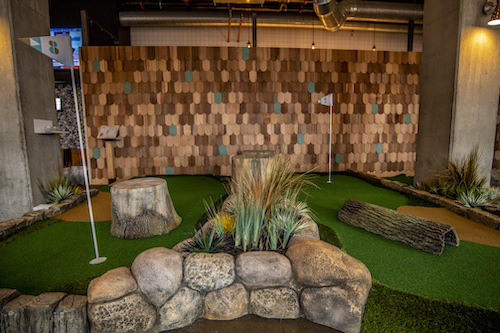 Indeed, Punch Bowl Social is focused intently on its experience and has no desire to join the takeout and delivery game. “We’re not going to innovate on that front,” Thompson said. “We’re the anti-takeout brand in the market. There are no experiences in opening your door and having DoorDash drop off food on your living room table. That’s not a consumer experience.”

“Until Amazon figures out how to deliver a private karaoke room and a bowling alley with 18 of your closest friends, we’re going to be an in-house experience.”

Both of those traits make Punch Bowl an attractive target for landlords that view restaurants increasingly as anchor tenants, rather than supplemental targets.

And Punch Bowl is pickier about its choices of locations. “It’s been interesting. Real estate always comes to us. We just know better which ones to say yes to,” Thompson said.

That is fueling the chain’s big year this year, as is a $20 million investment the company received last year from CrowdOut Capital. With so much going on, Punch Bowl needed to bolster its executive team. It named Peter Gaudreau—who helped Snooze, an A.M. Eatery grow from eight to 34 locations—chief operating officer, and added the aforementioned Galligan as CFO.

“On the operating side, we needed to bring in a fundamentalist,” Thompson said. “Somebody like Peter, but who also understood a growth brand. He understands scale, process and control.”

The chain’s growth will not just include large locations. The Fort Worth opening will be the company’s first smaller-footprint location, at about 12,000 to 15,000 square feet. “The small box allows us to open up in some markets that may be too small to justify a full Punch Bowl Social investment,” Thompson said, noting that the location has two bars instead of three and duckpin bowling rather than full-sized lanes.

But the chain isn’t just looking at smaller locations. It’s also eyeing something bigger: a hotel.

The company is currently seeking deals to create a boutique, experiential hotel, something Thompson has been working on for a couple of years.

It would have 100 to 150 rooms but feature some group rooms, which would make the bed count larger. The company is looking for a “perfect first location” for the concept. And, Thompson promised, “I can’t share where, but we may be honing in on that location.”

And in this lies Punch Bowl Social’s true goal: to become more than just a restaurant with a bowling alley.

“We believe that we’re more than just a food and beverage concept,” Thompson said. “We think that because millennials and Gen Z are so defined by their need to have experiences that translate into the experiential boutique category. By doing this, it really catapults us, it cements us, as a lifestyle brand for these generations.

“Those are the things that are going to help us be around for 20 more years, not coming and going over a decade. We think we have an opportunity to be an iconic, American brand.”