The economy is no longer dependent upon the restaurant industry for job growth. And that’s a good thing.

In June, restaurants added 16,400 jobs, according to the latest data from the U.S. Bureau of Labor Statistics. That continued a slowdown brought on by a combination of slowing industry growth and skyrocketing wages.

The economy added 213,000 jobs, meaning that restaurants created one out of every 13 jobs during the month.

That’s about right. Restaurants account for 8% of all nonfarm jobs, according to federal data, meaning that about one out of every 12.5 jobs in the U.S. involves providing prepared food to consumers.

But in the post-recessionary era, the restaurant industry had been accounting for a far greater percentage of overall job growth—as many as one in seven new jobs during the period from 2010 through 2017.

As sales have slowed, job growth has slowed, too.

So far this year, in fact, the industry has added fewer than 15,000 jobs a month, on average, according to a Restaurant Business analysis of jobs data.

But that’s down for the third straight year. In 2015, for instance, when restaurants were growing at a breakneck pace and sales were strong, the industry was adding an average of just under 35,000 employees per month. 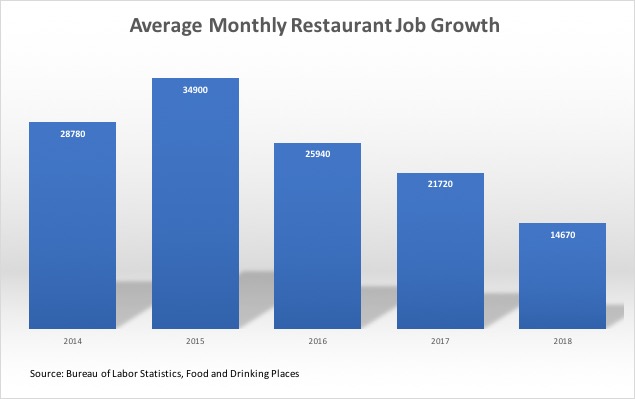 There are multiple problems with the industry accounting for as much job growth as it did during that period.

For one thing, restaurants rely on a healthy economy to generate sales. It needs other industries to create jobs and raise wages so consumers have money to spend.

The industry’s growth trajectory, especially in 2015, was therefore unsustainable. And it’s been proven in the years since, as same-store sales and traffic have suffered despite a relatively strong economy otherwise.

It’s no coincidence that same-store sales took a dive in 2016, the year after the industry added those 35,000 jobs each month. Restaurants grew faster than the willingness or ability of consumers to dine out, and consumers responded by spreading their money around.

There were other problems with that much job growth.

Labor costs, of course, have risen considerably. Industry growth hasn’t been spread around as much as necessary, with restaurants flocking to urban and suburban areas, driving up wages.

A few years ago, $15 an hour was a fantasy concocted by union activists in a drive to increase membership.

Today, $15 an hour is the going rate in many areas. A Chick-fil-A in California is paying $18 an hour.

The restaurant industry is facing a long-term, slow-growth environment until real wages begin to dramatically increase (which could force the Federal Reserve to raise interest rates more quickly to slow that growth further, potentially prompting a recession) or the industry loses some of its excess supply.

For now, however, the restaurant industry’s job growth rate is on a more stable trajectory. So at least it has stopped the bleeding.