People may know Hooters for its sexy servers (and OK, sure, its chicken wings), but the chain is hoping soon, consumers will think of it as a destination for watching sports. And Hooters of America, the Atlanta-based franchise owner of more than 430 units, is investing an average of $450,000 per location to make it happen—a big part of which is going toward outfitting units with state-of-the-art televisions, control systems and sports-broadcast packages. 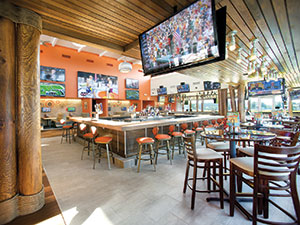 How important is sports to Hooters’ renovation effort, which also includes larger windows to brighten the space and sleek new design finishes? “So important that we changed the rooflines to accommodate bigger and better TVs,” says Chris Duncan, Hooters of America’s chief information officer. “Our ideal is for guests to be able to see four to six screens from any seat.”

It’s a huge investment for the casual-dining chain, which has spent millions since renovations began in June 2013 and vows to rehab 25 units a year over the next five years.  While many have speculated that such moves are designed to attract more women and families to the bro-heavy concept, Duncan says its goals are broader. “The big thing for us is not to go after women and families. What we’re talking about is getting rid of the ‘nay’ votes,” he says. “We want to create a place where everyone feels comfortable.”

Duncan says operators looking to upgrade their A/V systems will generally find more favorable conditions today than in years past. Costs for control systems to manage what’s shown on multiple TVs have come down dramatically. “What used to be a $20,000 to $30,000 line item is now a $400 line item,” he says. Part of the reason is that such systems now can be controlled using tablets, “which makes them easier and better for managers to use,” he says. The improved speed, ease of use and lower cost are changes that enable the operator to buy new, bigger and better TVs.

When it comes to TVs, customers have high expectations today. “HD is just the table stakes. It’s a [minimum] requirement now, not an added feature,” Duncan says. Hooters already is rolling out the next generation of high-definition—4K ultra HD—in some of its restaurants and waiting for 4K programming to come in. “Ultra HD will be the new table stakes in three or four years,” he predicts.

In the remodeled Hooters locations with the upgraded A/V systems—which in some cases include gigantic video walls with multiple monitors, as well as more than 50 LED TVs throughout the restaurant—the company has seen double-digit-plus sales increases, Duncan says. Customer reaction, he adds, has been 100 percent positive. “They say [the space] is brighter, and the TVs are a thousand times better.” The fact that it may attract more women (who Duncan says are too often stereotyped as not liking sports) is just a bonus. ­