Although American craft beer gets most of the ink and blog posts these days, there is a lot more happening in the ale arena. With sales of U.S. domestic macrobrews in decline and imports growing at just 1.3 percent, the big brewers are trying harder, with new products and brand extensions. 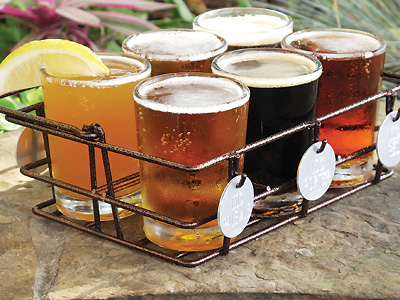 Anheuser-Busch made a big splash at the Super Bowl when it debuted Black Crown. The new specialty brew is an amber lager with a higher alcohol content (6 percent ABV vs. Bud’s 5), but is still “beechwood finished,” according to the company. The recipe for Black Crown was developed as part of a contest between 12 A-B brewmasters; a sampler pack was issued as Brewmasters’ Project 12, which included the winning formula.

Another A-B InBev intro was a line extension of Beck’s, its venerable German brand. Beck’s Sapphire debuted during New Year’s festivities in a sleek black bottle. The name refers to German Saphir hops that flavor this 6 percent ABV (vs. 5 for flagship Beck’s) golden pilsner.

Inspired by their American craft counterparts, microbrewers are developing their own artisan scenes in countries as varied as Italy, Ireland, Scandinavia and Mexico. That hasn’t gone unnoticed. Recently, Molson Coors purchased Irish micro Franciscan Well. The global brewer plans to expand production at the Cork, Ireland, facility and eventually export to the U.S. and other markets. On the flip side, the Brooklyn Brewery just announced plans to build an 8,000-barrel brewery in Stockholm in partnership with Swedish crafter Carnegie Brewing and Carlsberg Sweden. It’s a natural fit for the Brooklyn-based brewery: Sweden is its largest export market and second largest market after New York City.

“It will be a lot of fun to work with professional brewers,” says Caliendo, who is also Lazy Dog’s executive chef. For this project he is collaborating with Firestone Walker Brewing Company in Paso Robles, which produces the chain’s exclusive house beers.

Caliendo is considering a Belgian blonde ale for the anniversary one-off. “That’s a style people seem to really like, and we don’t currently have one,” he notes, adding that he has been experimenting with small batches in the company’s state-of-the-art test bar and kitchen.

For the launch, Caliendo plans to tap a cask-conditioned version of the ale—a 10-gallon firkin in each of the 13 Lazy Dog Café restaurants. After that, the Anniversary Ale will be kegged for service. The collaboration will be featured in a sampler flight as well as by the glass. The VP estimates he will need to brew at least 300 kegs to supply the limited-time promotion. He started this month to work with Firestone’s brewmaster on scaling up those recipes for full-scale production.

“It will be a lot of fun to pop that puppy open and kick off our anniversary promotion,” enthuses Caliendo.