But that’s the point. The urban-centric concept over the past five years has given Taco Bell the ability to experiment with different strategies, all in the name of giving consumers a better experience.

Now the chain is pushing the concept to another level. It plans to open a Cantina location by this fall that will feature an updated digital experience throughout the restaurant. And it plans to open another in San Ramon, Calif., with a video game lounge by the end of summer.

It also plans to convert a trio of suburban Taco Bells into Cantinas, with the idea of using them to test new strategies it could then apply at all of its 7,000 restaurants.

“We’re a brand that’s not afraid to try different things,” Mike Grams, Taco Bell’s president and global chief operating officer, said in an interview with Restaurant Business. “Five years ago, I don’t know that we’d think we’d be pushing the boundaries into gaming lounges. But 100%, Cantina gives us license to elevate the experience. So now it doesn’t feel like as much of a risk. Five years ago it might have.”

“We try different things,” he added. “If it doesn’t work, we start something else.”

Taco Bell has about 30 Cantina locations, many of which have alcohol and upgraded indoor experiences. It has more than 60 urban restaurants overall.

The company is a traditional drive-thru suburban concept, getting about 70% of its sales through that lane. It created Cantina for smaller, walk-in urban locations. The concept helps the company test upgraded experiences inside of its restaurants to drive more visits. Cantina also gives the company an opportunity to figure out how to operate in smaller spaces.

The company opened a location in Las Vegas, for instance, complete with a wedding chapel, DJ booth and Twisted Freezes that can be customized with vodka, tequila or rum.

The location is two stories but only 1,800 square feet. It is the busiest Taco Bell in the world. “The idea originated with a franchisee,” Grams said. “Let’s take the Cantina and create this experiential piece. It fits Vegas well.”

The Cantinas also expand what it means to be a Taco Bell. Many feature open kitchens. “It breaks down stereotypes,” Grams said. “We don’t hide our people. We have open kitchens. We showcase what we do.”

Since then, Taco Bell has taken what it has learned from its Cantina restaurants and applied it at other locations. For instance, the company started using kiosks in Manhattan, and now every free-standing Taco Bell will feature kiosks and digital menu boards both inside and in the drive-thru. It has kiosks in all of its locations.

Cantinas are “urban learning labs,” Grams said. “It provides a great opportunity to listen to consumers and get it right.”

That kind of thinking is important at a time when the industry is highly competitive and customers are spreading their dollars around.

That’s been a key ingredient in Taco Bell’s success. The chain has been one of the best-performing large chains over the past decade. U.S. system sales have increased 41% since 2013, a rate of growth driven by remarkably consistent same-store sales: It has had only two quarterly declines over that period, and the key performance figure has averaged 3.6%.

“Brands, particularly mature brands, have to evolve with the customer base,” Grams said. 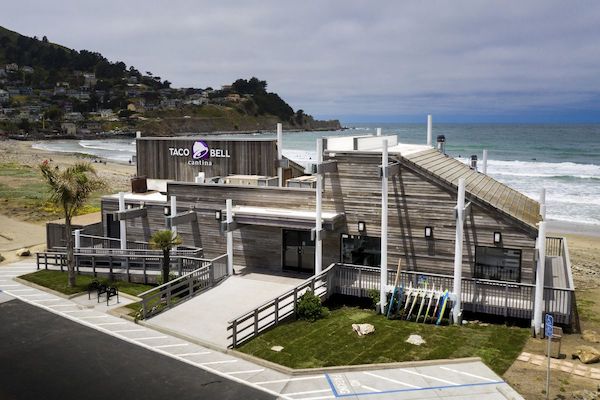 Taco Bell’s ultimate goal is to become a $20 billion brand globally, a strategy that will require considerable expansion outside of the U.S. But it also includes more Cantinas. Grams said he foresees a future with as many as 300 to 400 locations of the Cantina concept, each a bit different to appeal to customers in local communities.

“We’ve been a drive-thru-only business for so long,” Grams said. “We got really good at drive-thrus. But how do we make Taco Bell work in New York, Chicago or Los Angeles?”