Fast-casual pizza chains emerged from the recession with a unique business model providing customers the experience of building their own, individualized pies. The model helped numerous chains become some of the fastest-growing restaurants in the country.

But as customers shift more spending to takeout and delivery, making that experience less relevant to those customers, fast-casual pizza players are increasingly turning to a different, yet altogether familiar option: larger, “shareable” pizzas.

This week, Los Angeles-based Blaze Pizza announced that it is testing a 14-inch pizza, designed in part to serve delivery and carryout customers and billed as “perfect for sharing.”

It joins Rave Restaurant Group’s Pie Five, which introduced 14-inch pizzas in 2017 and says a growing number of its customers are choosing that option.

“It opens up a whole new opportunity for us,” Bob Bafundo, president of Rave Restaurant Group, said in an interview with Restaurant Business. “Where fast-casual pizza is much more focused on the single guest or small group, the 14-inch now opens us up to larger groups. It opens up delivery. It opens up catering down the line.” 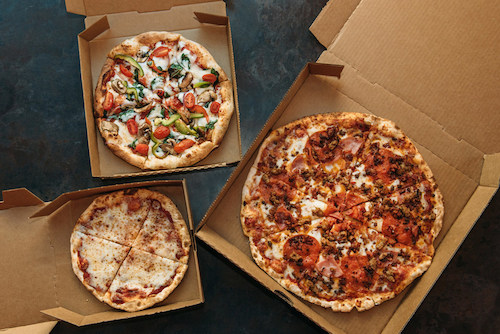 Takeout sales have been growing at restaurants for years, but that trend has accelerated more recently—especially as third-party delivery providers have emerged. The five largest delivery players generated nearly $10 billion in sales last year, up 55% year over year, according to Restaurant Business sister company Technomic.

Fast-casual pizza players, built largely for lunch business around a more dine-in experience, are starting to take on this takeout trend head-on.

Blaze said that its off-premise digital sales more than doubled last year and now account for 10% of the chain’s sales. The company has inked a deal with Postmates for delivery in certain key markets and plans to start the service in Southern California and Arizona with the provider.

The company also hired former Nestle executive Daniela Simpson to be general manager, where her job will be to “build Blaze into a significant player in the pizza delivery and carryout business.”

Blaze's large pizzas are similar to its 11-inch personal pizzas. The chain is testing the 14-inch variety in nine locations in California and Nevada, including a large pepperoni pizza for $8.95 and two large one-topping pizzas for $20. Blaze promised a national rollout to be announced soon.

Blaze is one of the fastest-growing restaurant concepts in the U.S. and expects system sales to be $400 million this year. It has well over 300 locations. Backers include basketball star LeBron James, Maria Shriver, movie producer John Davis and Boston Red Sox co-owner Tom Werner.

Pie Five could not be in a more different position. The Dallas-based chain first opened in 2011, having evolved from an express unit of parent company Pizza Inn—now named Rave. The chain quickly spread through franchising and reached a peak of 100 locations two years ago.

But it has shed a third of those locations thanks to steep same-store sales declines. And Bafundo said the company expects more “consolidation” in the coming months.

That has perhaps given the chain more incentive to test out aggressive new ideas.

It debuted a cauliflower crust last year, for instance, that now represents more than 10% of the chain’s sales. And it also debuted the larger pizzas.

“We’ve tweaked the model,” Bafundo said, noting the chain is planning to add a line of calzones next year “to bring in something hand-held, more portable, more convenient.”

The chain has also started adding drive-thru windows to its locations to capture off-premise business. And it has created a new, smaller “Goldilocks” prototype that it says is more efficient and built for a more takeout-oriented crowd.

“We think going forward, we’re also going to work hard at this off-premise option,” Bafundo said. “That’s going to be key in terms of moving the brand forward.”

As for those larger, 14-inch pies? “They’re doing extremely well,” Bafundo said, noting that they are selling at roughly the same percentage as the cauliflower crust pizzas.

When a unit opens with the 14-inch pies as an option, the larger pizzas have a “significantly larger percentage of the mix,” he said.

Still, it all sounds familiar: a pizza chain serving large pies aimed at groups who either take the pizza with them or have it delivered. Isn’t that like, say, Domino’s Pizza or Pizza Hut?

“There’s a couple of key differences,” Bafundo said. “We’re delivering quality product that’s made fresh for you the way you want it. The fact that we can now deliver it in 14-inch, it just opens up to nights and weekends.

“In my view, fast-casual pizza is best positioned to deliver individual pizzas as full margin at lunch. Not many have been able to do that over the course of the last 40 years. But to be successful, we have to be able to compete on nights and weekends. We will compete against some of the bigger players. If we’re doing it with five different crusts and the ability to customize, we’ll be on a high-quality level.”