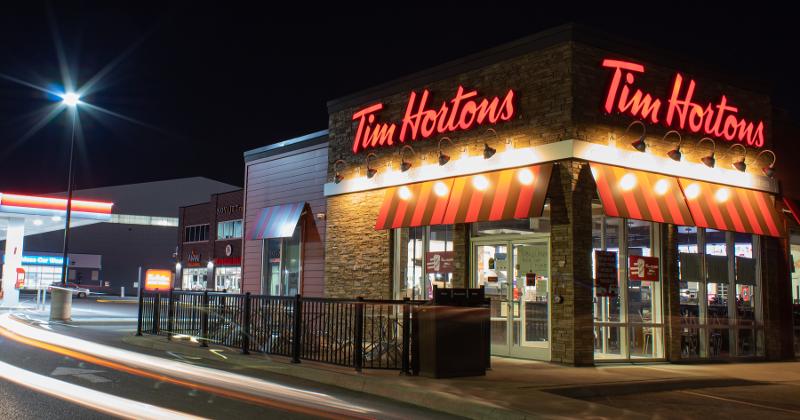 Tim Hortons, the Canadian coffee and doughnut chain, has had a harder time recovering from the pandemic than many of its U.S. counterparts, mostly because of its presence north of the border, where reopening has been slower to take.

The reopening in Canada has been paused more recently because of the delta variant, meaning it’s taking longer for the workers to return to the office and get a coffee and Timbits on their way.

Despite this, executives with parent company Restaurant Brands International said this week, sales in the morning have mostly recovered. “Even with the drag in workplace mobility, we’ve gotten the morning daypart close to flat,” RBI CEO José Cil said on Monday.

Now the company just needs to get its lunch and dinner business back.

Same-store sales rose 9.5% at the chain’s Canadian locations in the third quarter ended Sept. 30. Yet on a two-year cumulative basis they remain down 5.5%. By comparison, the chain’s locations outside of Canada were up 16.5% over 2019.

While Tims is growing rapidly in international markets, it remains mostly a Canadian brand, with nearly four out of every five of the chain’s 5,100 locations in the country. Thus, it relies heavily on the reopening status in Canada and movements of Canadians.

At the moment, those Canadians aren’t getting their dinners or late-night doughnuts from Tims. “Two-year sales outside of dinner and late-night are roughly flat to above where we were in 2019,” Cil said.

Part of the problem is that many Tims have been closed during those hours because the customers just weren’t there. That is starting to change. “We’re now in Q4 beginning to reopen later night hours for a big component of the Tims Canada system,” Cil said.

Executives believe they have long-term growth potential in the afternoon and evening hours. Cil noted that 60% of the restaurant industry’s sales in Canada are at lunch and dinner. Tims gets just 35% of its business during those dayparts. “We think it’s a unique opportunity to increase share as we continue to develop offerings and build off strong performers,” Cil said, referring to the chain’s line of sandwiches called “Craveables.”

Tims pushed a line of grilled wrap sandwiches at lunch. But it also believes it needs to develop more menu items to compete more broadly at dinner. “We think there’s a path to get back to pre-pandemic levels and then growing from there, which is an exciting long-term opportunity for the business,” Cil said.

One other opportunity for the business, however, could simply be for the reopening of more urban areas. The chain’s urban and “super urban” locations remain below pre-pandemic levels as they take a more cautious approach to reopening.

Yet the company believes that it can grow its business even if customers don’t more fully return to their previous habits. The company has focused more on the quality of its breakfast foods, emphasizing freshly cracked eggs, for instance, and is improving hot beverages.

Improving lunch and dinner would also help with that.

“We see a really strong opportunity to continue to grow even if mobility doesn’t fully come back,” Cil said. “We’re not waiting around.”