The federal government has been shut down for more than a month now, and, though the Senate is apparently taking up a pair of bills that would potentially end the stalemate, there appears to be little confidence of it ending anytime soon.

But let’s be optimistic for a moment and say that it does. What would the impact be on restaurant sales?

Based on historical evidence, not much.

Then again, the historical data is limited and maybe not even comparable. This shutdown is longer than any other government closure on record, and the longer it goes, the more its impact will be felt.

The shutdown has directly affected 800,000 employees, including airport security screeners and air traffic controllers who are working without pay. That’s 0.5% of the total nonfarm workforce. But it also affects some 4 million federal contractors, meaning that the shutdown is hurting some 3% of the total workforce. That is not insignificant.

The longer this is allowed to go on, the more spending gets reduced and the bigger the hit on the overall economy. The White House’s own economist says the economy would have no growth this quarter if the shutdown lasts through March. Just less than half of economists polled by Bloomberg believe the shutdown could trigger a recession this year, which would definitely hurt restaurant sales.

Early indications, however, have not revealed much of an impact on the industry. If anything, sales accelerated in December even as the shutdown took hold.

Same-store sales were at their best levels in three years, according to Black Box Intelligence.

That said, the biggest difference this time is that employees began missing paychecks this month, while in prior shutdowns employees quickly returned to work.

We looked at the past two major shutdowns, in 1995 and in 2013, and analyzed restaurant sales data based on federal numbers.

Federal data can be tricky—Technomic doesn’t use it. Take it with a grain of salt.

But much like the December index figures demonstrated, there is no indication with either of the previous shutdowns that they influenced sales all that much. If anything, sales accelerated during those events.

Restaurant sales at the time were somewhat soft. But they were moderately less soft that December when the shutdown occurred. 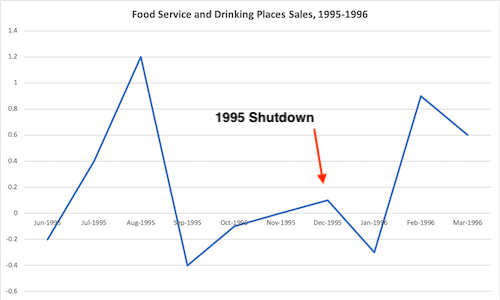 In October 2013, meanwhile, the shutdown lasted for 16 days and affected the same number of workers as the current shutdown. Sales clearly accelerated that month. 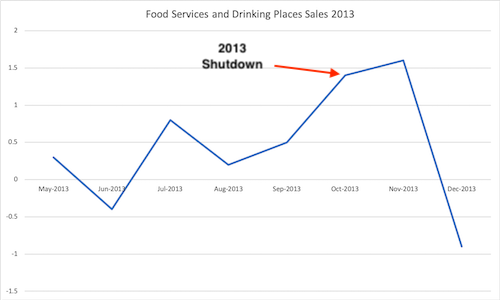 This shutdown is more than twice as long as the one in 2013. And the number of employees is far greater now than it was in 1995.

It’s difficult to imagine 800,000 people going unpaid for more than a month to be anything but a negative influence on restaurants, which require a healthy dose of working consumers who are receiving paychecks to generate sales.

Still, as the evidence suggests, there would be only a moderate impact at best if the shutdown ends soon.

That’s apparently a big “if.”