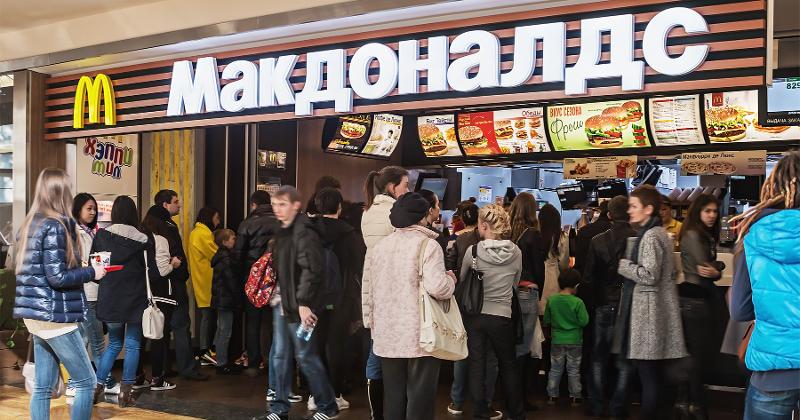 McDonald’s and Starbucks on Tuesday said they would temporarily close locations in Russia as a growing number of U.S. companies take steps to cease investment in the nation in the aftermath of its invasion of Ukraine.

Earlier in the day, KFC owner Yum Brands said it would pause development and redirect profits from the country toward humanitarian efforts as it assesses its options in the country. By the end of the day, it too said it would close company-operated KFC locations there and that it would suspend Pizza Hut operations there.

Starbucks also said it would temporarily close its restaurants in Russia.

The moves by the world’s biggest restaurant companies came amid an extraordinary day that saw numerous U.S. restaurant chains and other businesses, such as CocaCola, vow to stop development, close stores or cease doing business, while others offered donations to relief agencies.

The moves came amid considerable pressure on U.S. restaurant chains to take steps to divest from Russia. Much of that pressure was aimed at McDonald’s, the world’s largest restaurant chain which operates 847 locations in the country—84% of which are company-owned.

“The conflict in Ukraine and the humanitarian crisis in Europe has caused unspeakable suffering to innocent people,” McDonald’s CEO Chris Kempczinski said in a message to employees and franchisees on Tuesday. “As a system, we join the world in condemning aggression and violence and praying for peace.”

Kempczinski said the company would continue to pay the salaries for the company’s 62,000 employees in Russia. “The situation is extraordinarily challenging for a global brand like ours, and there are many considerations,” he said. “In Russia, we employ 62,000 people who have poured their heart and soul into our McDonald’s brand to serve their communities.”

Not long after McDonald’s made its statement, Starbucks said that its licensee in Russia would pause store operations and continue paying nearly 2,000 employees. The coffee giant has 130 locations in the country. “We continue to watch the tragic events unfold and, today, we have decided to suspend all business activity in Russia, including shipment of all Starbucks products,” CEO Kevin Johnson said in a letter to employees.

Restaurant Brands International, which owns Burger King, committed to donating $3 million to support Ukrainian refugees, including $1 million to the United Nations refugee agency. Burger King operators also promised $2 million worth of meal vouchers for refugees arriving in their countries. RBI owns Burger King, one of the largest Western brands in the country with more than 800 locations, all franchisee-owned.

The issue highlights some of the complexities restaurant chains face when dealing with Russia. With some 144 million people, Russia has been a major source of growth for a U.S. fast-food industry intent on making its presence known around the globe. McDonald’s and KFC in particular have had success there. KFC operates more than 1,000 locations in the country. Russia and other Central and Eastern European nations account for 8% of KFC system sales.

Yet the Russian invasion of Ukraine has led many Western nations to impose harsh sanctions on the country. The Biden administration said this week it would cease importing Russian oil, which helped send gas prices to record levels. Yet there is also pressure on U.S. companies to stop doing business in Russia.

Hundreds have already done so, according to Jeffrey Sonnenfeld, senior associate dean for leadership studies at the Yale School of Management. Companies like Apple closed retail shops in the country, and on Tuesday, Shell Oil said it would stop doing business in Russia.

Pressure had been building for fast-food restaurants to take similar steps. Sonnenfeld included McDonald’s, Starbucks and Yum Brands among a list of companies that have “significant exposure” to Russia. That list also features numerous companies that have curtailed their Russian operations.

McDonald’s had remained largely quiet on the topic until Tuesday. That left an opening for some of the chain’s critics to take aim at the company for not taking more deliberate steps.

“It’s shameful that McDonald’s is putting profits ahead of taking a stand for democracy in Ukraine and around the world,” Kiara Sotelo, a Chicago McDonald’s worker and a leader with the Fight for $15 and a Union movement, said in a statement sent by the organization. Fight for $15 is a union-backed movement that has targeted McDonald’s for years in its push to unionize the fast-food sector.

In his letter, Kempczinski said he spoke with the McDonald’s board and made the decision to close the restaurants temporarily.

He also said McDonald’s is paying the full salaries for the company’s employees in Ukraine, where the company owns more than 100 locations. The company has also donated $5 million to its Employee Assistance Fund and is supporting efforts by the International Red Cross.

“We understand the impact this will have on our Russian colleagues and partners,” Kempczinski said. He noted that the company “will continue to assess the situation and determine if any additional measures are required.” He also added that it is “impossible to predict” when the restaurants might reopen.

KFC and Pizza Hut, also owned by Yum, are primarily franchise-owned in Russia. Yum said in a statement that it was assessing its options in the country. “Yum Brands has suspended all investment and restaurant development in Russia while we continue to assess additional options,” the company said. “Yum will also redirect profits from operations in Russia to humanitarian efforts.”

The company plans to donate $1 million to the Red Cross and said it is activating the Yum Disaster Relief Fund to support employees of franchises in Ukraine. It is also matching donations by employees to various charities that are assisting refugees.

Starbucks CEO Johnson said late last week that the company would donate royalties from those operations to relief efforts in Ukraine. The Starbucks Foundation has also donated $500,000 to World Central Kitchen and the Red Cross. Its European and Asian market is also working to support those in need.

They aren’t the only restaurant chains with operations in Russia, however. The sandwich giant Subway operates about 450 locations there. A spokesperson for the chain did not respond to a request for comment.

UPDATE: This story has been changed to reflect news that McDonald’s is closing its Russian restaurants. It has also been changed to add new information from Restaurant Brands International and Starbucks.