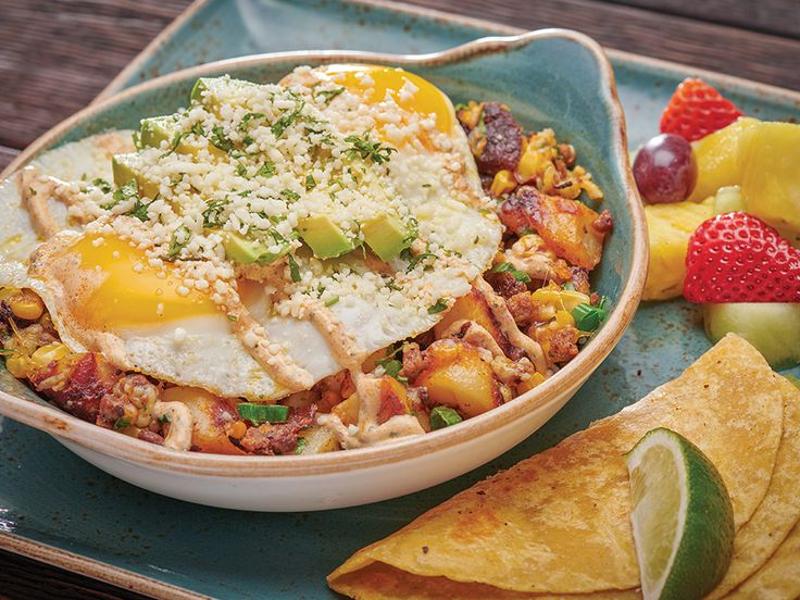 Breakfast at home clearly got a new lease on life during the pandemic shutdown. Consumer analysts at Whysdom reported an increase in the weekday preparation of pancakes, waffles and French toast, items more typically associated with a weekend or holiday breakfast. What’s more, appliances like waffle irons saw a commensurate jump in sales.

It’s likely that most of those waffle irons are now gathering dust on the shelf right next to the expensive bread makers that consumers snatched up in 2020. The return to the office is moving forward, albeit in fits and starts, and the early daypart is percolating along with it. While most of the morning drive-time menu will remain geared toward convenience, the larger breakfast revival will be facilitated in no small part by extraordinary levels of innovation as chefs raid the global pantry to fashion creative, multicultural eye openers.

Desayuno. Mexican-accented breakfast received a major boost when McDonald’s introduced its Breakfast Burrito in 1991. The Tex-Mex item was created by a pair of Houston franchisees and spurred a spate of competition from Taco Bell to Chick-fil-A to IHOP and The Cheesecake Factory, where the long-running favorite is made with chicken chorizo and spicy ranchero sauce.

The near ubiquity and ready acceptance of breakfast burritos opened the door to a much wider range of items,like First Watch’s limited-time Elote Mexican Street Corn Hash with house-roasted summer corn, chorizo, and chipotle cream with a side of tortillas. The chain scored bonus points for using the Spanish word in the title and then immediately translating it, thus enhancing both its authenticity and its accessibility. The special Churro French Toast at Philadelphia’s Revolution Taco taps into the current churro craze and tops the toast with caramelized plantains, crushed churros and a nifty crème brȗlée tres leches sauce.

Birria, the hearty meat stew that swept Mexican menus in the past 18 months, combines comforting familiarity with a flavor punch and has been punching things up pre-lunch at Hash Kitchen, which takes a preemptive approach with a self-described The Best F#*%ing Birria Hash. The claim is supported with chili-braised beef and a fried egg. Dirty Habit in Washington D.C. pushes boundaries with a true international mash-up: The Birria Shakshuka here melds Mexico with the Middle East and puts poached eggs in a chili-beef broth with cilantro crema.

Frishtik. Israeli-influenced breakfasts have risen in popularity over the recent past driven by the emerging generation of talented and telegenic Israeli-American chefs, who been experimenting with shakshuka. The dish, which originated in North Africa, has been part of Sephardic cookery for centuries, and while the basics include eggs cooked in a sauce of tomatoes, peppers, onion and garlic, it has become the starting point for lots of other interpretations. Tatte Bakery in Boston features a trio of options like Lamb Meatball Shakshuka with spicy labneh cheese and homemade challah bread. Saba in New Orleans takes a vegetarian-friendly approach with Shakshuka with Seasonal Vegetables, while the Vegan Shakshuka at Balaboosta in New York City substitutes tofu for eggs.

There are other Mediterranean influences at work, too. The Morning Hummus at Butcher & Bee in Charleston, S.C., combines a poached egg with harissa, schug, a Middle-Eastern hot sauce, and a side of pita bread. In a similar vein, the Breakfast Pita at Butcher & Bee’s sibling concept The Daily is made with Israeli salad, tahini, schug, hummus, cabbage and chive. And at Agnes Café & Provisions in Houston, the “loosely Mediterranean menu” features a creative Baklava Granola with pistachios, Bulgarian yogurt and honey.

Colazione. Italianate dishes on morning menus look suspiciously like their familiar evening counterparts. The combination of bacon and cream that make up spaghetti carbonara for dinner, for example, transitions easily to breakfast and brunch. OEB Breakfast in Scottsdale, AZ., plays a clever variation on the theme with Gnocchi Breakfast Carbonara that’s amped up with double-smoked bacon, brown-butter hollandaise and Grana Padano cheese. The Carbonara Eggs Benedict at Miami’s Eating House is served on local bread and finished with a flourish of black truffle.

Pasta plays well in the early hours, too, as at The Ordinary Pub in Savannah, Ga. which offers Breakfast Mac & Cheese with andouille sausage, cheese sauce, bacon and sunnyside-up egg; and Adorn, the spiffy restaurant in the Four Seasons Hotel in Chicago, goes one better with Breakfast Bolognese that combines bucatini, short rib ragu and a poached egg.

Consumers might be persuaded to forego their day-old, cold-pizza breakfast for North Italia’s Spicy Breakfast Pizza alla Vodka. Launched last fall and true to its name, it borrows the vodka-tomato sauce from the popular pasta favorite, then adds Italian sausage, pancetta, cheese and two eggs, finished with Calabrian chili oil and fennel pollen. San Franciscans can rise and shine with Breakfast Pizza topped with smoked ham, fontina and eggs at Rose’s; and patrons of the Happy Joe’s chain can wake up and smell the pizza with Omelet Pizzas that start with pan-style crust and include scrambled eggs, cheese and a choice of toppings like sausage and Canadian bacon.

Asian in the A.M. Asian-inflected breakfasts are as varied as the cuisines they represent and tend to be firmly anchored to familiar American favorites. Sizzling hot Mister Mao, which opened to raves in New Orleans last year, serves up “inauthentic global-meets-Southern cuisine” like Kashmiri Hot Chicken Benedict served on a Hawaiian pineapple roll with Vidalia onion-milk gravy.

The Breakfast Club menu at Chicago’s Little Goat features pan-Asian fancies like This Little Piggy Went to China that tops a scallion-Cheddar biscuit with Sichuan pork sausage and smoked blueberries, or the Okonomiyaki (Pronounced Yum) that puts pork belly, poached egg and Kewpie mayo on a savory Japanese pancake. The Paratha Burrito piles cheese, eggs and avocado-bean salad on the eponymous Indian flatbread.

Bò Càphé, a French-Vietnamese diner in New York City, trades day for night with breakfast versions of two standards: Egg Banh Mi Sandwich and Bao Benedict with papaya salad. Both are available all day long. The chicken thighs in the Chicken & Waffles at Moon Rabbit, a contemporary Vietnamese restaurant in Washington D.C., get a boost from chili-maple fish sauce.

Speaking of waffles, they are the breakfast carriers of choice at a pair of Seattle restaurants. At Nue, Chengdu Chicken and Waffles marry fried chicken wings with green Szechuan peppercorns, fish sauce and Thai chili; while at Super Six, signature Chicken & Waffles put chicken thighs atop Hong Kong cake along with hot honey, Sriracha and haupia syrup made with coconut milk. And at Taste Bar + Kitchen in Houston, General Tso’s Chicken and Waffles nod to the Chinese-American favorite and balance its chili-induced heat with sweet praline-pecan waffles.