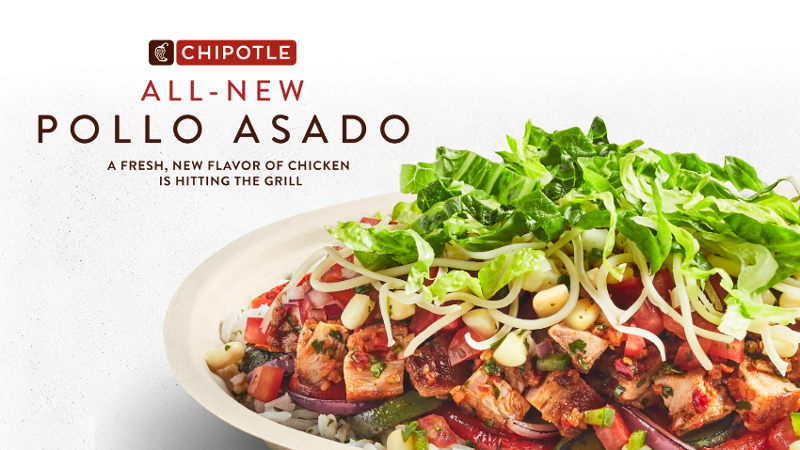 Last November, Pollo Asado was tested at 95 restaurants in Cincinnati and Sacramento.

“Chicken is easily our most popular protein, with many of our most loyal Chipotle customers ordering it the majority of the time,” CMO Chris Brandt said in a statement. “We’re thrilled to introduce fans to another flavor of chicken that brings a whole new dimension to any Chipotle order and will certainly be a crowd pleaser.”

Pollo Asado is marinated with lime and cilantro before being tossed in spices and seared in small batches daily on the plancha in each restaurant, the chain said. The flavor profile features cumin, coriander, garlic, lime juice, guajillo peppers and cilantro.

For much of its history, Chipotle did little in the way of menu innovation. In recent years, though, the Newport Beach, Calif.-based brand has been aggressive in its LTOs and new menu items.

“We obviously want to listen to what our customers say they would like to see on the menu,” CEO Brian Niccol told analysts last month. “That’s why we’ve done things like quesadillas, improved the queso. We want to listen to what habits and trends are happening. So that’s why you see us do things like leading with cauliflower rice, plant-based chorizo … That’s why we’re really excited about this Pollo Asado …”

The 3,000-unit fast casual said it uses new menu items to drive frequency, build buzz and acquire new customers, all the while driving participating in its digital rewards program.

Niccol said the chain will continue to come out with two to three menu innovations annually.

To incentivize trial of Pollo Asado, Chipotle is offering free delivery on all menu items that include it from Monday through March 20.