But after four days of walking the Show floor and attending culinary demos and educational sessions, I took some time to dig a little deeper and consider how plant-based and other trends may impact menus in the long run. These are my takeaways. 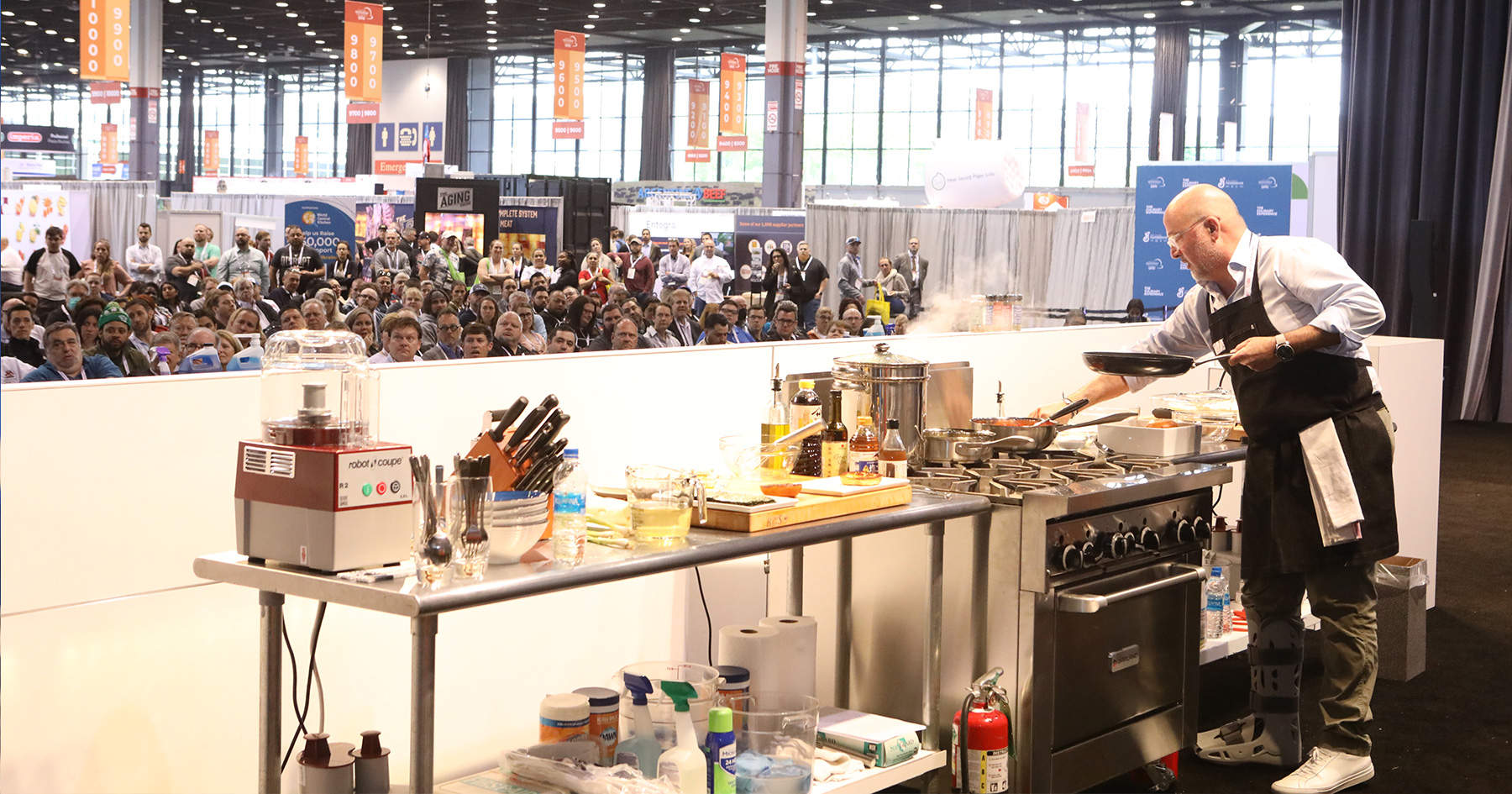 Companies usually market plant-based burgers, sausage and chicken in simple applications—sandwiches, pizza and the like. But during culinary demos at the Show, two well-known chefs got their hands on the products and took them to the next level.

TV personality Andrew Zimmern showcased a breaded plant-based chicken breast from Tindle in a Japanese noodle prep. He quickly put together a dashi broth with four simple ingredients, then sliced the breaded “chicken” into very thin strips to resemble noodles. Garnished with a handful of scallions and dried seaweed, he created a protein-rich cold noodle salad that’s usually made with somen, a type of Japanese noodle.

Edward Lee, chef-owner of 610 Magnolia in Louisville and celebrated author, demonstrated how Plantspired’s Korean plant-based steak could be expanded into other global dishes. The tofu-based “beef” is sliced, marinated, then char-grilled to give it the authentic look and flavor of Korean bulgogi.

Lee sauteed the product with onions to get a nice caramelization, then used it as a base for a rich onion soup, topped with a gruyere and crème fraiche toasted baguette. For his second dish, the plant-based bulgogi filled an empanada. 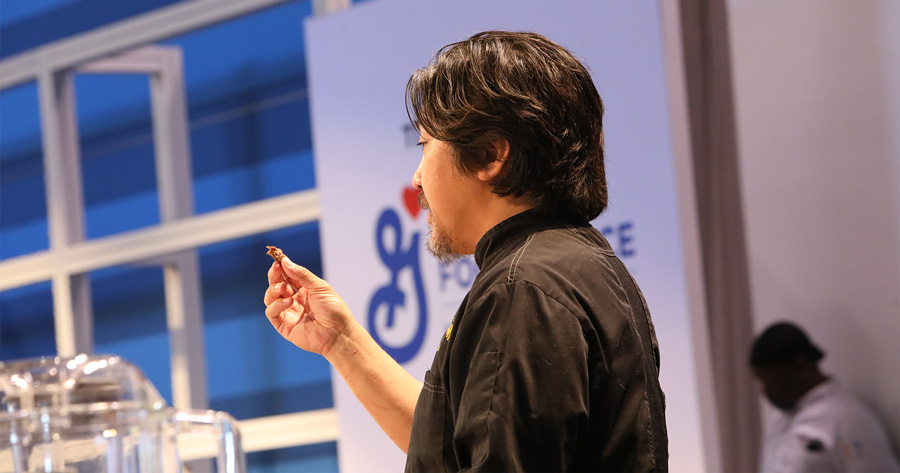 “You can make non-Korean dishes with the product even though it’s bulgogi-flavored,” said Lee.

“Since this isn’t a plant-based ground beef product, it is very versatile and has a good chew, like steak.”

While the array of plant-based proteins and milks appeal to vegans, this group of eaters number less than 6% of the U.S. population. Flexitarians have grown the most as a dining demographic, according to Technomic. These are consumers who favor a plant-forward diet but will occasionally eat animal products.

Carin Stutz, CEO of Native Foods, told RB’s Peter Romeo during an educational session that many flexitarians seek out her 12-unit all-vegan restaurant chain. “We appeal to flexitarians who don’t look at meat as the center of the plate,” she said. “They are looking to cut back on meat, but not eliminate it.” 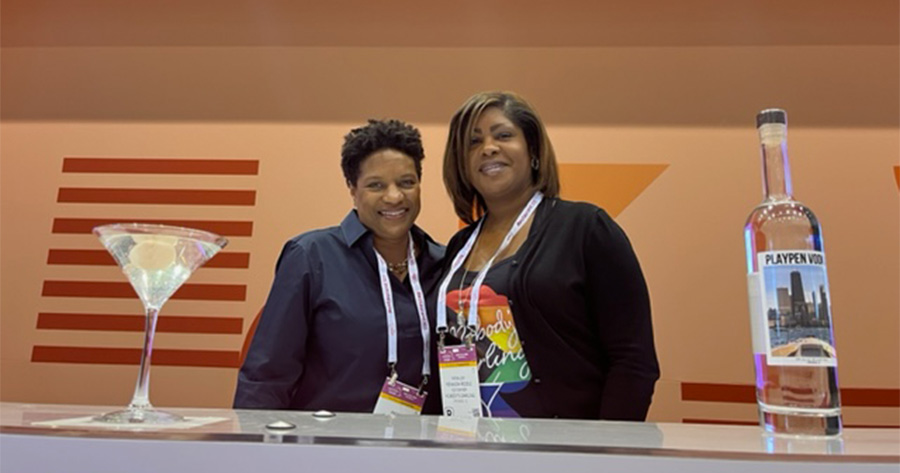 Bars and restaurants narrow their niches

Chefs, bartenders and restaurateurs are putting more of a cultural stamp on their concepts and menus and are targeting customers who want the same. Nobody’s Darling in Chicago was founded by Angela Barnes and Renauda Riddle, two Black women with a mission to create an inclusive female-centric, queer-friendly bar.

“We wanted a place where women would feel comfortable and we could build community,” said Barnes, during a mixology demo at the Show.

The bar serves signature cocktails like the Southside Lychee Martini, which the audience sampled during the demo, as well as the Darling Mule and Frida Pisco Sour.

While neighborhood independent restaurants offer food menus with a distinct cultural point of view, the trend is newer to the bar scene.

At the educational session “Pouring for the Culture,” speakers Kelly Killian and Nelson German discussed how diversity is being amplified on the drinks side of the menu.

German, chef-owner of Sobre Mesa and alaMar in Oakland, Calif., is of Dominican heritage and tells the stories of Caribbean and African culture through cocktails. Sobre Mesa’s list highlights small-batch rums from Haiti, Trinidad, Puerto Rico and the Dominican Republic, as well as ingredients such as jerk bitters, soursop puree, mango brown sugar syrup and allspice—all reflective of the Caribbean.

Technomic’s Lizzy Freier and David Henkes’ presentation on Novel Menu Trends pointed out that 27% of consumers are eating more unique types of global foods and beverages than they did two years ago. And restaurants are where customers tend to try these items more than 25% of the time.

But ongoing labor issues can challenge kitchens to expand their global culinary reach into more adventurous directions. Food and beverage companies are meeting the challenge with authentic, value-added food and beverage products.

Available for sampling at the Show were Japanese furikake, frozen Argentinian chimichurri, Korean doenjang and Chinese chili crisp, among other global ingredients. Since 36% of consumers are more likely to try a new or unique flavor if it’s showcased in a familiar way, according to Technomic, it makes sense for operators to sprinkle furikake on fries, chimichurri on flatbread and chili crisp atop deviled eggs.

On the rise: Ingredients from Ghana, Nigeria, Central America and Western Asia, according to Freier and Henkes.

Zero- and low-proof cocktails have grown exponentially in the last couple of years, but as was evidenced at the Show, manufacturers continue to elevate the spirits, mixers and other ingredients that go into them.

It might be passe to call alcohol-free drinks mocktails, but however they’re labeled, they are here to stay. And get even better.

Spirit-free cocktails from Blind Tiger come in flavor profiles including the smoky-citrus Ward 8 and the Sidecar; they can be poured over ice as-is or mixed with alcohol for guests who want some buzz.

Zero-alcohol beers and wines are now available in specific styles from Gruvi, like Juicy IPA and Mocha Nitro Stout. The company also offers wines without alcohol in prosecco and rose varietals.

And on the spirits side, Ritual’s tequila alternative is blended with blood orange, lime, mint and club soda into a complex alcohol-free Citrus Ritual cocktail at Armitage Alehouse in Chicago.

Henkes said he has seen so much creativity with nonalcoholic drinks, beer and wine that he’s calling it “the adult beverage trend of the year.”