Flighty may best describe the 2014 restaurant customer. End-of-year trend predictions revealed that he or she may be seeking adventurous flavors on one visit, value on another. Vegan choices may be important to one demographic, while healthy options are an everyday essential to another. Dayparts are blurring, and the burgeoning DIY crowd craves customization. Some restaurants are trying to hit several of these hot buttons at once while others are tapping one profitable sweet spot. 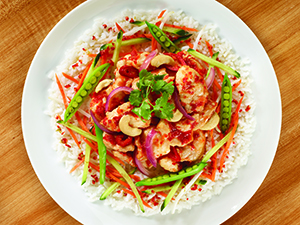 Pei Wei Asian Diner is of the former camp, as it kicks off its lighter, brighter, fresher initiative this month. “We took a step back to see what consumers want and what is trending, then narrowed that down a bit,” says Phil Butler, chief creative culinary chef of the 190-unit fast-casual concept based in Scottsdale, Ariz. “About 95 percent of our menu is driven by consumer request.”

Highly customizable is another guest-driven trend that’s always on the front burner. For many of Pei Wei’s menu items, patrons can choose their protein (chicken, steak or shrimp), cooking method (wok-seared or steamed) and spice level (mild to hot). “A big focus in 2014 is how to elevate customization,” says brand manager Chris Epper.

Pei Wei’s just-launched Thai Lime & Chile not only follows the customizable model, it delivers “a full flavor experience,” says Butler. “Consumers give us credit for incorporating many layers of flavor with complexity and depth.” Citrus, fish sauce and brown sugar mingle in this dish, with on-trend pickled flavors as an accent. The kitchen pickles Fresno chilies inhouse. The dish is served over fresh steamed vegetables and rice, providing multiple layers of texture, too. Thai Lime & Chile had the best consumer preference rating for hitting the lighter, brighter, fresher benchmark, says Epper. It also allowed the culinary team to take a deeper dive into Southeast Asia.

Ingredients first. Another fast casual that embraces several trends is Fresh & Co. The nine-location New York City-based concept is kind of a new-age salad bar that focuses on better quality, seasonal, locally sourced ingredients, many of which fit vegan guidelines. There may be 40 to 50 items available on any given day. “Giving people lots of choice is fundamental to running our business,” says Executive Chef Jeremy Leech. That thinking is building momentum among the concept’s 22 to 40-year-old core customer base, he adds.

The latest addition to the Fresh & Co. brand is a quinoa bar—an idea that incorporates the trendy ancient grain into the mix. “We liked the idea of a create-your-own pasta bar but in a healthier niche. Quinoa is a blank canvas for customization,” says Leech, “plus our customers are asking for gluten-free [options].”

Each quinoa bowl starts with organic red and white quinoa and locally grown kale. Chicken, turkey and shrimp are available protein toppers, but many diners opt for smoked tofu, seitan and a new meat-free chicken substitute made from pea protein. Guests are offered an array of sauces to mix in, which include sweet chili, soy ginger and chipotle vinaigrette, and several vegetables; for winter, choices include Jerusalem artichokes and roasted Brussels sprouts.

Although customized quinoa bowls are a lure, Leech’s chef-designed choices are very popular. “We try to offer a middle-of-the-road Asian or Latin experience, using recognizable ingredients,” he says.

The chef has found several other ways to boost health at breakfast. He uses heart-healthy rice oil to cook eggs, bakes breads with whole grains and seeds, uses buckwheat flour in pancakes and offers a housemade Kick Starter juice, blended from celery, kale, apples and ginger. “I sell about a gallon a day right now,” says Rourke. He hopes to increase that figure and expand grab-and-go options when he sets up a display refrigerator later this winter.

1. Healthy eating. Americans are conflicted about eating healthier. Mintel’s Healthy Dining Trends (July 2013) found that 62 percent of consumers “try to eat healthier these days” but 43 percent “like to treat myself to foods not good for me.”

3. Global palates. Millennials—especially those at the older end—have led the acceleration of internationalization, reports GfK Roper Consumer Trends. Thai, Japanese and Greek/Middle Eastern are mainstream; Indian/Pakistani is on its way.