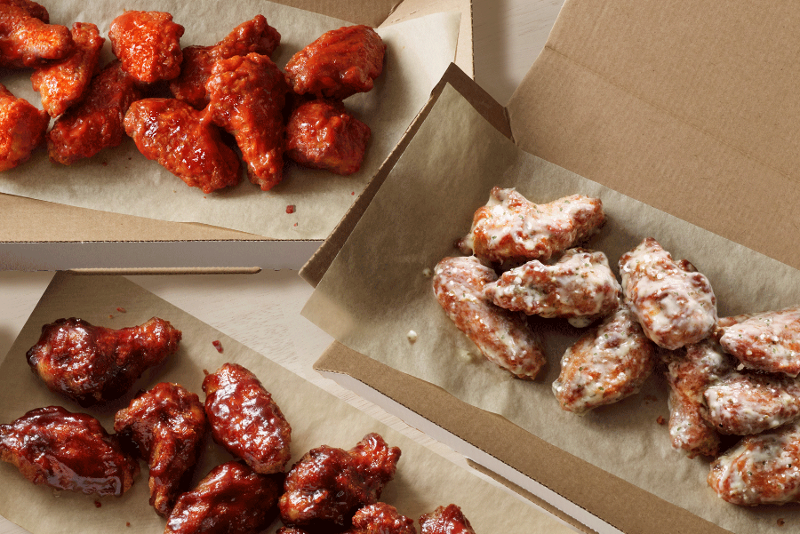 Chicken wings have long been offered as a side for Domino's customers to order along with their pizza. But the chain had been tracking the huge consumer demand for wings over the last couple of years and the explosive growth of several national concepts dedicated to chicken wings. It was time for an upgrade.

“We sold a tremendous amount of chicken, but research revealed there was a gap in the lineup,” says Domino’s CMO Art D’Elia. “We didn’t offer hot Buffalo sauce, and that’s synonymous with wings. And we wanted to optimize our barbecue sauce.”

Three years in the works

Domino’s spent three years of R&D and market testing before launching what CEO Ritch Allison referred to as the “greatly improved” wings in a Q2 2020 earnings call. “We totally redesigned the wing, from fat content, to texture, to preparation and sauces,” says D’Elia.

It starts with the sourcing. Domino’s now contracts with four chicken suppliers to offer a wing that’s designed to be baked. “Testing revealed that consumers wanted a wing with a better, firmer texture,” says D’Elia. “Everything at Domino’s goes through the pizza oven, so our wings are baked and fat content is important.”

Most chicken wings are fried, but those get soggy during delivery, he adds. “We pride ourselves on a baked wing that can be delivered,” he adds. Domino’s uses a small corrugated box for delivery to retain the texture.

Once the wings come out of the oven, the sauce is applied post-bake. Previously, Domino’s offered a mild-flavored barbecue sauce, and while that’s still an option, customers can now choose a new honey barbecue sauce, too. Also remaining from the previous menu is sweet mango habanero sauce, a guest favorite.

But new on the roster is the aforementioned hot Buffalo hot sauce—the original that catapulted chicken wings to nationwide popularity years ago. And Domino’s leveraged “the big trend in white barbecue sauces with chicken” to introduce garlic-Parmesan sauce, says D’Elia. “In internal tastings the white sauce came out on top,” he adds.

The upgraded wings and optimized set of sauces launched in July across all 6,200 Domino’s locations. As part of the launch, the chain distributed coupons for consumers to get 10 wings for $7.99. Most of the major wing chains charge 99 cents a wing, says D’Elia. “We wanted to offer more variety for pizza carryout, so customers can either get a large pizza for $7.99 or 10 wings.”

Right now, Domino’s is promoting the wings on digital channels but will eventually advertise on TV, he adds. “Pizza and wings are the two hot categories in the industry, and the demand for both accelerated dramatically during COVID,” says D’Elia,