Animation by Nico Heins via Shutterstock

How do you transform a slice of French toast covered with sticky syrup into a portable, fast-food breakfast to eat on the run?

Cut the slice up into sticks, give the sticks a crisp coating and serve the syrup as a dip. With napkins, the dip won't even dribble mess up the car.

Burger King was the first chain to offer French Toast Sticks back in 1986, and they're still on its menu. Fast-forward to 2022, and the breakfast item is popping up everywhere.

Wendy’s is the latest brand to jump on the trend, announcing Tuesday that Homestyle French Toast Sticks will be launching nationwide on its breakfast menu on Aug. 15.

The chain now joins Burger King, Sonic, Roy Rogers, McDonald’s, Jack in the Box and other fast-food brands in taking on this sweet, dunkable finger food.

Wendy’s version of the sticks boasts a soft, custardy interior with hints of vanilla and a crisp, golden-brown exterior. The Homestyle French Toast Sticks can be paired with a new syrup dip and ordered in both a 4- and 6-piece size. 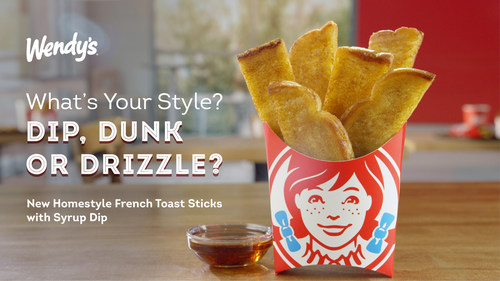 Wendy’s entered the breakfast daypart in March 2020. Breakfast sales have been strong since the get-go, growing to 25% in 2021.

“Our Homestyle French Toast Sticks strike a perfect note of nostalgia and bring even more morning flavor to our menu—this time with something sweet,” Carl Loredo, Wendy’s CMO, said in a statement.

When Burger King first launched French Toast Sticks, they were accompanied by a “dripless” maple-flavored sauce, designed to be eaten on the run.

Portability is still a big selling point, as consumer demand for food-to-go continues to be strong.

Jack in the Box introduced its version in 2005, but its French toast sticks were since discontinued. This July, the deep-fried French Toast Sticks returned to Jack's menu as a limited-time offer, selling all day for $2 (three to an order with a syrup dip.)

Sonic offers French Toast Sticks on its permanent menu and McDonald’s has menued them from time to time as a breakfast LTO.

And just before Wendy’s announced its entry into the category, Roy Rogers launched French Toast Sticks as a summer LTO at the end of July.

“We looked at traditional French Toast Sticks and ideated on how to make them even better,” Mark Jenkins, senior director of marketing at Roy Rogers, said in a statement. “The addition of powdered sugar and sweet raspberry sauce takes them to an entirely new level.”

Why the abundance of French toast sticks now? Perhaps the timing is tied into back-to-school season. They’re kid-friendly and perfectly sized for a grab-and-go breakfast.

It's a crapshoot whether the kids will get to school without any sticky syrup drips on their clothes.