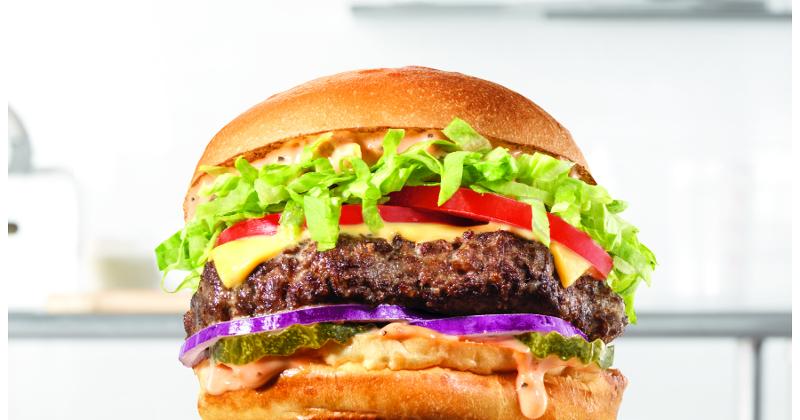 Arby’s does not have grills at its 3,500 locations. Nor does it want them.

But the sandwich chain has long wanted to add a burger to the menu without adding extra equipment or capital expense.

“At Arby’s, we like to innovate around products that exist in the category but people are settling for billions instead of the best,” said CMO Patrick Schwing. “We saw an opportunity to create a bigger, better burger so customers don’t have to settle.”

During the pandemic, Arby’s six-member culinary team, led by Associate Manager of Culinary Innovation Jason Truelove, began researching and developing a way to deliver a premium burger with a juicy interior and crusty exterior—no flipping on a grill required.

Sous vide turned out to be the solution.

Arby’s had previously used the cooking technique to bring its duck sandwich to the menu, but “people don’t usually sous vide ground beef,” said Truelove. “We spent a lot of time in the kitchen sous viding before we got it right. Texture was the biggest hurdle.”

Truelove discovered that the fat to meat ratio in the beef was key to achieving the desired texture. He and the team worked with a supplier to pinpoint the blend that would preserve the marbling and juiciness of the beef during the sous vide process.

They worked on a number of iterations, he said, ending with a blend that incorporates highly marbled beef from American Wagyu cattle. The final burger is 52% American Wagyu beef and 48% ground beef from other high-quality cattle breeds; 100% Wagyu ground beef does not produce as good a result.

Arby’s supplier delivers the beef blend formed into 6.4-ounce patties and already prepared sous vide-style. At each location, the patties are then reheated in the fryer for less than 2 minutes. “The fryer gives them a nice crispy edge and retains the flavor and juiciness of the beef,” said Truelove. It also achieves the right internal temperature and pink interior.

“We cracked the code through lots of trial and error,” Truelove said.

Plus, the execution doesn’t put extra strain on the back-of-house crew—a priority during the R&D journey. “It was a little serendipitous that sous vide is the perfect process to retain the burger’s quality and is easily replicable across all our locations,” said Schwing.

The Deluxe Wagyu Steakhouse Burger is served on a brioche bun, topped with American cheese, shredded lettuce, tomato, pickles, red onion and a special burger sauce. The sauce is the only new ingredient to Arby's.

“The burger sauce is a mix of ketchup, mustard, mayo, relish and a little Sriracha to give it some heat. It really highlights the Wagyu,” said Truelove.

Customers can also opt for the Bacon Ranch Wagyu Steakhouse Burger, a variation topped with bacon and Parmesan peppercorn ranch sauce. Those ingredients were also already in house.

Marketing focuses on the quality hook. “We knew we wanted to talk about Wagyu, as it denotes a premium burger, and market around the steakhouse platform,” said Schwing. “We’ve marketed other steakhouse items in the past.”

Photos are central to the campaign, he added—the visuals tell the story and lots of words are unnecessary.

Put to the test

“When we put the burger in front of consumers we didn’t tell them where it was coming from,” said Truelove. “They thought it was from a steakhouse; it has that steakhouse bite.”

Arby’s Wagyu Steakhouse Burger is priced at $5.99, higher than its competitors in the fast-food burger space, but customers appreciate the value, said Schwing, “especially when you compare it to a real steakhouse, where a similar burger can cost $15-$20.

The burger has been out for just over a week, but so far, it’s a hit, said Schwing. “It’s running double what we forecasted,” he said. “And the burger is getting great reviews on social media.”

The Wagyu Steakhouse Burger will run as a limited-time offer through July 31.

Could it ever make it to the core menu and firmly position Arby’s as a fast-food burger concept? “We’d never rule that out,” said Schwing.

What he’s more definitive about is that Arby’s will continue to do more forms of steak on sandwiches. “Steakhouse and Smokehouse are two platforms that we’ll continue to innovate against,” he said.

Behind the Menu  Burgers  LTOs  Menu