With the weather getting chillier and the holiday season quickly approaching, many operators are starting to give more thought to their soup offerings. 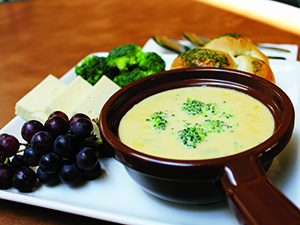 Although soups are a perennial customer favorite during the fall and winter months, chain restaurants that make soup a priority during the entire year can take advantage of its business-boosting power, according to Maeve Webster, senior director at Chicago research firm Datassential. “Soups can, and should, be a focus for year-round innovation,” she says. “It’s hard to make an item work hard for a business if it’s not a focus and only impactful for a few months.”

While consumers might gravitate toward soups during the colder months, soups also have the power to drive business during the rest of the year as well. According to Chicago research firm Technomic’s 2014 Soup & Salad Consumer Trend Report, 46 percent of consumers visit certain restaurants specifically because they enjoy the soups offered there.

As both a versatile and profitable menu item, soups can drive revenue for chain operators in several ways:

58 percent of consumers state they’re more likely to order soup as a combo meal rather than a single item, according to Technomic, and 51 percent of consumers say it’s important to be able to bundle soup with other items. Despite this insight, the incidence of combo meals on menus has dropped in recent years, says Webster. Operators who offer bundled or combo meals can take advantage of the incremental revenue from these meals—provided they menu them in a way that showcases value and quality.

“Soups and other side, appetizer and dessert items can drive check averages through increased attachment ordering,” says Webster. “Consumers have moved away from combo meals in search of cheaper options, and restaurants and other operators now need to create ordering opportunities that drive increased ordering.”

“There are so many important trends that soups can leverage,” says Webster. For example, seasonality of ingredients, fresh ingredients, produce and interactive options (e.g., soups garnished by guests at the table) are all trends that are a natural fit for soup’s versatility, according to Webster.

In addition, soups can be a low-risk way for consumers to try bold or ethnic flavors that they might be otherwise unfamiliar with. According to Technomic, 50 percent of consumers say they want to try unique soups, and more than a third report purchasing soup in order to try something new. By offering soups that are growing on menus, such as Latin or Asian-inspired soups, fruit soups or soups that include on-trend vegetables, such as vegetable-beef soup, chain operators can appeal to consumers who are looking for something beyond traditional chowders or chicken noodle varieties.

Soups are often a choice health-conscious consumers gravitate toward, particularly broth-based soups or soups that prominently feature vegetables. Additionally, the portion sizes of soups are naturally very flexible, says Webster, which can make them an even more appealing healthy choice.

Furthermore, according to a recent Datassential Menu Trends report, health is one of the key trends for soups on today’s menus; they’re often menued with health and wellness buzzwords such as gluten-free, vegan, organic and vegetarian.

Ready to get started?  Get more information about making your soups standout, sign up for a free market test, and explore articles, tools and tips to help you navigate the ever-changing chain foodservice landscape.