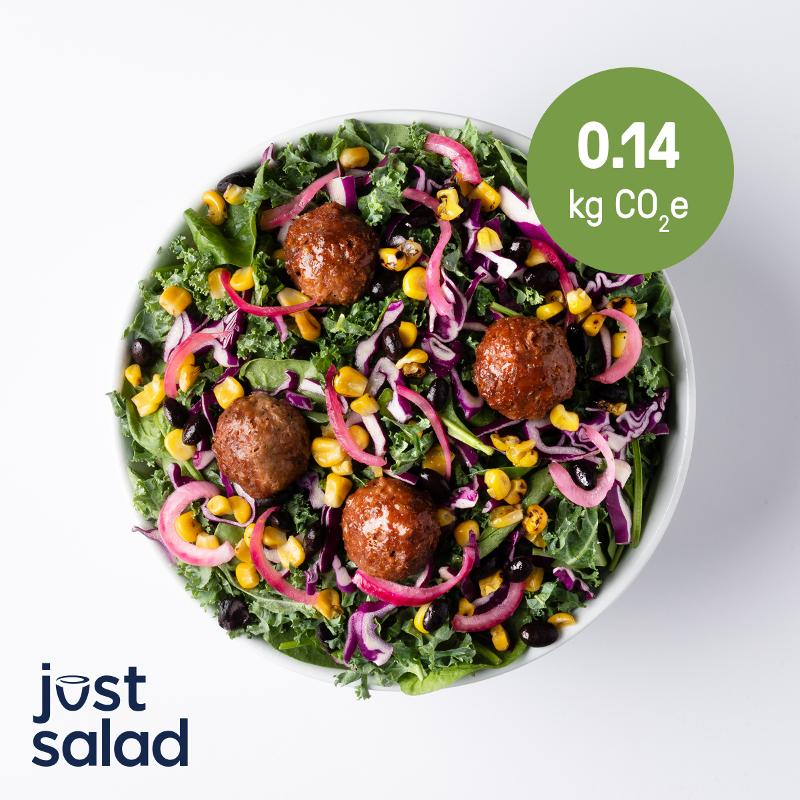 What if people could calculate their carbon footprint the same way they count calories?

Just Salad is hoping to help diners do just that by adding carbon labeling to its menu. Starting in September, diners will be able to see the carbon dioxide equivalent—a standard unit for measuring carbon emissions—associated with each menu item. They’ll even be able to calculate the footprint of customized salads.

The 42-unit New York-based chain has long been an innovator in sustainability. It has a reusable bowl program that’s been recognized by the EPA, and last fall it removed beef from its menu in favor of a plant-based analogue. The idea behind its latest endeavor is to encourage diners to think not only about their own health when dining out but also the planet’s, said Sandra Noonan, the chain’s chief sustainability officer.

“The striking statistic for us was that 26% of global carbon emissions are related to food production,” Noonan said. “And as the climate crisis escalates, a business that operates in the food industry has to be thinking about the link between food and climate.”

Just Salad says it is the first restaurant to carbon-label its menu. Companies in other industries are making similar moves. Consumer goods giant Unilever, for instance, recently said it will label all of its 70,000 products with the carbon emissions associated with their production and transportation.

While there are tools that can calculate emissions for various agricultural and other products, the challenge for Just Salad was dialing in those measurements for each of the dozens of ingredients on its menu and then for each menu item, Noonan said. The chain worked with MBA students in New York University’s Stern School of Business to do some of that “heavy lifting,” she said.

Stern students also developed a Microsoft Excel-based calculator for the chain to measure carbon emissions for ingredients it adds down the line.

The results of the process could affect Just Salad’s menu going forward, Noonan said. For instance, the calculations showed the impact cheese and dairy can have on the overall emissions of a salad, she said.

“We have definitely taken that to heart and committed to sourcing, for example, a plant-based cheese in the next couple of years,” she said.

The results also highlighted some sustainability successes: A salad containing Beyond Beef was among the 10 items with the lowest emissions, Noonan said, offering consumers a meaty option with a smaller footprint.

More precise details about how emissions were calculated will be released in September, Noonan said.

Not all restaurants have the resources to carbon-label, but there are other ways they can boost sustainability, Noonan said.

Making plant-based substitutions wherever possible is one place to start. Just Salad in April relaunched its smoothie menu without animal-based dairy products, replacing dairy milk with oat milk manufactured by Oatly—which discloses the carbon footprint of its products.

“I think it’s a matter of supporting wholesale food manufacturers that have gotten onto the carbon labeling train or just finding those plant-based substitutes,” she said.

Restaurants should also make sure their plant-based menu items are as enticing as possible.

“We have to go beyond calling a veggie burger a veggie burger and call it something that is going to be really appealing,” Noonan said. “So there’s lots of low-hanging fruit before you get to carbon labeling.”

Will carbon labeling eventually be as ubiquitous as calorie counts on menus?

“For this to become a standardized thing, we have to think about uniformity across calculations,” Noonan said—a set of agreed-upon boundaries for how carbon emissions are measured. That will require collaboration, funding and likely policy support, she said.

For now, Just Salad sees itself as setting an example for how the industry can reduce its impact on the environment.

“The more challenging and exciting part is contributing to a social shift where people do really start thinking about budgeting their carbon in the way they think about budgeting calories, money, steps on their iPhone,” she said.

UPDATE: Just Salad's unit count has been updated to account for international locations.