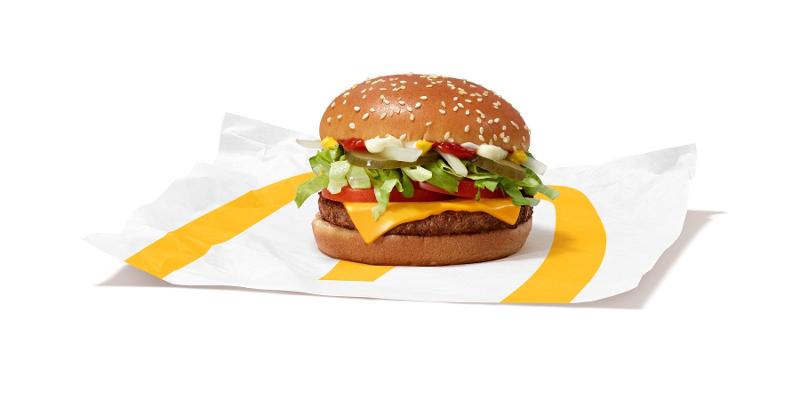 McDonald's will test its plant-based McPlant burger in the U.S. in November./Photo courtesy of McDonald's

McDonald’s McPlant burger is coming to the U.S., at least for a while.

The burger giant said on Thursday that it is bringing its plant-based burger stateside for what it calls a “small operations test” at eight locations in different parts of the country.

The test will begin Nov. 3 for a limited time, “while supplies last.” The locations are in a wide variety of communities, including Irving and Carrolton, Tex., Cedar Falls, Iowa, Jennings and Lake Charles, La., and El Segundo and Manhattan Beach in California. The test is expected to run through early December.

The Chicago-based burger giant chose the restaurants to get a good sense of the operational impact of making the plant-based burger alongside Big Macs and Quarter Pounders.

The test will be the first time that McDonald’s will sell its plant-based burger in the U.S. The burger giant has been more deliberate when it comes to such products even as many competitors have launched plant-based sandwiches across the country.

That includes its rival White Castle, which largely kicked off the plant-based craze at fast-food restaurants with the 2018 introduction of its Impossible Slider, based on a product from Impossible Foods. Burger King, meanwhile, has pushed hard its Impossible Whopper and is now testing plant-based chicken nuggets. Numerous other chains, including Dunkin’ and Starbucks, have tested their own plant-based items with generally mixed results.

A McDonald’s plant-based burger in the U.S. on a national scale could take the plant-based meat trend even further into the mainstream and could ignite even more of its use at fast-food and other restaurants domestically.

Thus far, the company has limited its tests of plant-based products to other countries where demand for vegetarian options is higher. That includes a highly publicized test of a Beyond Meat plant-based burger in Canada in 2019.

Last year, the company announced the creation of its McPlant brand, creating a platform that could be used for plant-based burgers around the world and giving its different global markets options to serve the product. It later announced a deal with Beyond Meat to develop the burgers. Former McDonald’s CEO Don Thompson was an early investor in Beyond Meat and is on the board.

The McPlant has since gone on sale in a handful of countries, including Sweden, Denmark, the Netherlands, Austria and the U.K., often in tests or limited-time offers. The company generally tests things before releasing them nationally.

The patty for the McPlant is made from ingredients like peas, rice and potatoes. It is served on a sesame seed bun with tomato, lettuce, pickles, onions, mayonnaise, ketchup, mustard and American cheese.

McPlant is not a vegan burger, at least in the U.S. The company will be preparing the product on the same grills as it makes Quarter Pounders and Big Macs. The cheese and mayo are also not vegan. The product is geared toward meat-eating customers who want to consume more plant-based meals, a substantially larger portion of the population than vegetarians or vegans.

Exactly what happens after the operations test remains to be seen, but it appears that the burger is set for a wider release at some point. “You’ll have to stay tuned for future McPlant availability updates coming out of our tests,” the company said. “We can’t share that secret sauce just yet.”