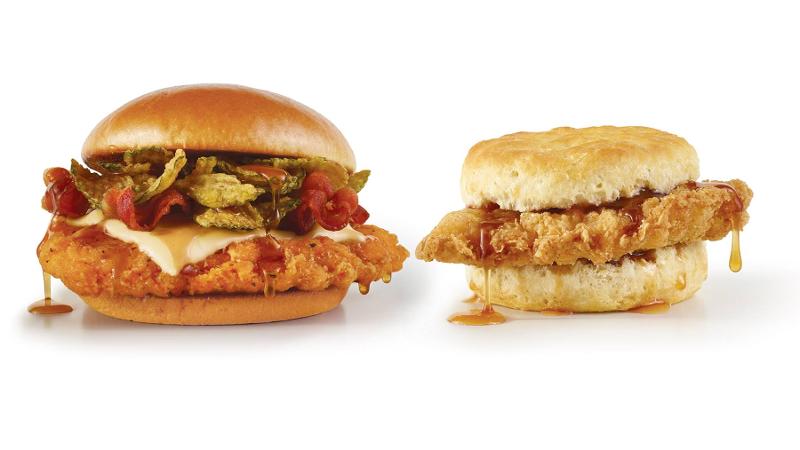 Wendy’s wants to spice up its breakfast lineup.

The Dublin, Ohio-based burger chain on Wednesday announced the Hot Honey Chicken Biscuit, its first new addition to the morning lineup since the company introduced the daypart nearly two years ago.

It’s one of two new chicken sandwiches the company announced on Wednesday, including the Hot Honey Chicken Sandwich. Both of them feature chicken breast drizzled with a hot honey sauce made with habanero pepper.

Chicken on its own is “bland,” John Li, vice president of culinary innovation with Wendy’s, told a group of reporters and bloggers on Wednesday. That makes it a great place to try new flavors. “It becomes a painter’s canvas to build flavor,” he said. “Chicken is going to be our canvas. We are going to play with it and own it and embrace it.”

The breakfast sandwich, priced at $3.19, will feature a chicken fillet topped with hot honey and served on a buttermilk biscuit.

Wendy’s is also offering a “Hot Honey Dip Cup” for customers “not ready to commit” to getting the spicy honey on a sandwich.

Wendy’s has been working on the product for two years and has tested numerous types of peppers before settling on the habanero pepper. “They have a ton of flavor,” Eryn Bennett, manager of culinary and product innovation, said of the pepper.

The sandwiches give the company new products to compete in a competitive market for chicken. Fast-food chains have been relentlessly offering new products in recent years to remain competitive, and companies like McDonald’s have vowed to continue developing new products. Li, however, believes Wendy’s has more permission from customers to offer different types of chicken products.

“We have the credibility and we have proven that we deliver flavor innovation on that chicken,” he said.

Customers also have developed a taste for the chain’s Honey Butter Chicken Biscuit, which has built a huge following.

The company introduced its breakfast daypart with a relatively simple menu, and this new addition isn’t much more complicated. Simplicity is vital considering labor challenges and the fact that for much of the daypart the chain’s restaurants are open for drive-thru only.

The Hot Honey biscuit, Li said, “brings forward a new flavor profile not yet seen on the breakfast menu, while building on the success of that simple, old-school Honey Butter Chicken Biscuit.”

Wendy’s said it plans to give customers a free Hot Honey Chicken Sandwich when customers make a purchase of $15 or more on DoorDash.