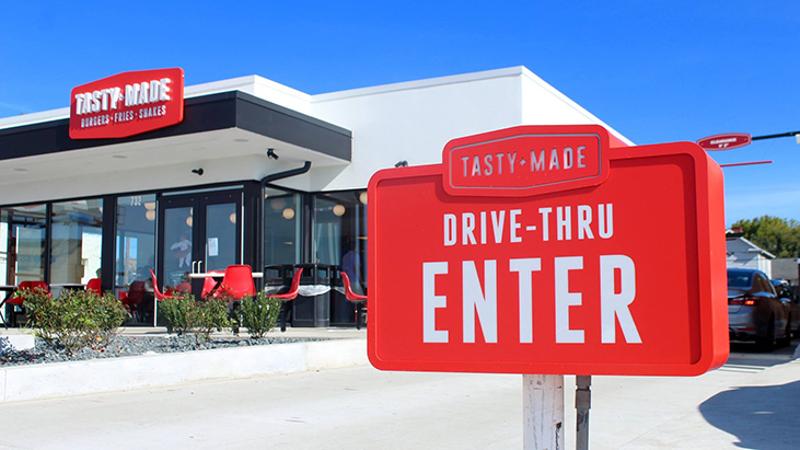 Similarities abound between Chipotle’s just-opened Tasty Made burger concept and such obvious models as Five Guys and In-N-Out, from the scaled-down menu (just seven items) to the retro uniforms (1950s style all the way). But neither of those stellar successes boast a condiment like the new competitor’s Tasty Bacon Sauce.

The topping is given as much play on the menu as such marquee options as burgers and fries, with its own section and extended description (“move over ketchup…”). Clearly it’s intended to be a major distinction—if not the major point of difference—for Tasty Made.

The sauce is light orange in color and flecked with bits of bacon, with a smoky taste. It’s the standard topping for the new establishment’s signature burger, the Tasty Made ($4.75), but customers can order it as a side for 50 cents and add it to a regular hamburger ($3.75) or cheeseburger ($3.95), the only other sandwiches on the menu.

The menu board encourages customers to pop for the 50 cents and use the sauce as a condiment or dip for their fries ($1.95).

Sodas and four types of shakes (chocolate, vanilla, strawberry and buckeye, a favorite of the prototype’s home state of Ohio) round out the menu.

The burgers can be turned into doubles for a $2 upcharge, and the sodas are available in three sizes, ranging in price from $1.80 to $2.10.

The restaurant features an open-kitchen design and a red and white motif, the same colors used in Five Guys.

What it clearly does not resemble is a Chipotle, said Scott Ferguson, a twentysomething we dispatched from Columbus, Ohio, to Lancaster to check out the prototype.

“I did not get reminded of Chipotle at all while in the store,” Ferguson said. “Chipotle makes me think of contemporary Mexican food that might not be the best for you but most certainly is a healthier option than a lot of other fast casual/fast food restaurants. Tasty Made reminded me of the classic burger joint that you’ll get as a guilty pleasure and think of health consequences after the fact. Quite honestly, the two in my opinion were complete opposites.”

He described his cheeseburger from Tasty Made as “very good,” with “the right amount of grease and cheese," but something that he wouldn't drive the hour from Columbus to Lancaster to purchase again. However, Ferguson said if Tasty Made was close to his home, he would consider purchasing a meal "after a night out or for a fast-food craving."

He added: “I will be craving some Tasty Bacon Sauce again soon, so here’s to hoping Tasty Made comes closer to Columbus.”