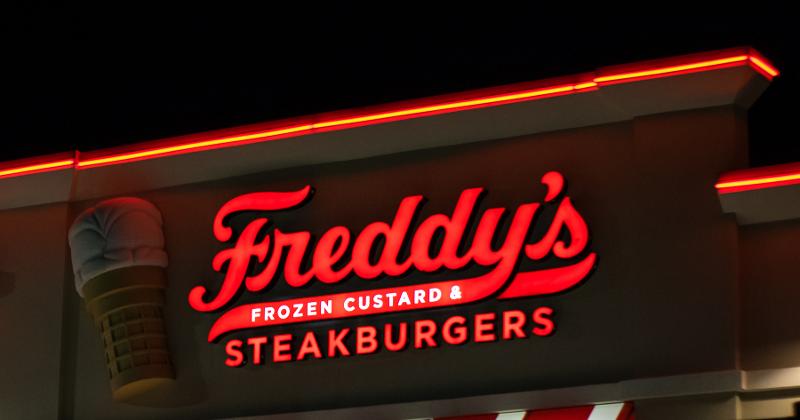 Freddy’s Frozen Custard & Steakburgers was presented with the 2021 Pacesetter Award Wednesday during the Buzzworthy Brands reception at Winsight’s Restaurant Leadership Conference in Phoenix.

The award honors a concept previously on Restaurant Business’ Future 50 List of fastest growing small chains, which Freddy’s achieved in 2011.

“The Pacesetter Award recognizes a brand that’s beyond up and coming to a brand that’s arrived,” said Restaurant Business Editor-in-Chief Jonathan Maze during the presentation. “We look at companies that will next be ranked among the Top 500 Chains.”

In 2020, Wichita, Kan.-based Freddy’s moved up to No. 62 in the Top 500 ranking compiled by Technomic, the sister company of Restaurant Business. For the past five years, the chain averaged nearly 22% system sales growth.

Freddy’s was honored not only for accelerating systemwide sales and franchise expansion, but “for the deliciousness of its food,” said Maze. “It has continued to grow throughout the pandemic.”

In April 2020, when a new location opened in Jackson, Tenn., in the midst of lockdown, there were 129 cars in the drive-thru waiting to order food.

Scott Redler, Freddy’s chief experience officer and co-founder, accepted the award, noting that the chain continues to do things “the Freddy’s way, when it comes to everything from the made-to-order food to treating the guest right—despite the big changes of the last year.”

In March, the 400-unit chain was acquired by Thompson Street Capital Partners to further drive its growth.

“Thompson understands the Freddy’s way and will be especially advantageous for franchisees seeking capital,” said Redler.

“Freddy’s growth has been surreal and the future will be explosive. It’s a reflection of the power of consistency in delivering hospitality and great food,” he added.

One of Freddy’s signatures is its fry sauce, and at the request of his daughter, Redler rigged up two fry sauce fountains as a finale for her 2017 wedding, he said.

In addition to co-founding the concept, Redler served for 19 years as COO of the chain.